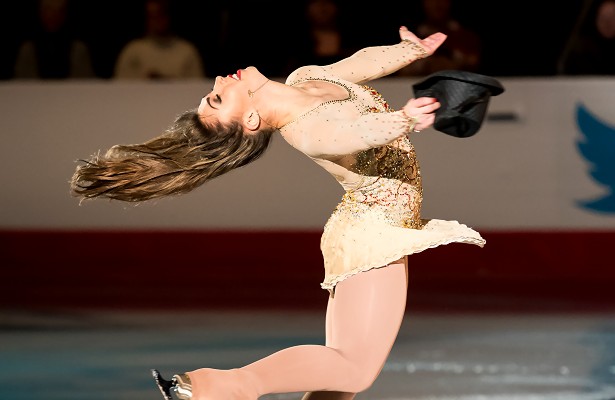 Canada’s Gabrielle Daleman is known for her power jumps, however, this season, her artistry on the ice has come through as well. This was evident in her performances at the 2015 Canadian Figure Skating Championships where she won her first national title.

“I have worked really hard on my artistry with my choreographer, Lori Nichol,” said the 17-year-old. “We really focused on this after the Grand Prix. We go into our own world where no one is around—just us—and it’s amazing! She really helps me to feel and understand the music so I can tell a story with my skating.”

This season, Daleman has put much of her focus on the quality of the elements, as well as the program components. While she uses a simpler triple toe-triple toe in her short, the jump has paid off with fairly consistent high grades of execution (GOE).

“I would rather get +GOEs for it and do it clean than underrotate a Lutz-toe,” she said. “I am also focusing more on getting level 4s on all my spins and footwork in my programs with lots of transitions in between.”

In Kingston, she landed she landed a solid triple-toe triple toe and double Axel, but fell on the triple Lutz in the short program.

“I was struggling with my breathing in the short because I had strep throat,” Daleman explained. “I took out a flying star between my spins in the center of the ice before the Lutz which caused me to be a few steps out of my pattern going into the jump. Then I almost hit the boards and it threw my timing off, so I just tried to make sure I had the rotation.”

It was the only flaw in her otherwise solid routine to Vivaldi’s “Winter” and “Allegro Lento” and Marton’s “Art on Ice”. Daleman was awarded many high GOEs for her triple toe-triple toe, and also earned a level four on all spins and footwork to place first with 62.91 points.

Véronik Mallet (61.19) and Alaine Chartrand (60.25) finished right behind the two-time Canadian silver medalist, who led by a mere 1.72 points going into the long program.

“I knew once she (Mallet) laid down an amazing (long) program, that I was going to have to do the same and give it my everything,” Daleman recalled.

Daleman nailed her opening triple Lutz-double toe-double loop and double Axel-triple toe, but stepped out of the triple Lutz and doubled her flip. In all, she landed five triple jumps in her emotional performance to “En Aranjuez con tu amor,” and finished second in the long with 123.11. Her total score of 186.02 was enough to seize the title with only 1.78 points to spare.

The crowd was on their feet for the skater from Newmarket, Ontario, who was clearly overwhelmed when she left the ice.

“That process isn’t going to sink in for a while,” said Daleman. “I didn’t even know what I was feeling. There was just a whole mix of emotions that I can’t even describe. I’m just so excited and proud!”

While the 2012 Canadian Junior champion was thrilled with the result, she “wished her skate could have been better,” noting that she much preferred her free skate over the short program.

“I love my long so much more,” said Daleman. “There are more elements, more jumps and more time on the ice. Skating my long this year when we are allowed lyrics is much more exciting, because I’m not just skating, I’m telling a story.”

It was apparent that the experience of wearing the team colors at the 2014 Olympics aided the skater.

“Performing at the Olympics has really given me more confidence, especially since I developed a stress fracture there and I had no idea what I was dealing with,” Daleman recalled.

It is not lost on the 2014 Skate Canada Autumn Classic champion that Chartrand, who is competing in her first year as a senior on the international circuit, is coming up fast and that there could be a rivalry down the road.

“We are good friends off the ice and we both train really hard,” said Daleman. “We push each other to become better skaters.”

The 2014 Olympian recently competed at the 2015 ISU Four Continents Figure Skating Championships where she placed seventh overall. The teen earned high GOEs for her triple toe-triple toe in her short program, however, she doubled her triple Lutz.

“I rushed the Lutz and didn’t take my time,” Daleman explained. “My right arm was a little high in the takeoff which caused me to be off my center.”

“I really enjoyed the long program, although it could even be better,” she acknowledged. “I want to make sure I get all my levels on the spins and footwork.”

The skater, who is coached by Andrei Berezintsev and Inga Zusev, learned that she definitely belongs in the top 10 internationally.

“I know I can be one of the top contenders at every competition I go to,” said Daleman. “I’m now competing against girls I watched on TV a few years ago, and it’s such a thrill! I plan to keep training hard.”

Daleman will be competing in her second World Championships later next month in Shanghai, China. She was 13th last year, and admits that it was a whirlwind for her at that time.

“I had just competed at the Olympics the month before where I didn’t have the performance I wanted and was still trying to recover from a stress-reaction in my right foot,” she explained. “Being new to senior competitions last year, I also felt I needed to have all the big tricks in my programs, including seven triples in my program with a triple Lutz-triple toe.”

As a national champion, Daleman feels confident going into worlds this year, and hopes to skate two clean programs and place in the top six.

“I’m going to Shanghai as the number one Canadian lady and I feel I have the full support of my country behind me,” said the skater, who trains in Richmond Hill, Ont. “I’ve competed on the senior circuit this year and have shown that if I skate clean, I can be a threat. I have been working hard on my second mark and I think this will show in this competition. I am really looking forward to showing the world that Canada has great female skaters.”