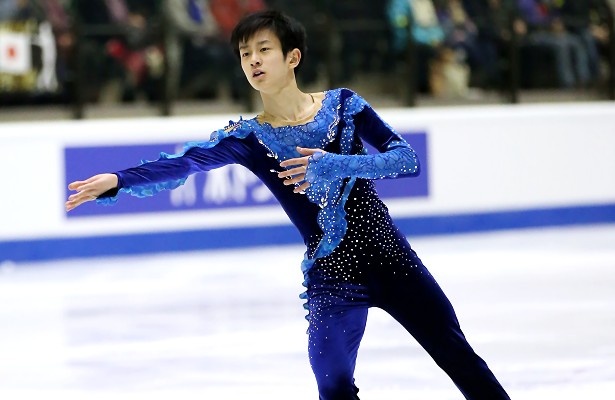 Japan’s Sōta Yamamoto, who debuted on the ISU Junior Grand Prix (JGP) two years ago, has his sights set on the World Junior Figure Skating Championships title. Ever since Daisuke Takahashi took the gold in 2002 in Hamar, Norway, Japan has produced more winners than any other country to date. Yamamoto’s goal is to join those ranks.

Born in Osaka, Japan, in 2000, Yamamoto started skating after he watched Russia’s Evgeni Plushenko’s performances at the 2006 Olympic Games in Torino, Italy.

“Plushenko has been the skater I admire since then,” said the 15-year-old. “However, he seldom competed in the past few years, and I cannot see him skating (competitive programs) anymore. So in recent years, Yuzuru Hanyu is the skater I look up to in my heart.”

In fact, because of his long limbs, slim body line and huge jumps that remind people of his idol, the Japanese media have taken to calling Yamamoto “Hanyu II.” This unfortunately also reflects the expectations placed on the young skater; especially after he delivered good results at the JGP series last season where he placed second in France and Estonia, as well as the Final in Spain.

Like his idol, Hanyu, who is considered the best in the class in all single’s elements such as jumps, spins and skating skills, Yamamoto also pursues to be an all-around skater.

“I would like people to know me as a well-balanced skater,” said the Osaka native who now trains in Nagoya. “Some people say I have good skating skills, while some people say the quality of my jumps is high, etc. So I think I don’t have a clear weapon, but instead I am keeping a good balance.”

Nevertheless, the 2015 World Junior bronze medalist revealed that his focus this season is to enrich his arsenal of jumps. He is aiming to stabilize the triple Axel, which he started to add to programs last season, and is also planning to add the quadruple toe.

“This season I want to challenge one quad toe in my free skate, and I need to land triple Axels perfectly in both of my programs,” said the Japanese junior silver medalist. “At the end of the day, jumps consists of the biggest part of scores, so I put it as my first priority for now. I also want to land the quad solidly at my first competition.”

Yamamoto opened his season earlier this month at a regional event called “Summer Cup” in Shiga, Japan. The skater fell on an attempted quad toe and also popped both of the triple Axels in his free skate. Although he won the event, he felt “frustrated” with the total score of 194.56 and his overall performance.

“I failed on the jumps, didn’t pay enough attention to the presentation, and my spins were not as good as usual,” explained the 2014–15 JGP Final silver medalist. “On the other hand, I feel glad that so many problems were exposed. I want to tackle them one by one before international competition starts.”

Aside from the jumps, the Summer Cup winner also realized that he needs to keep the delivery of choreography in mind during competition.

“Recently during trainings, I am always aware of the choreography,” Yamamoto noted. “However, in this competition I was too focused on the jumps, and lost the sense of presentation of the programs. That’s what I regret and what I want to pay more attention to from now on.”

This season, the skater decided to replace both his short program, which got him a junior record score in Barcelona, Spain, and the long program. His new short program is a flamenco piece entitled “Poeta” by Vicente Amigo, which former world champion Stephane Lambiel used to skate to for two seasons. Although Kenji Miyamoto choreographed this program, Lambiel himself gave Yamamoto some advice during a training camp arranged by the Japanese Skating Federation.

“I keep in mind his advice on choreography and performance,” said Yamamoto, who is coached by Hiroshi Nagakubo. “I am not good at interpreting music with ups and downs, but I want to improve through the season.”

As for the long program, which was also choreographed by Miyamoto, he chose Tchaikovsky’s “Piano Concerto No.1.”

“This is what Maxim Kovtun (Russia) skated to two seasons ago,” he recalled. “When I watched him skate, I thought this music might fit me well, so I made the decision.”

Looking ahead into the upcoming season, Yamamoto said his biggest goal is to “win the junior world title,” however, he clearly stated it wasn’t going to be easy.

“Nathan Chen from the U.S. recently participated in a domestic competition in the senior category, and in the free skate he landed two quads and one triple Axel in the second half,” Yamamoto observed. “The fact that he is able to bring such an A-game to his first competition this year shows that he is going to have a very strong season.”

“I think there will be many good skaters coming from behind, as well,” he added. “Therefore, I cannot feel overconfident at all.”

Coincidently, Yamamoto will be going up against Chen, who placed fourth at the junior worlds last season, at his first JGP event next month in Colorado Springs, Colo. Regarding this re-match, the Japanese teenager, who overtook Chen by a mere 1.6 points in Tallinn, Estonia, doesn’t feel he has any advantage.

“In the junior worlds last year, I got the bronze because I performed my free skate without any big mistake,” said Yamamoto. “Nathan made mistakes in both his programs, but the gap between our scores was minimal. Therefore, there is no way I can feel comfortable.”

Although this early match-up may increase the difficulty for him to earn points to qualify for the JGP Final, the defending silver medalist expects some positive learning from it.

“Through competing against him, I think many problems in my skating will be exposed and I can gain more experience, so I think it is a very good thing,” said Yamamoto. “In order to compete against him… no, I should say to ‘win over him,’ I need to land my quad and triple Axels perfectly. I want this challenge.”

The junior world title is not Yamamoto’s only goal this season. The teenager is also eyeing the national podium at the senior level—the event he finished sixth last season.

“I want to move up to the senior circuit next season, and then going to the 2018 Pyeongchang Olympics will be my biggest goal,” he offered. “Every season towards Pyeongchang is very important and time is very limited. Therefore, although this season I am still on the junior circuit, I will compete in the senior category at Japanese nationals and shoot for the podium.”

Japan arguably has the deepest field in the world in the men’s discipline of figure skating, and Yamamoto is very well aware of the high rate of difficulty that his competitors are bringing to the table.

“There are excellent skaters like (Takahito) Mura, (Takahiko) Kozuka and (Daisuke) Murakami,” he noted. “To compete against them, the minimal requirement for me is to land a perfect quad toe and triple Axels, together with two programs without any mistake. I will train hard to achieve the goal.”

The 15-year-old further revealed more of his thoughts on the upcoming 2018 Olympics.

“I seldom talk about this, but I have a dream,” he said. “I really want to go to the Olympics together with Hanyu (Yuzuru).”

Recently, it was widely reported that the reigning Olympic champion considered retiring after Pyeongchang.

“I saw the news,” said Yamamoto. “It made my determination to go to Pyeongchang even stronger. Although it is my dream to win the gold medal, for Pyeongchang, my goal is to make the team and to perform the best I can. Then I want to aim for the gold in the next Olympics.”

However, the ambitious skater realizes that it’s too early to focus on Pyeongchang now.

“I need to first pay attention to every upcoming competition, tackle the problems that I find one by one, and reflect the good learning into future,” he summed up.