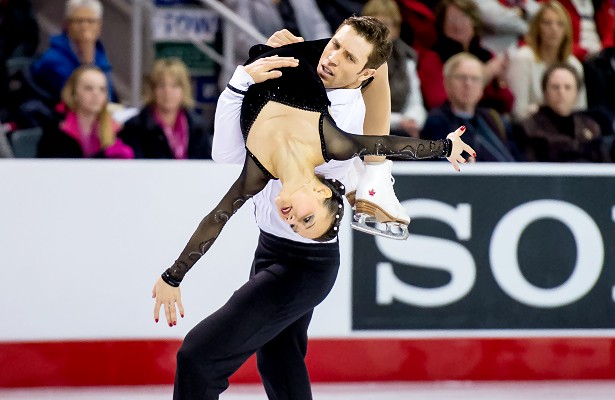 The skaters, both of whom had former partners, wasted no time in ironing out their modus operandi as they had to learn different techniques for their lifts, throws, and twists.

They placed first at their international debut at the 2014 Warsaw Cup in Poland in November, and again at the 2015 Skate Canada Challenge a month later.

The skaters adjusted quickly enough to each other to be aware of their body positions, placements and do most of the difficult elements. However, it still takes a long time to hammer out all the details such as adjusting the takeoffs, adding quality to the skating, and making the elements appear effortless.

“Nothing seemed really hard,” recalled Ilyushechkina, who was released from the Russian Skating Federation in mid-October. “Everything was doable. The first week of the tryout, I landed the first throw triple loop and the throw triple Lutz came soon after. We played with different lifts off ice and did a lot of variations.”

“It is always good to have options,” she continued. “We picked the best and worked on ice. We are still creating new lifts and each one requires some time. It is an endless process and time to time we still need to break it down and come back to the basic exercises. We are really looking forward to pushing the quality of our twist.”

In addition to training at the Cricket Club, the skaters also train at the York University Canlan Sport Center.

“We love our team of coaches, as well as our choreographer, David Wilson,” said Moscovitch. “He’s a huge part of our team. We also have a fantastic off-ice team to support all facets of our training and recovery.”

The Warsaw Cup and Skate Canada Challenge were two of their first competitions as a team and the skaters were able to learn more about each other and how to deal with and manage the stress of competition.

“I felt that we were a team, that I would be supported and helped if I needed to, and I would be ready to do the same,” said Ilyushechkina. “Both on and off the ice.”

“I think both of these competitions gave us a sense of what we were working with when it came to competing,” her partner added. “We both had extensive experience skating pairs at a high level, but working with a new partner requires time and experience together before you can start to feel completely comfortable. Both of those experiences helped us in that sense and also gave us a boost of confidence moving into the next phase of the season.”

Going into nationals, the team wanted to stay focused on their job. Both skaters admitted to a lot of external distractions and pressures, most of which were positive, but as a new team they wanted to make sure they took their time.

“We had trained very hard and were ready to skate to the best of our abilities at that time,” recalled Moscovitch. “I was excited to be back at nationals and to be in front of a Canadian crowd.”

“I was happy to come back to Kingston five years later,” said Ilyushechkina, who won gold at 2010 Skate Canada with former partner Nodari Maisuradze. “It was my first experience in Canada and I fell in love with it. Only clear and bright memories connect me with this place and I was going to enjoy every moment of it. I was full of excitement and I love the Canadian audience!”

The 2014 Warsaw Cup champions had a good showing at the 2015 Canadian Tire National Skating Championships where they placed a strong second. While proud of their efforts, the team knows there is still room to improve.

“We came from two different figure skating schools and had different ways of thinking,” said Ilyushechkina in regards to training and skating. “Being a new team, we needed to catch up really quick and didn’t really have a time for the adjustment. It is a lot of physical and mental work as well. I’m glad that we put everything together.”

“Nationals was bitter sweet in a way,” said Moscovitch. “I was very happy with how well we kept our composure as a team throughout the week, but I also knew that we were capable of skating better. We practiced well and battled hard until the end of both programs. I was elated to have such a great response from the crowd and immense support. Coming in second and making the world team was our ultimate goal.”

The following month, the team competed at the 2015 Four Continents Figure Skating Champions (4CC)—their first major ISU championship together as a team—and finished sixth with new personal best scores in each aspect of the competition.

“It was my first 4CC and our first 4CC as a team,” Ilyushechkina noted. “After nationals, we had a long break with no competitions. This gave us time to focus on pieces and parts, clean them and put them together. We showed the difference in quality of elements which we’ve been working on and I felt good about it. I really love figure skating and love to skate for people. When people came and said how much positivity they got from watching us, for me it was the best prize.”

“The long program actually felt kind of hard,” said Moscovitch. “It was our first time travelling to Asia as a team and took a couple of days to start gelling. By the time we got to the long program, we were ready to go and skated our strongest long program of the season, but it wasn’t an easy one. We worked hard from beginning to end.”

As with the Four Continents, the world championships were a first for Ilyushechkina and for the skaters as a team.

“I was pretty confident,” said Ilyushechkina. “Training was going good and I was ready to do an excellent performance.

It was to be Moscovitch’s fourth appearance as he had competed at worlds three times with former partner Kirsten Moore-Towers.

“I was excited and ready to be back at worlds and show everyone how much progress we had made in such a short time,” he said. “I felt great about how well we had prepared and was motivated to skate our best.”

The Canadian silver medalists placed 13th at the 2015 World Figure Skating Championships, and the skaters chalked it up as nothing more than inexperience as a new team.

“I think that we learned that we are on track for being a new team, but that we have a lot more work to do as a team to improve our cohesiveness and seamlessness in our skating which in turn will help our consistency,” said Moscovitch.

“With every competition, I feel I’m getting mentally stronger,” his partner added. “In Shanghai, it was a huge ice rink full of people, and for me, it was a big step to set myself to do my job no matter what.”

Since worlds, Ilyushechkina, 23, and Moscovitch, 31, have been working on new elements for this season. They also asked their fans via Facebook which music they should skate to for the short program. Both their new short and long program were choreographed by David Wilson.

“It was complicated to choose the music for our second season,” Ilyushechkina confessed. “We looked up a lot of options, but couldn’t make a choice, so we asked our fans through the Internet which image for us they would like to see. We had tons of ideas. People really got into it and were very active. We are very thankful for that! In the end, we chose Led Zeppelin’s ‘Since I’ve Been Loving You.’ It is something totally new for me and for us as a team.”

Their free skate will be to Rachmaninov’s “Symphony No. 2 in E minor.”

“It is classically styled and we are very excited to show more diversity in our programs this season,” said Moscovitch.

When not training, Moscovitch enjoys martial arts, other sports, and playing the guitar. He is also a certified Krav Maga instructor and will teach a class or seminar when time allows.

Ilyushechkina prefers to study and read in her spare time.

“I also like beading,” she said. It relaxes me.”

Ilyushechkina, who was born in Moscow, Russia, also got the chance recently to try horse-back riding, which she loved.

“I also did outside rock climbing and would like to go more,” she said. “Recently, I also tried to play squash. There are so many things which I tried for the first time and really like.”

In the future, Moscovitch would like to attend the University of Toronto for business, while Ilyushechkina has expressed an interest in economics, law, and/or management.

The team opened their season this summer at Skate Detroit and attended Canada’s National Team/High Performance Camp earlier this month. They will compete later this week at the 23rd Ondrej Nepela Trophy—an ISU Challenger series event—before their two Grand Prix events in China in Japan later this fall.

“I think that with this being our second season together, we can have our sights set on bigger goals,” said Moscovitch. “We want to keep improving our skating and the quality of our elements, but we would also like to raise our world standings. We are both very hard-working and ambitious, and therefore, see no reason for not aiming for the top.”