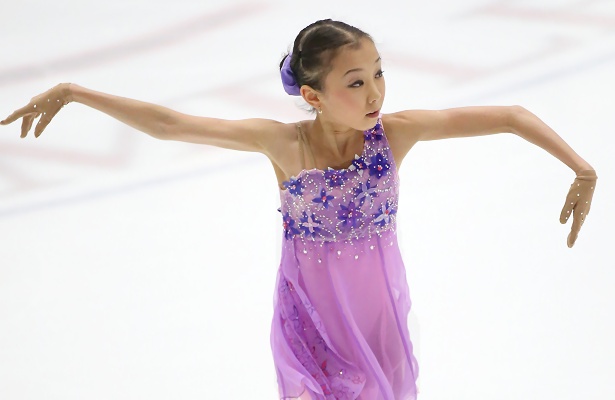 Last season, Kazakhstan‘s Elizabet Tursynbaeva finished fourth at the 2015 ISU World Junior Figure Skating Championships and won medals in every other competition she entered. Olympic bronze medalist Denis Ten was the first to put Kazakhstan on the map of figure skating, however, Tursynbaeva shows that there is more talent coming from the central Asian country.

Tursynbaeva started early and successfully into the new season with a win at Skate Detroit earlier this summer. Then two weeks ago, she captured the silver medal at the 2015 U.S. International Figure Skating Classic in Salt Lake City, Utah.

The 15-year-old’s success last season was surprising as she trained most of the time alone with her mother, who is not a skating coach, in a shopping mall ice rink in Moscow, Russia. The Kazakh Champion had started to work with Brian Orser, who coached her at competitions, but didn’t get a visa in order to move to Canada until last spring.

“It was very hard to prepare (for competitions) on the public skating sessions,” said the skater’s mother, Pashakan Sultanalieva. “There were lots of kids on the ice and they can’t give way. It was difficult to do the jumps. It was terrible to train this way since September (2014)”.

Tursynbaeva was finally able to join Orser’s school in Toronto, Canada, this past April.

“I dreamed a long time to be coached by him,” she said. “He is a very good coach.”

Tursynbaeva was born and grew up in Moscow, Russia, where she started skating by following in her older brother Timur’s footsteps. While Timur’s career ended early due to injury, Elizabet stayed in.

After finishing 13th at the Russian Junior Championships in 2013, the family decided that she should represent Kazakhstan, where the family is originally from. As soon as they made the switch, it became difficult to train in Russia as the coaches were focusing on the Russian skaters.

“We were part of the Russian National team, but we wanted to skate for Kazakhstan,” Sultanalieva explained. “The coaches didn’t work with her anymore. They said it was the Olympic year and they don’t have the right to coach others. Again, we were without a coach and skated in the shopping mall for about four months.”

“Then we wrote a letter to Brian Orser,” she continued. “We sent him videos of her performances, on how she played the violin and everything she does. He liked it and sent us an invitation and said he likes her and would work with her.”

Tursynbaeva is actually a professional violinist and figure skating started as a hobby. She also plays the piano.

“She has been playing the violin for eight years and she performed in public,” her mother noted proudly.

Now, however, the multiple ISU Junior Grand Prix medalist is focusing on skating and she loves it.

Tursynbaeva, who looks up to Yuna Kim “because of her jumps” and to Mao Asada “because of her choreography, skating skills and triple Axel,” hopes to leave a mark herself in the sport.

“I already tried it (the triple Axel) in Toronto,” she said, smiling. “It was not bad. I even landed it. It is not scary.”

The talented teen is looking forward to competing mostly at the senior level this season.

“I’ll have a lot of competitions this year,” the Kazakh skater pointed out. “I want to compete at Junior and senior Worlds and also the Youth Olympic Games. I would have liked to go to the Four Continents as well, but unfortunately they take place at the same time as the Youth Olympics. I like to compete. I didn’t have enough big competitions (last season), because I was not age eligible. But now I want to go to all competitions.”

This season, the student of Orser is skating to “Send in the Clowns” (performed by Susan Boyle) for the short program which was choreographed by Sergei Komolov.

“This music is beautiful and soft,” said the young skater. “I picked it myself, like I always do by the way.”

She is keeping her long from last year to “Papa Can You Hear Me” (performed by Barbara Streisand), choreographed by David Wilson, as she liked the program and the music.

Sultanalieva describes her daughter as “calm, level-headed and independent.”

“For example, I never had to do homework with her. She does everything herself,” her mother said, adding that her home-schooled daughter wants to finish school ahead of time in order to focus more on skating.

On the ice, Tursynbaeva is usually able to stay calm.

“At Junior Worlds I was a bit nervous before the short program, because I didn’t compete for two months, but in the free skating I almost wasn’t nervous at all,” she recalled. “I realize that I am alone on the ice and everybody is watching me, but I just imagine that I am at practice and I just do what I do every day.”

Tursynbaeva, who said she wants to compete until she is “23 or 25 years old,” plans to get involved in charity after her athletic career. First, however, she would like to “see that figure skating develops further in Kazakhstan” like her famous compatriot Denis Ten.

Being a Junior Grand Prix medalist and ranking fourth at the Junior World level already makes her the most successful female skater from Kazakhstan.

Tursynbaeva is looking forward to her Grand Prix debut this fall at Skate America and Skate Canada, and the fact that the competitions are back to back doesn’t seem bother her.

“It won’t be the first time for me and I am fine with it,” she said. “My goal is as always — to skate clean in both programs.”