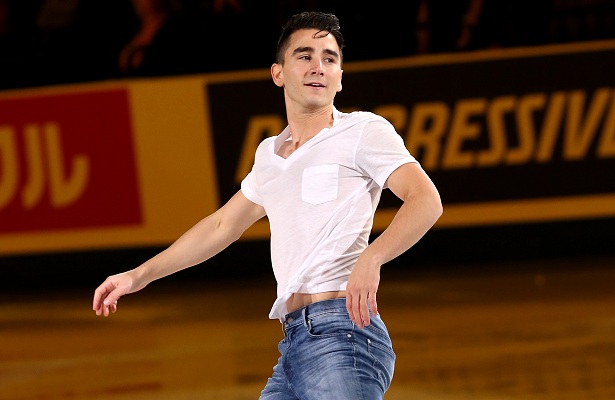 USA’s Max Aaron admits that he struggled a bit during the past two figure skating seasons and now thinks of himself as the “older guy.”

“At the time, it was the Olympic year,” the 23-year-old explained. “The year I won (U.S. title) was 2013 and 2014 was coming up. Not only did I want to make the (Olympic) team, I wanted to be a medalist and I was shooting for the moon. In actuality, I should have taken the time to develop a skill.”

It wasn’t in the cards for the 2013 U.S. Champion, who finished third and fourth at the 2014 and 2015 U.S. National Figure Skating Championships, respectively.

“You get to a point where you’re going or staying static, and at the time I was staying static,” said the skater from Scottsdale, Ariz. “Once you stay static, you get passed up. There are so many great young men, not only in the United States, but in the world, that are coming up and beating the older guys.”

Since then, Aaron, who has placed in the top 10 at both his outings at the World Championships, has a learned a great deal and feels he is getting back on track.

“I’m looking forward to getting stronger and still performing,” he offered. “It’s a performance, it’s not all about jumping. I was continuing to do that and it doesn’t get you very far. Having a performance and enjoying it, listening to the music the entire time… it feels good to do that.”

The three-time U.S. International Classic champion realizes he has to continue to learn and grow despite his experience on the world level. He also feels he can learn a lot from his competitors.

“I learn a lot from Jason (Brown),” Aaron said of his fellow countryman. “He’s so consistent. He’s a great performer. I love watching him perform, and by watching him, I can get better and better. So you’re going to stay static or you’re going to grow. I wanted to grow and I wanted to become one of the best. If I can’t, I’m going to go down swinging. That’s going to be my story.”

“Helping Max to develop as an artist has been a top priority every year for the last seven seasons,” said his coach, Tom Zakrajsek. “His continued growth and understanding of the music will help him become a major force in men’s figure skating on the world stage.”

Aaron continues to work with his team psychologist and coaches (including Becky Calvin) on his mental preparation. In the past, he felt he was trying to do everything at once and that he should have taken the time to focus on one thing at a time.

“I want to be someone who can perform under pressure,” said the skater who trains in Colorado Springs, Colo. “We have a couple things that we do, but by all means, this is just a start and I still need to learn.”

And it seems to be working as the skater just won his first Grand Prix (GP) event at Skate America last week with two new programs choreographed by Phillip Mills.

In his short program to music to from Nessun dorma, the 2013 Skate America bronze medalist opened with a good quadruple Salchow-triple toe combination, followed by a solid triple Axel and triple Lutz which garnered high grades of execution (GOE) from the entire judging panel. He also showed good footwork and spins and finished first with 86.67 points.

The skater was clearly emotional about his performance, which earned a new personal best.

“That was really hard,” said Aaron. “It was the best short I’ve ever had. 86 is a great score, but I’m more pleased that I was able to perform the way I’ve trained. The number doesn’t matter to me.”

His goal at the event was to complete two clean performances and he was halfway there. The last time the Aaron felt so sure of himself was during the 2012-13 season when he skated his “West Side Story” routine.

“It was more that I didn’t have a sense of the pressure,” recalled the former U.S. National junior champion, “that it was just me skating my skate. I felt like I got lost along the way after feeling the pressure of being under the lights and representing my country at a world level. I feel like now I’m getting back to myself and wrapping my head around that. I’m learning how to up my mental game and my components. I want to become a different skater. I want to be one that’s reliable and one who can win some medals for the U.S.”

Aaron’s free skate in Milwaukee, Wis., was highlighted by two quadruple Salchows (one in combination with a double toe) and six clean triples. His only mistake was a step-out in a double Axel at the end of his routine to music from the Black Swan. While he finished second with 172.28 points, he defended his lead with a total score of 258.95 to win the gold.

“It feels great to come out here and do what I’ve done in practice every single day,” said Aaron. “I had a little mishap on the last jumping pass when I started thinking about the whole performance and what I had put out there. Prior to that, I was staying in the moment and listening to the music. I enjoyed every second of it.”

This was to be Aaron’s fifth appearance at a GP event of which he has only earned three bronze medals, so he was extremely pleased with his first win.

“This win is amazing!” he said. “It’s my first big win in a while. I’m not going to think about it a lot. I want this to be the start of a lot of things. I wish I could enjoy it a lot more than I can, but I hope this is the first of many. I can’t wait to see where I can go in the future.”

Aaron will compete again next month at 2015 Trophée Éric Bompard in Bordeaux, France.