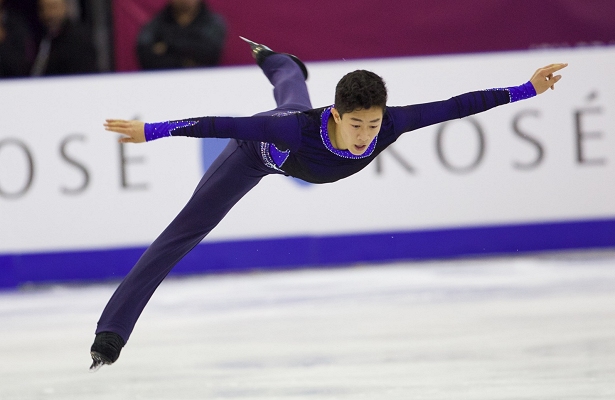 USA’s Nathan Chen skated to gold at the 2015-16 ISU Junior Grand Prix (JGP) Final in Barcelona, Spain, this past Friday. It was the fourth appearance at this event for the 16-year-old who won bronze two years ago in Fukuoka, Japan.

“I’m very excited that I was able to become Junior Men’s Grand Prix champion,” he told the press. “It’s a big accomplishment for me. I was able to do exactly what I wanted to do coming into the event and I am very happy with how I placed.”

Chen took the lead in the short program with a new personal best of 78.59 points with Russia’s Dmitri Aliev trailing close behind. The skater, who trains in Artesia, Calif., nailed a triple Axel, triple Lutz-triple toe and a triple flip in his routine to a Michael Jackson medley.

While all of his spins were rated a level three, the skater was the only one in the Junior men’s field to earn a level four for his step sequence in the short program.

“I’m glad I could pull it off, said the 2014 World Junior bronze medalist. “It’s been getting better this season and I think I’ve put more effort in this season than before. I love Michael Jackson. As kids, we used to moonwalk across the floor, but my choreographers chose it for me because they wanted me to do something out of my comfort zone.”

Chen kept his short program from last season as he felt it was starting to grown on him and he could better reflect the character that he wanted.

While his long program to Saint-Saëns’ “Symphony No. 3” wasn’t perfect, Chen still led the field by more than 12 points (146.45) to win that segment and overall (225.04). He turned out the landing on his opening quad Salchow and then fell on his quad toe. While he rebounded and landed a quad toe-double toe combination, he fell again on his triple Axel.

Despite the errors, the 2013-14 JGP Final bronze medalist landed five clean triples and showed strong level three footwork, but two of his spins only garnered a level two.

“I was happy that I was able to put out a program I have been training for, but I was not 100 percent happy with my performance,” he admitted. “Now I’m going to be training for nationals where I’ll be competing as a senior.”

Initially, the skater had four quad jumps planned for the free skate, however, afer practice he decided it would be smarter to pull it back to three.

“Hopefully in the future I will be able to do it, but that’s just a goal for now,” said Chen, who is coached by Rafael Arutyunyan.

His main goal for this season was to build on the long program which was choreographed by Nikolai Morozov.

“We wanted to do something I’ve never done before, something powerful and strong, so he chose this symphony,” Chen explained. “Initially, the program was very soft, so he really worked out the jumps to improve. I hope by the end of the season to really be able to bring the character out.”

Now the skater will focus on the upcoming 2016 U.S. National Figure Skating Championships which will determine if he is named to the Four Continents team, as well as Worlds (junior and/or senior).

“My goal going into competitions is not to beat others, but to beat myself,” said the 2014 U.S. Junior champion, when asked regarding his strategy competing against others later this season. “I set a goal for all competitions and I like to accomplish that goal, but I like to know what the others are doing so that I can better prepare myself.”