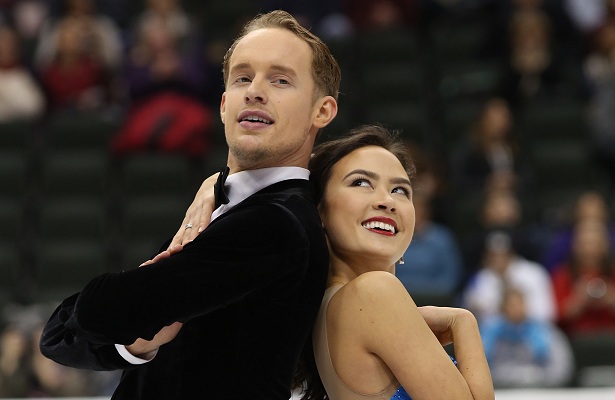 Madison Chock and Evan Bates are the current leaders after the Short Dance at the 2016 U.S. Figure Skating Championships, which is taking place in Saint Paul, Minn. Maia Shibutani and Alex Shibutani are close behind, while Madison Hubbell and Zachary Donohue sit in third.

Chock, 23, and Bates, 26, delivered a smooth foxtrot and waltz, earning no less than “2s” on every single element. They received a level four everything except for the second pattern (level three) of the waltz in which they missed one key point. They scored 75.14 points.

“We always want to skate fast,” said Bates. “I think it [the rhythm] lends to more of a lyrical program, which is what we’ve chosen, but we coupled it with the Foxtrot. It feels lively and just pleasant. This is our third short dance of the season, so we just shuffled through the deck to find what really suits us and this is it.”

The ice dancers anticipated that the short dance scores would be close with the Shibutanis right behind them by just half a point.

“We are very familiar with all of these competitors and it’s the same domestically as it is internationally for us,” acknowledged Bates. “I think it is good for us because we always have to be on our game.”

This has been the most challenging season for the 2015 World silver medalists in that they had to change their short dance mid-season. They also made a lot of changes with their free dance during the Grand Prix circuit. After the Grand Prix Final, they took a few weeks off during the holidays and came back refreshed.

“We knew we’d pushed really hard to survive through the Grand Prix [Series],” said Bates. “We’ve never been in that kind of situation before with so much change. Coming in this week, we were both relieved that we’ve had the programs set for more than a few weeks, and we’re really thrilled with how it went today.”

Maia, 21, and Alex, 24, were just as flawless, if not more so. While they met all six key points, the difference came down to the grades of execution (GOE) in their total score of 74.67.

“That was our strongest short dance performance of the season so far,” said Maia. “We’ve been working extremely hard since the Grand Prix Final, so it felt really good to not just work on the details of the program. Our technical levels really improved, so everything is headed in the right direction.”

Hubbell, 24, and Donohue, 25, didn’t disappoint either. The current U.S. bronze medalists met all six key points and earned a level four on all elements except for the partial step sequence (level three). Like the top two teams, Hubbell and Donohue earned positive GOEs on all elements and scored 71.10 points.

The 2014 Four Continents champions were really happy with their performance.

“Personally, I felt I had to warm into it a bit, but then it finally sunk in,” said Donohue. “The performance as a whole, I felt like we finally caught our first glimpse of what we’re trying to achieve in this program, and that’s the connection between the two of us outside the skating world. We’re trying to really create a moment that’s not a program, that’s not an element, that’s not anything technical or component based. It’s just a moment to take everyone in and make them feel something, and I think we got a glimpse of that today.”

Anastasia Cannuscio and Colin McManus are currently in fourth place with 63.12 points, followed by Kaitlin Hawayek and Jean-Luc Baker (63.02).