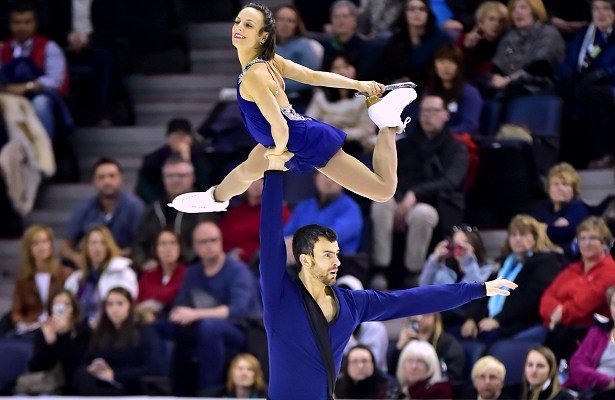 Duhamel and Radford say they’re back after a commanding free skate that helped dash memories of their mistake-ridden short program. They earned 148.72 points to complete the competition with a combined score of 221.75. The 2015 World champions landed side-by-side triple Lutzes (with a hand touch by Radford), a throw quadruple Salchow and throw triple Lutz in their “Adele” program.

“This was a U-turn from the short to the long and we need to continue on in this direction,” Radford said.

The pair proceeded Séguin and Bilodeau who garnered 141.67 points and a standing ovation with their clean skate. Duhamel credits her competitors’ scores for motivating her.

“They put out big numbers and we had to do our job,” Duhamel said. “We couldn’t melt down. We couldn’t have a performance like the [previous day]. We knew that getting into our starting position. It felt like the old days at Canadians with Moore-Towers and Moscovitch skating perfectly before us and that’s a step in the right direction for us.”

Duhamel acknowledges that they have skated after great performances which motivates them to do a good job as well.

“You can feel the energy in the building,” said the 30-year-old. “We needed that and it’s the first time this season we really stepped on the ice feeling pressure from the team before us, to be honest.”

Duhamel told a lot of folks that she would do a good triple Lutz in the long and would have felt foolish had she done otherwise. Her only error came on the planned triple toe-double toe-loop-double toe when she singled the second jump.

“That was stupid,” she said. “There is a lot of adrenaline going through me after the throw quad Salchow, so I’m always working on calming myself down for the triple toe combo.”

Radford, who will turn 31 next week, felt that they needed this kind of skate on two different levels—in this moment and on a long term time frame heading to worlds.

“We just felt a lot more in control and in the right mindset, but as Meagan said, we’ve always had our best skates in pressure situations even though it’s more comfortable beforehand,” he pointed out. “It brings out the best in us.”

Séguin and Bilodeau were another renewed pair following a strong free skate set to “A Whiter Shade of Pale” after a disappointing short program showing.

“I learned a lot from this experience and I think we were prepared for this moment,” Séguin,19, said about her improved jump landings on Saturday versus Friday.

The team landed side-by-side triple toe loops and Salchows, as well as their throw triple Lutz and loop, and ended the competition with a combined score of 211.40.

“I think I put myself under pressure instead of just ‘Go out there and have fun,’ and today this is what I did,” said Séguin. “I said, ‘I have nothing to lose, so have fun and enjoy the moment.'”

“We felt really comfortable and we’re really happy with our score,” 22-year-old Bilodeau added. “When we came back from the Grand Prix Final, we’d reached the 200s, so we were like ‘Okay, we have to set another objective, let’s face 210.’ Here, we did more than that, so now we have to reach for 220.”

Ilyushechkina and Moscovitch were third with a free skate score of 134.72. During their Rachmaninoff routine, they landed side-by-side triple Salchows, the throw triple Lutz, and a throw triple loop.

“We are happy with what we did,” Ilyushechkina, 24, said. “We could bring the mood and the emotion from the beginning to the end of the program which was one of our goals.”

The team’s only error came when she doubled the side-by-side toe loops.

In a competition that was expected to be a battle for the third spot on the world team, Ilyushechkina and Moscovitch were relieved to stand on the podium.

Kirsten Moore-Towers and Michael Marinaro rebounded from a disastrous short program when the team fell on the twist to place fourth (123.91, 183.58). Their only error in the long program came when both fell on the side-by-side Salchows.