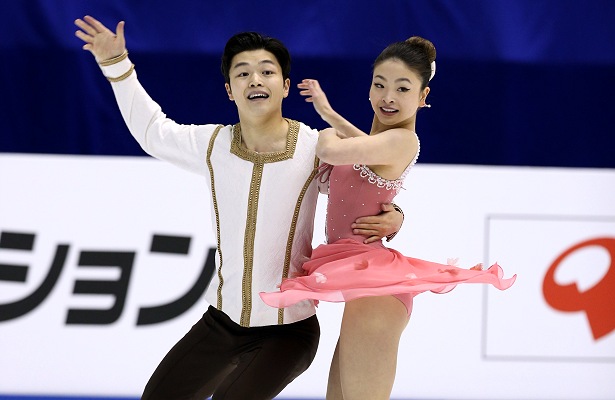 Shibutani and Shibutani delivered a very smooth free dance to “Fix You” by Coldplay, executing difficult elements almost effortlessly. The U.S. Champions collected a level four for their spectacular twizzles, lifts, spin and the diagonal footwork, and a level three for the circular steps. The siblings scored 108.76 points, a new personal best, and accumulated 181.62 points.

“It (winning) is a really gratifying feeling,” said Alex, 24. “We’ve been working so hard over the past four seasons in particular, but this season we’ve been really focused on making sure we make the most of every opportunity. This was a great opportunity today.”

The skaters were proud of how they performed both programs and are looking forward to the upcoming 2016 World Figure Skating Championships in Boston next month.

“We’ve always believed in ourselves and the group around us has always had a strong belief in us,” said 21-year-old Maia, “so it’s really been about taking each experience and learning from it and continuing to grow. We feel like we’re just starting to scratch the surface of what our potential can be and we’re really looking forward to the lead up to 2018.”

Shibutani and Shibutani had a narrow lead over Weaver and Poje following the short dance. Both teams had performed very well, however, the higher technical score—all elements were a level four—gave the brother-and-sister team with their “Coppelia” program the edge over the Canadians that danced to “On the Blue Danube” and “Annenpolka” by Johann Strauss.

Chock and Bates on the other hand, looked shaky in the short dance and finished only in fourth place in this segment. Nevertheless, the 2015 World silver medalists came back strong in their free dance set to Concerto No. 2 by Sergei Rachmaninov. Their lifts, twizzles and spin garnered a level four and the two step sequences were rated a level three. The team achieved a new personal best score with 107.59 points in the Free Dance and 174.64 overall.

The reigning ISU Grand Prix Final silver medalists admitted they had a pretty rough short dance and felt they had nothing to lose in the free dance, so they made sure to enjoy every second of their program.

“We just enjoyed skating together and I think that’s the attitude we’re going to have going forward,” said 23-year-old Chock. “It felt really good to be out there and the audience was great.”

“It’s especially important to skate well after you feel disappointed,” Bates, 26, added. “So for the performance today, I think we felt a little bit of extra motivation to leave Taipei with no regrets and a good feeling. This performance, I think, did that for us.”

Weaver and Poje looked somewhat shaky in their free dance set to “This Bitter Earth” and “Run,” especially Poje, who struggled with the twizzles and the rotational lift which was reflected in low levels for these elements. The other two lifts and the footwork were stronger, but overall, the Canadians lacked their usual flow. With 101.43 points they were ranked fourth in the free dance and dropped from second to third at 173.85 points.

Poje explained that they the ice felt different than what they were used to and it threw them off a bit.

“But that’s not an excuse for our performance,” said the 28-year-old. “We just didn’t connect the way it was in practice. We obviously are looking to bring back performances to a better level for our next competition. We’re just going to use this as a chance to learn. I did stumble in the program a couple of times and I’m not proud of that. I’ll definitely go home and work on that to make sure that that doesn’t happen again.”

“No one is perfect and we’ve had a pretty spectacular season thus far,” 26-year-old Weaver added. “Sometimes it just doesn’t happen. I think we had a few distractions—mainly the ice quality—which I think took our focus a little bit away from the normal things. Everything felt a little different, a little bit less speed, a little bit less flowing momentum.”

USA’s Madison Hubbell and Zachary Donohue turned in a strong performance of their “Adagio for Strings” by Daft Punk and had a level four for all elements except for the circular footwork. They were third in the free dance, as they were in the short, but they still slipped to fourth overall at 172.29 points.

The three-time US national bronze medalists feel that they are finally becoming comfortable and understanding who they are as a team. This event in general was an experience for the skaters, as well as the “tip of the iceberg,” and they welcomed it to part of their journey.

“We’ve worked really hard this season to change all that we felt were our weaknesses, build on our strengths and really identify who we are as a team,” said Donohue, 25. “Yesterday really affirmed that. I think we pushed ourselves out of what our program has been and into what it could be. For the free today, I think we did a great job of communicating with each other physically. In the program we really relied on our training, on our partnership and who we are as a team. It wasn’t our most powerful performance, but we learned a lot from it and we’re really happy with where we’re sitting.”

“This whole season has step-by-step been an affirmation for us,” added 24-year-old Hubbell. “We’ve been pretty frustrated sometimes. There are so many good skaters and sometimes you feel like you’re stuck. It’s not because you aren’t progressing, it’s just that everyone else is as well. I think we spent a few years losing our fire because of that and this season has been a real help in igniting our own belief in ourselves.”

Canadians Piper Gilles and Paul Poirier came in fifth with their avant-garde free dance to “She Said” and “Neverland” with 162.19 points, while their teammates Élisabeth Paradis and François-Xavier Ouellette finished sixth (146.94 points). Paradis and Ouellette had a costume failure when Paradis’ top came loose and they had to stop to fix it, resulting in a three-point deduction for “Interruption in excess.”