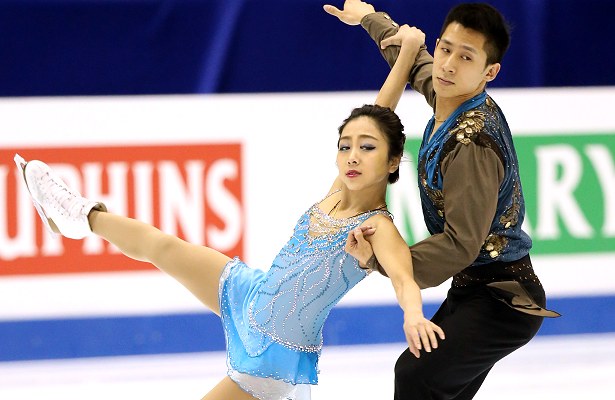 Wenjing Sui and Cong Han of China perform their free skate at the 2016 Four Continents Championships.

En route to the gold, Sui and Han hit a quad twist and quad throw Salchow in their program to “Mon Coeur s’ouvre a ta voix” from Samson and Dalilah. The current World silver medalists also completed a triple toe-double toe and three level four lifts, however, Sui missed the side by side triple Salchow and wobbled on the throw triple flip.

Nevertheless, the team from Harbin, China, achieved a new personal best score of 143.40 points and totaled 221.91 to win their third Four Continents title after 2012 and 2014.

“It is our second time to compete in Taipei and we won for the second time here, so we feel very fortunate,” said Sui, 20. “There were mistakes in the performance, which we regret, but overall we still put out a very strong skate. We want to thank the crowd for their support.”

Han shared that they did not have any “systematic training” coming into the event. Sui was recovering from a fall on a throw jump which affected her eye sight, especially in the left eye. She was also recovering from the flu.

“Once we got to Taipei, we adapted quickly to the weather and the atmosphere and we recovered,” said the 23-year-old. “However, I think that we only showed 50 percent of our level. We didn’t get the high levels a usual and we had problems with the side by side jump.”

“We hope we can prepare well for Boston,” Han added. “[Sui] will also have her eye checked out.”

Scimeca and Knierim came back from a somewhat shaky short program with the best free skate of their career so far. The U.S. silver medalists reeled off a level-four quad twist, side by side triple Salchow and triple toe-double toe, as well as a throw triple flip and Salchow in their clean program to music from Elizabeth: The Golden Age.

The team, who finished third at this event in 2014, scored 140.35 points, clearly surpassing their previous personal best of 127.87 points. Overall, they accumulated 207.96 points and moved up from third to second.

“To finally get that done feels great,” said Knierim, 28. “It’s been so long and this is such a great boost for us going into Worlds. We showed what we can achieve even today there were some little mistakes. We weren’t thinking about a score that high, even with a clean program. It’s just amazing!”

“I didn’t know if we could even score a 140 in our whole career!” added Scimeca. “I’m speechless. For once, I’m speechless!”

Scimeca, 24, added that she had personally been struggling coming into this event and had lost a lot of confidence after nationals.

“Doing this free skate was a real testament to our character, so I feel great going into Worlds,” she said.

Yu, 20, and Jin, 21, were not in top shape. In the short, Yu fell on the triple toe and they stood in fourth place. Their long program to “Humility and Love” was highlighted by a triple twist, throw triple Salchow and level-four lifts, but Yu fell on the throw triple loop. They did not try the throw quad Salchow.

With a free skate score of 122.34 points and a total score of 187.33, the two-time and current World Junior champions moved up from fourth to claim the bronze in their debut at the ISU Four Continents Championships.

“There were some mistakes and the jumps affected the flow,” Jin observed. “Also the speed was affected after the fall. We will go back and try our best to prepare for the World Championship. My partner was injured and then she got sick and we were behind in our preparation.”

USA’s Tarah Kayne and Daniel O’Shea pulled up from seventh to fourth place with a solid skate. Kayne only fell on the throw triple Lutz, but she has been sick as well with a viral infection. The U.S. Champions made it through practice and were able to do all the elements, and made the decision to compete the long program.

“I tried my best to get through the program and just believed in all the work we’ve put in so far this season,” said Kayne. “It wasn’t our best performance, but I think we stayed together through the whole thing.”

2015 World and Four Continents Champions Meagan Duhamel and Eric Radford of Canada, who were in second after the short program, had to withdraw before the Free Skate as Duhamel came down with a stomach flu.

“I thought my willpower could carry me through the long program, but when I realized it couldn’t even carry me through five minutes of our practice session this morning, I knew I had to set my ego aside and make the smart decision,” Duhamel posted on Facebook. “It’s the first time in our six-year career that Eric and I have had to withdraw from an event and it was extremely hard to do. We worked so hard to be prepared for this competition and show some major improvements over our previous competitions this season, but I guess that will have to wait until the World Championships. This season has not gone how we planned or worked for, but it will be ending on a high note in Boston. Watch out World.”