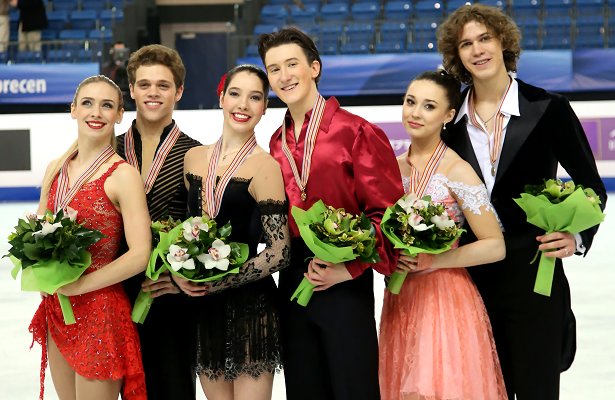 Lorraine McNamara and Quinn Carpenter led the U.S. ice dancers to a one-two finish at the 2016 ISU World Junior Figure Skating Championships in Debrecen, Hungary. Teammates Rachel Parsons and Michael Parsons slipped to second to take the silver, while Alla Loboda and Pavel Drozd of Russia came from sixth place after the short dance to earn the bronze medal. All three teams achieved a personal best score in the free dance.

Skating last, McNamara, 17, and Carpenter, 20, turned in an excellent performance to “Carmen” and got a level four for the straight line lift, the twizzles and the spin, while the step sequences and the rotational lift merited a level three. The ISU Junior Grand Prix (JGP) Final Champions scored 97.40 points and accumulated 163.65 points to add the gold medal to their silver from last year.

“For us, we’re obviously very happy to have won the gold,” said McNamara. “It wasn’t our main focus. We were focusing on skating the best that we possibly could and we are very happy that it got us where we are, but we’re very happy that we skated the program we did and accomplished what we set out to do.”

Parsons and Parsons surprisingly had edged out the top favorites McNamara and Carpenter in the short dance by just 1.53 points. The skaters, who train together with McNamara and Carpenter under Alexander Kiliakov and Elena Novak, put out a strong performance to the Tango pieces “La Mamalada” and “Palabras y Viento.”

They picked up a level four for their twizzles, lifts and the spin, but the midline step sequence was only a level two. The ISU Junior Grand Prix Final bronze medalists earned 94.86 points and totaled 162.74 points to take the silver, their first medal in their fourth appearance at Junior Worlds.

“Since the Final, we’ve been working in cleaning our transitions, dancing more, telling more of a story in our program, and just improving every little thing that we could leading up to Worlds,” said Michael, 20. “It is the last time we’re performing these skates this season, so our goal was just to do the best we possibly could and whatever happened, happened.”

“It means a lot to us to have a medal at Junior Worlds,” added Rachel. “We’ve been working really hard.”

Although this was Loboda (17) and Drozd’s (20) first outing at Junior Worlds, they still came in as medal contenders since they won silver at the JGP Final. However, when Loboda fell in the last seconds of their side by side footwork in the short dance, the Muscovites were ranked only sixth.

The Russian Junior champions came back strong in their free dance set to “Lo ti penso amore” and “Paganini 5” and collected a level four for their spin, twizzles and lifts, and a level three for the two step sequences. They received 92.26 points and had 151.19 points overall for a third place finish.

“We didn’t have such a good short dance and it was very important to show a good free program and I think we did it,” Drozd told the press. “Today we were like one team. We’re so excited and so proud to be on the podium, because this is a very serious and important event, the most important for us this season.”

Loboda and Drozd announced that they plan to compete in juniors next season, however, the two American teams are undecided as to whether they will move up to the senior ranks.

“Obviously the jump from junior to senior is the biggest jump that you can take in the sport and that decision takes a lot of thought,” McNamara explained. “It is a long process and a lot of people need to be used in the decision. So we’re going to take in all the factors possible before we make that decision.”

France’s Marie-Jade Lauriault and Romain Le Gac dropped from third to eighth as she missed a twizzle (144.26 points).