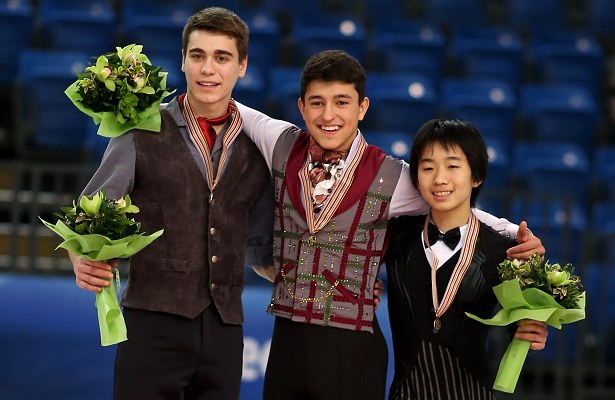 Daniel Samohin of Israel vaulted from ninth place to grab a historic gold, the first title for Israel at an ISU Figure Skating Championship. Canadian Nicolas Nadeau came from eighth to claim the silver and USA’s Tomoki Hiwatashi moved up from sixth to earn the bronze medal.

It wasn’t the prettiest night of skating at Junior Worlds in Debrecen, Hungary, on Friday, but it was surely exciting. Nearly none of the skaters remained in their respective place after the short. Many produced a new personal best in the free skate, including the top three skaters, while others plumented.

Samohin had stepped out of a triple flip in the short, a costly mistake, but rallied back in the long as if he had nothing to lose.

“I was asked if I should aim to fight for the gold medal and I said, ‘I’ll try my best,'” said the skater who just turned 18 last Saturday. “There’re a lot of great skaters here, so I couldn’t be sure that I’d be first.”

The 2015 U.S. Classic champion felt it was akin to a birthday present.

A year ago Nadeau finished far off the podium at 25th, failing to even qualify for the free skate. Not this time. The French-Canadian ranked eighth in the short after reducing his combo to a triple Lutz-double toe.

In the long, he landed two triple Axels, one in combination with a triple toe, as well as four more triples. Although he underrotated his quadruple toe loop, the 18-year-old scored 150.86 points and accumulated 224.76 points overall for a second place finish.

“I was coming in to do a top five,” said the skater from Quebec. “After the short program, I just wanted to do a good program for the long. If I’d done the same program [which resulted] in a lower position, I’d still be pretty happy about it and surprised that I did my best.”

No one saw Hiwatashi—a substitute for the injured Nathan Chen—coming; including himself. However, two clean programs with triple Axels did the job. The U.S. Junior Champion could have even had the silver medal if he hadn’t repeated a third triple jump in the free skate.

The Japanese-American from Illinois scored 147.55 points for a total of 222.52 points to edge out Russia’s Alexander Samarin for a surprising third place.

“I wasn’t expecting to get this position right now,” said Hiwatashi. “I was only aiming for the top eight or ten. I just wanted America to get three places for Junior Worlds.”

Samarin was second coming into the long program, but slipped to fourth as he made several errors (222.11 points).

“Right now I can’t really say what happened,” said the 17-year-old Muscovite. “I need some time to understand everything and to think through it.”

USA’s Vincent Zhou placed fifth although he was fourth in both segments (221.19 points).

Russia’s Dmitri Aliev, the leader after the short, fell to sixth after popping his planned quad into a double and making more errors on other jumps (211.18 points). As one of the favorites coming into competition, the 16-year-old was clearly disappointed.

Deniss Vasilijevs of Latvia struggled with his triple Axel and dropped from third to eighth (204.75 points).

“They called both my Axels underrotated and that cost me a lot of points,” said the 17-year-old. “This is quite upsetting.”