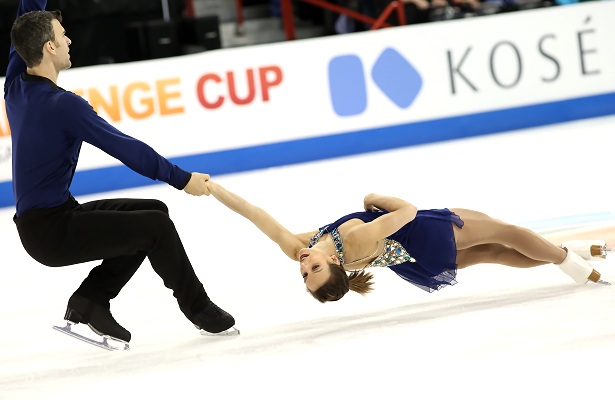 Canada’s Meagan Duhamel and Eric Radford perform a death spiral during their free skate at the 2016 KOSÉ Team Challenge Cup.

A winning performance from Canada’s Meagan Duhamel and Eric Radford helped Team North America launch into the lead after the pairs free skate and ice dance segments at the team competition of the 2016 KOSÉ Team Challenge Cup Saturday.

The scores earned during the head-to-head competition will not count toward ISU’s personal or season’s best.

The top score from each pair of the three continental teams counted toward the overall team score. The team competition will conclude tonight with the men and ladies free skate programs. The three teams are competing for $405,000 in prize money.

Duhamel and Radford, the current and two-time World champions, had skated a show version of their program to Adele’s “Hometown Glory” while in Japan for Stars on Ice as a way to train, but didn’t do a full version until this competition.

The lack of training showed with issues on their side-by-side triple Lutz, however, the Canadian champions managed to land their quad throw Salchow and the program was well received by the audience.

“Overall, we achieved what we wanted to do here,” Duhamel said.

At first, there was a bit of confusion in the score: The Canadians’ quad throw Salchow was initially called a triple due to a computer error. The matter was resolved and the pair received several more points.

Russia’s Ksenia Stolbova and Fedor Klimov scored 130.46 points in their program to Danny Elfman’s “Man and Shadow,” enough for Team Europe to earn second. The 2014 Olympic silver medalists struggled on their triple twist and their side-by-side jumps.

“Usually it’s much better,” Klimov said. “It’s the last skate of the season… in this condition, it was okay.”

Xuehan Wang and Lei Wang of China had the top score for Team Asia with 118.78 points. Their “My Fair Lady” program had a few errors, including doubling both their planned side-by-side jumps.

USA’s Alexa Scimeca and Chris Knierim scored 122.15 points for their skate. The audience roared after the 2016 Four Continents silver medalists completed their big triple twist in their routine to the soundtrack of Elizabeth: The Golden Age. The team also nailed both the throw triple Salchow and throw triple flip, but struggled on both of their side-by-side jumps.

Scimeca said today’s skate was more about “personal growth” and was upfront about the errors made on the side-by-side jumps.

Nicole Della Monica and Matteo Guarise of Italy also had problems on their side-by-side jumps during their program to Abel Korzeniowski’s “Cosmic Journey ” from the Romeo and Juliet soundtrack. The team scored 105.88 points.

Sumire Suto and Francis Boudreau Audet of Japan had a few jump mistakes in their routine to “Les parapluies de Cherbourg” by Michel Legrand. They scored 98.08 points.