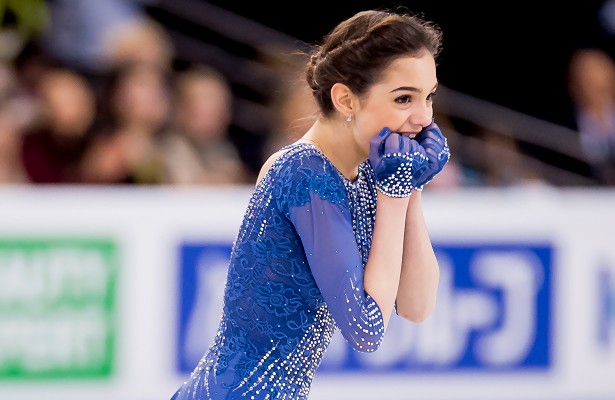 Evgenia Medvedeva of Russia rode the crest of her momentum this season to win the World Championship with a record-breaking score at the conclusion of the 2016 World Figure Skating Championships in the Ladies’ Free Skate. USA’s Ashley Wagner extinguished her country’s ten-year ladies medal drought by claiming the silver medal and Russia’s third entry, Anna Pogorilaya, surprised fans by snagging the bronze.

In her world championship debut, sixteen-year-old Medvedeva skated her intricate free skate to the soundtrack of W.E. She reeled off triple after triple effortlessly, including two triple-triple combinations: the triple Lutz-triple toe loop and the triple Salchow-triple toe loop. She also performed a triple Lutz and double Axel with her arm over her head. The European champion earned a record-breaking score of 150.10, surpassing Yu Na Kim’s (KOR) 2010 Olympic score by .04, for a total of 223.86.

“I was actually less nervous than usual and I felt very comfortable out there,” Medvedeva said. “I was focused and took one element at a time.”

The Grand Prix Final champion was particularly satisfied at landing the double Axel which abandoned her at the European Championships.

“You probably could see how I went in it, carefully,” recalled the 16-year-old. “It was like life or death, but when I landed it, I had a big smile on my face.”

“I am really happy because that’s the best performance of the year,” said coach Eteri Tutberidze of her skater’s showing in Boston.

Tutberidze is committed to developing Medvedeva’s staying power in her country rather than be eclipsed by a new sensational teenager, as has been the trend in Russian figure skating recently.

“We are just going to pray for it,” said Tutberidze. “So many girls. Strong skating in Russia for girls. We’ll just pray and practice.”

About her goals for Medvedeva next season: “Repeat,” Tutberidze said.

Taking the ice last in the final flight to enormous applause from the sold-out TD Garden, Wagner skated her dazzling “Moulin Rouge” program knowing that she needed her A game after a night of formidable skating. She brought it.

Fiery and determined, the three-time U.S. national champion opened with her triple flip-triple toe loop combination with ease, although it was later marked as under rotated. She roared across the ice ticking off the rest of her planned triple jumps; the only visible error being a step out on her triple flip. The judges awarded her with a personal best score of 142.23 for a total score of 215.39.

“I think going up against the Russian field, the Japanese field, Gracie… technically they are so strong,” said the 24-year-old. “So I know that I still need to keep on working on that side of my skating, but the components side, that’s the part of the skating that I truly love.”

“I feel that I am a performer first and then a technician,” continued Wagner, who earned the highest components scores in the competition. “So for me, I have always stressed the importance of putting on a show and making it entertaining for the audience and the judges. I think that definitely helps make me a well-rounded skater. I have a long way to go technically, but [that] was a great showing for what I have been working on.”

Pogorilaya skated her evocative “Scheherazade” program with exceptional musical highlights and impressive lines. She landed seven triples, including a triple Lutz-triple toe loop combination to open the program. The 17-year-old scored 139.71 in the free skate to finish with a total score of 213.69. Her delight at the end of the program given several disastrous showings this season, was obvious as she pumped her arms and held her head with her hands.

“I am truly boiling inside!” said the European bronze medalist. “This is an incredible moment and I am truly excited for this moment. This competition is over, the season is over and I finished on a high note. I’m incredibly happy!”

USA’s Gracie Gold struggled in the opening moments of her dynamic “Firebird” free skate, falling on the back end of her signature triple Lutz-triple toe loop combination. The two-time and current U.S. National Champion rallied to land three more triples, including one in combination with a double Axel, but then doubled the second planned triple Lutz out of a back spiral. She earned a score of 134.85 in the free skate for a total combined score of 211.29, placing her fourth in the competition.

“It was just one of those really, really tragic skates that you just feel like you couldn’t do anything right,” Gold said of her skate. “I feel just really sorry for Boston and for the United States that I kind of let them down when they needed me most and I’ll just have to take some time to step back and re-evaluate my goals and probably find something more realistic to achieve.”

“It’s appearing less and less likely that that’s in my cards,” said the 20-year-old about her world championship medal prospects, “but of course I’ll keep trying and training hard. I am in the top in the world. I still have hopes for 2018 and the 2018 podium.”

“It just definitely wasn’t my day, and with the way the rest of the world is progressing and getting so much better, I just feel like I’m not with them,” Gold continued. “However if I can strike it right like the short program or the nationals long program, I can end up on top, so I have potential but it just has to be at the right time.”

After a clean seven-triple skate to her delicate “Un Sospiro” routine, Japan’s Satoko Miyahara earned a score of 139.89 score; about 2.5 points less than her Four Continents Championship performance of equal calibre. With a total score of 210.61, she finished fifth.

“Until now, I had skated multiple clean programs in competition in a row, so I wanted to continue that and end this season on a strong note,” the two-time Japanese National champion said. “I was nervous on my first jump, but gradually I was able to skate the way I wanted.”

Russia’s Elena Radionova skated her dramatic “Titanic” routine with a new pale pink and seafoam green costume and plenty of grit. The Rostelecom Cup champion had some determined landings that held back her grade of execution scores and she ended up with a free skate score 138.11 and total score of 209.81 to place sixth.

“I had a few small bobbles, nothing too rough, so I am pleased that I was able to complete everything well during my performance,” she said.

Three-time world champion and fan favorite Mao Asada skated her lyrical “Madame Butterfly” free skate strongly to the human eye, however repeated under rotations – on the triple Axel, triple loop and triple toe – as well as a double Lutz instead of a triple, ultimately marred her scores. The 2010 Vancouver Olympic silver medalist finished with a free skate score of 134.43 and total score of 200.30 to finish seventh.

“After I came back, there were times when I wondered whether I should not have,” the 25-year-old said about her return to competition. “It can be difficult, but I only have a few years left to be able to do this and I want to give skating all that I have.”

“There are so many young skaters competing now and I felt that maybe my generation’s time was over,” continued the 2010 Olympic silver medalist, “but as I went on, I began to think that just skating for myself is another approach and one I became more comfortable with.”