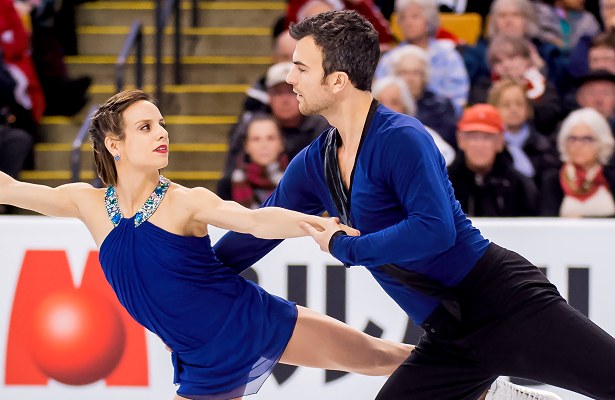 In the Pairs free skate, defending world champions Meagan Duhamel and Eric Radford roared to the top of the podium at the 2016 World Figure Skating Championships. China’s Wenjing Sui and Cong Han finished with the silver medal while the new team of Aljona Savchenko and Bruno Massot of Germany won the bronze.

The five-time Canadian champs skated their Adele’s “Hometown Glory” with intensity and passion. As they effortlessly performed element after element – an airy triple twist, side-by-side triple Lutz jumps, their signature throw quadruple Salchow – woven together by soulful choreography, the audience cheered progressively louder. They scored a personal best 153.81 to finish the competition with 241.99.

“We are happy and so proud that we came here and were able to deliver the two performances that we worked so hard for,” said Duhamel.

Duhamel was bubbling over with excitement before the program was even finished, emoting sheer joy.

It has been a season of self discovery for the team who grew accustomed to the pressure and expectation of being world champions. A meeting amongst the team following Canadian Nationals helped identify problems and set new goals.

“After Nationals, before we had our talk and sat down, Meagan said, ‘I just wonder if I still want to do this’ and I said ‘I was just thinking the same thing,'” said Radford about the toll of a string of competitions with subpar results; winning but not dazzling. “We are always on the same page somehow, even though we don’t talk directly about it.”

Compounding the confidence loss was the flurry of pairs buzz in the background: the return of the Russian Olympic gold and silver medalists, five-time world champion Savchenko’s reappearance in competition with her new partner, and Sui and Han’s surging scores.

“We let it be distracting,” Duhamel admitted. “I don’t think it needed to be.”

“As the season unfolds and you start to see your competitors for the first time, we made the mistake of starting to pit ourselves against them and trying to predict,” Radford added. “We were analyzing the pairs skating world too much and we finally let all that go and just concentrated on ourselves. We will try not to do that in the future.”

Short program leaders Sui and Han skated their enchanting “Samson and Delilah” with energy and commitment. Following a sensational quadruple twist and smooth side-by-side triple toe loops-double toe loops combinations, Sui fell on the throw quadruple Salchow and then doubled the side-by-side Salchow. The judges awarded them with a score of 143.62 for a total combined score of 224.47.

“I have many regrets with this competition,” Han said. “I think we probably thought too much before we went into the free skate and that led to many mistakes we made in the program. But through this competition, we have identified many opportune areas for us and we will definitely be training harder when we return to China.”

Savchenko and Massot performed their unusual free skate to “Sometimes” by Wax Tailor with the artful edge for which German teams are known. They opened with their signature massive triple twist and side-by-side triple toe loop-triple toe loop sequence. Though she doubled their side-by-side Salchows and two-footed the throw triple flip, the team ended their program with a confident throw triple Salchow. The judges awarded them with a score of 141.95 to finish the competition with 216.17.

“We are really happy to be here,” Massot said, regarding the delay in his release from the French Skating Federation to be able to compete with Savchenko for Germany. “To get a medal was not our objective. It was just to make two beautiful programs. I would like to say ‘Thank you’ to Aljona and ask her to continue with me. Without her I would not be here.”

“It’s a dream come true,” Savchenko said of her return to the world championship podium. “It’s amazing and all these emotions are coming out. I am really, really happy that I continued and I can enjoy what I love to do. Unbelievably happy.”

Russians Ksenia Stolbova and Fedor Klimov performed their modern interpretive “Man and Shadow” long program with intensity, severity and unique lift positions by Stolbova. The Grand Prix Final champions managed a triple twist and two sweeping throw triple jumps: the flip and Salchow. Their side-by-side jumps evaded them, however, when she two-footed the second triple toe loop and fell on the triple Salchow. The team earned 140.40 to finish the competition with a total score of 214.48.

“I am not happy because we are fourth and we are not on the podium,” said Klimov of his performance and placement. “Not a Russian on the podium so I am not happy. I don’t care if we are first of Russians or not, it’s just that for today we were not better. It is not a good result for Russian couples and for us too.”

Russians Evgenia Tarasova and Vladimir Morozov skated their Chopin free skate with elegance that parlayed into the execution of their technical elements, including a grand triple twist, side-by-side triple Salchows, triple toe loop-double toe loop-double toe loop combinations, a throw triple loop and a throw triple Salchow. Their only glaring error included lost unison on the side-by-side pairs spin and his hand touch on his triple Salchow. The team earned a score of 134.27 and a total combined score of 206.27.

Teammates Tatiana Volosozhar and Maxim Trankov skated their angst-filled “Dracula” number with great flair, but lacklustre elements. The Russian champions executed a messily-landed triple twist and he stepped out of the landing of his triple Salchow, managing only a single toe loop on the back end of the side-by-side combination. Their final high-risk element was the throw triple loop which Volosozhar landed with a three turn.

Despite the errors, glimpses of the team’s Olympic form appeared in their smooth side-by-side triple toe loops and throw triple flip. The performance earned them a score of 128.68 to finish the competition in sixth place with a score of 205.81.