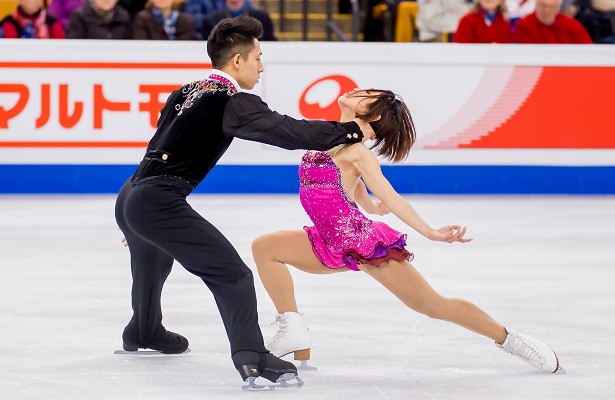 The much-anticipated Pairs short program with a bottleneck of world medal-contending teams did not disappoint at the 2016 World Figure Skating Championships yesterday. Leading the pack going into the long program is Wenjing Sui and Cong Han of China, followed by Canada’s Meagan Duhamel and Eric Radford and Russia’s Tatiana Volosozhar and Maxim Trankov.

Sui and Han combined sensuality and feistiness in their “Spanish Romance” routine to win the short program with a personal best score of 80.85. The Four Continents champions opened with side-by-side triple toe loops, a glorious throw triple flip and a tremendous triple twist with Sui’s arm above her head.

“We both feel very happy that we have done a perfect short program,” Han said. “This is what we can do in training and I am very happy, as well as honored, to have shown it to the audience here.”

Defending champions Duhamel and Radford skated passionately to “Your Song” by Elton John featuring a triple twist lift, side-by-side triple Lutzes and throw triple Lutz, although Duhamel fought to salvage the landing of the throw. The clean skate earned a personal best score of 78.18 and was especially gratifying given the short program struggles they have endured this season as they’ve settled into being world champions.

“I didn’t care if I was upside down on my triple Lutz, I was landing it,” she added about her pesky Lutz troubles this season. “That was the end of the story. I think we were really determined and focused.”

Coach Bruno Marcotte attributed the strong showing to a “heart to heart talk” following the Canadian Nationals where the team reset their goals: strive for personal best scores and not concern themselves with defending titles or the comeback of the Russian teams.

“Since Nationals, there’s been no talk of another team but themselves,” he said of the early season preoccupation with Volosozhar and Trankov. “If they focus on themselves and what they can do well and not trying to beat someone else, they can pull it off,” he said.

In their return to the world championships, the 2014 Olympic Champions Volosozhar and Trankov skated their animated and powerful “Bollywood” short program with panache. The couple landed the triple twist, side-by-side triple Salchows and throw triple flip, however, Tatiana landed it on two feet. The performance earned them a score of 77.13.

“This was not our best score,” said Trankov. “We did one big mistake on the throw. We are a little bit disappointed about this, but we saw the standing ovation of the audience and we thought it was more important to have this.”

In their world championship debut together, Aljona Savchenko and Bruno Massot of Germany skated their playful and charming Cirque du Soleil routine featuring a ginormous throw triple twist, throw triple flip and side-by-side triple toe loops. Positive grades of execution scores were compromised however when she two-footed the throw jump landing and when he pitched forward on the landing of his toe loop jump. They received a score of 74.22 and were fourth.

“It’s unbelievable to be able to tell what it feels inside,” said five-time world champion Savchenko of her return to the world championships. “I feel that the public is behind me and it’s a good feeling.”

Russians Ksenia Stolbova and Fedor Klimov made their competitive return since the Grand Prix Final where he injured his shoulder. However, they mustered palpable attitude in their performance of “I Put a Spell on You.” The 2014 Sochi Olympic silver medallists landed a comparatively small triple twist – a likely consequence of the injury – but followed up with a sweeping throw triple flip and commanding side-by-side triple toe loops. The judges awarded them with a score of 73.98 and they finished in fifth place.

Evgenia Tarasova and Vladimir Morozov of skated a toe-tapping “Riverdance” with a grand triple twist, side by side triple toe loops that were squeakers and a throw triple loop. The Russian team, alternates to Yuko Kavaguti and Alexander Smirnov (who withdrew due to injury), scored 72.00 and sit in sixth place.

Americans Alexa Scimeca and Chris Knierim skated their expressive “Nothing Else Matters” program with intensity and opened brilliantly with an airy triple twist, but he later fell during the team’s side-by-side triple Salchows. The team rebounded with a confident throw triple Lutz and finished seventh with a personal best score of 71.37.

Lubov Iliushechkina and Dylan Moscovitch of Canada were eighth (68.17). Vanessa James and Morgan Cirpres of France were ninth (66.69), closely followed by Kirsten Moore-Towers and Michael Marinaro of Canada (66.06).