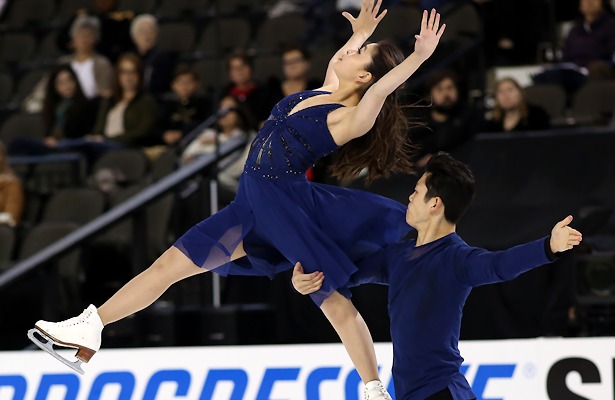 Still beaming from their 2016 US title, Four Continents title and World silver medal, the siblings Maia and Alex Shibutani rode the crest of their success to claim their first Skate America championship.

Debuting their subdued free dance titled “Evolution” arranged by Alex, the team skated heartfully across the ice, scooping up five level four elements on the journey including their side-by-side twizzles at a musical highlight in the routine. The duo scored 112.71 in the free dance for a total competition score of 185.75.

“Both programs this season are different because Alex and I are different,” explained 22-year-old Maia. “That’s why we decided to call our free dance ‘Evolution.’ We feel like we’ve learned so much over the course of all our experiences and competing last season. It kind of culminated in this huge break-through for us at the world championships. Marina (Zoueva) has always had an amazing vision for us, but as the years have gone on, we have a vision for ourselves and we know who we are as a team. We think that is really showing on the ice now.”

The team also explained their strategy for skipping the pre-season competition circuit and protecting their training time.

“I definitely think that we’re building momentum off from last season,” Maia offered. “Right after the world championships, we got to work right away on our programs. The reason why we decided to have this competition be our debut is because we wanted to spend enough time creating. We’re really happy with where we are at right now.”

Teammates Maddison Hubbell and Zachary Donohue skated to “I Want to Dance with Somebody,” showcasing a soulful intensity to win the silver medal. Simply costumed, the 2016 US National bronze medalists highlighted the program with romantic lifts and musically-timed twizzles. They scored 106.99 in the free dance for a total of 175.77.

“I think we’re trying to show there are different kinds of love,” said Donohue, 25, of the skate’s theme. “Obviously, there is romantic love which everyone in figure skating goes through in a way, but there is a lot more to love than just what you give to someone else. There is a lot of love surrounding yourself. We have a lot of movements in this program that are kind of about enjoying ourselves and our own space, so I think it’s a global kind of thought.”

“The end of our program I think as we develop it more and more, is going to become kind of like this storm of freedom and storm of excitement and take all the burdens off our shoulders,” said Hubbell about the slow build of the dance. “So, it’s got a long way to go, but we’re really excited with the base.”

Russians Ekaterina Bobrova, 26, and Dmitri Soloviev, 27, skated their moving free dance to Four Seasons which featured five level four elements. Although they received a one-point deduction for an extended lift, the five-time national champions scored 105.85 for a competition total of 174.77 and slipped to third overall.

“Not everything went the way we wanted it to, but now this gives us time to improve and to correct,” said Soloviev of the two level two diagonal step sequence. “Next time we will do much better.”
Italians Charlene Guignard and Marco Fabbri skated an enchanting routine to “Pas de Deux” from the Nutcracker that featured five level four elements. Their freedance earned them 100.65 points, and they moved up one spot to fifth place overall with a total competition score of 165.44.

The Shibutanis quickly set the tone of this championship with a fresh short dance that exuded panache and style. Skating to a mash up of “That’s Life” by Frank Sinatra in its original and remixed forms, the team scored 73.04, receiving only a level 2 for the non-touching midline step sequence and partial step sequence.

“We are just being loose and having a good time,” Alex, 25, said. “There are so many Easter eggs layered in the choreography and the music of this program. I am excited to go throughout the season and have people discover them for themselves. We will work hard to make sure that they’re visible.”

The music choice is personal to the team. “It’s a shout to the experience of getting to this point,” Alex explained. “We’re skating to ‘That’s Life.’ You have your highs and your lows. You brush the haters off and keep going and doing it your way and I think we’re doing that.”

Bobrova and Soloviev oozed across the ice in their blues and swing short dance, earning a level 4 on their twizzles that also garnered high Grades of Execution (GOE). However, they only earned a level 2 on their partial and diagonal steps. They placed second with 68.92 points.

“This is not our first performance this season and we are unfortunately not happy,” said Soloviev. “We will have to investigate why the level is so low. In some places we do agree, but in some places we were surprised and we need to figure out what’s going on.”

Hubbell and Donohue performed their dynamic hip-hop mash up with energy and spunk, meeting all the key points in the Midnight Blues pattern, but were mainly disappointed with a level two footwork sequence. The 2016 US Classic champions earned a score of 68.78 from the judges for third place.

“The short dance is all about performance,” said 25-year-old Hubbell. “I think that it’s going to be something that’s growing every competition. We made a program that’s challenging physically. We wanted to dance hip-hop for as much of it as we could, so we get the blues done in the beginning. We have a little more of a fast-paced dance program in comparison to some of our competition that take it at a slower pace. We think the potential for the end of the season is really there, but here at the beginning of the season, it’s really tough to have all of the energy and the stamina at the end of the program to get that level three or level four footwork.”