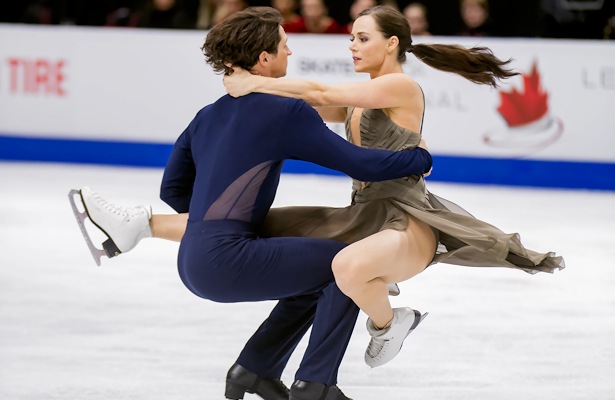 “We always say that we’re perfectionists, but for Tessa and I, it’s all about the moment, creating the moment,” said Moir. “Coming back here, we realize how special it is to have moments like this in our home country and with such great fans, and we want to capitalize on that. It just wasn’t quite the feeling we were looking for, but we’re still happy with the skate.”

There’s plenty to be happy about. Their mesmerizing free dance to “Pilgrims on a Long Journey” and “Latch” pulled three level four elements, including their poignant stationary and rotational lifts. The free dance earned them 111.83 points for a total competition score of 189.06. The most visible error was a misbalanced twizzle by Virtue.

“Just tried to hold onto it, really,” she said of the wobbly trick. “Probably my shoulders got a bit ahead of the rotation.”

Americans Madison Chock and Evan Bates rose to the pressure skating to “Under Pressure” to best the Canadians in the free dance with a score of 112.03, but settled for silver with a total score of 188.24.

“I think the program is ambitious. It’s different,” Bates said about their Queen and David Bowie routine. “I think the choreography is different for us especially. We’re more used to doing more romantic pieces and this is edgier and more current with the music selection and the choreography. We wanted to push our boundaries and to experiment in the pre-Olympic year. I think what it’s done for us is help us to find our niche and find who we are on the ice and what we’re trying to say exactly. And I think this year, more than ever, we are being true to who we are.”

The 2016 world bronze medalists are motivated by the results in Mississauga.

“Today, especially, we were very focused on the execution of elements, and I think some of the transitions and some of the overall skating can be stronger,” said Bates. “But for tonight, we are really happy with the performance and the overall experience here at Skate Canada.”

“We both think we can keep growing this program,” Chock added. “It has a lot more potential.”

The exuberant bronze medalists were Canadians Piper Gilles and Paul Poirier. Their smooth-as-silk Argentine tango unspooled with five level four elements and a chemistry between them that they have not been projected before. They scored a personal best 110.45 in the free dance to finish with a total of 182.57.

“The Argentine tango is so intimate between two people; we almost want the crowd to feel uncomfortable with the movement that we’re doing because there is so much passion and intensity between the two of us,” said Gilles. “So, we want to make sure that those details come across so that the audience feels that. And I think we’ve done a really good job.”

“I was playing a lot of mental games with myself throughout that whole program,” admits Poirier, who is still finding comfort among the world’s top ice dance teams. “That was a really hard program mentally, but we’re so well trained we could stay focused and take the program step by step. We felt really comfortable. That’s exactly the kind of program we want to be skating in competition.”

Their determination is multiplying with their recent success and evident by their approach to their next grand prix appearance at Trophee de France and hopes to return to the Grand Prix Final.

“For us, the goal at this point needs to be to win,” said Poirier of their hungry mentality. “Gaby [Papadakis] and Guillame [Cizeron] are an amazing team and we weren’t that close to them last season, but I think if we want to be competitive, if we want to be shooting for the podium, that has to be the goal in every competition we enter.”

In their return to Skate Canada and the grand prix series, Virtue and Moir danced back to the top of the standings with their vivacious Prince-themed routine that garnered 77.23 points. Full of attitude and funk, the routine garnered two level four elements with component scores to envy.

“We feel more pressure and we want that pressure,” said Moir of the return. “The big goal was to come here and skate well. The feeling was right where we wanted it to be. We were really together. That was a truly special moment. Technically we could have been a little bit stronger.”

“We are thrilled to be among the mix,” said Virtue of the world-calibre competition in Mississauga.

“We are stepping back into a field that doesn’t really have room for us,” added Moir. “It will be interesting to see where we slot in.”

Known as a technical taskmaster, coach Patrice Lauzon was focused on the numbers.

“We will work on technique,” he surmised about the training focus following Skate Canada in preparation for the team’s next grand prix event in Japan. “I am not happy with the levels they got but that’s me and that’s my job in the school. They need to take better levels. They are small details and they have to be very precise.”

Chock and Bates had fun and got funky in their hip hop short dance to “Bad to the Bone” and “Uptown Funk.” The team came second to the Canadians with a score of 76.21. They achieved four level four elements with the energetic program.

Working with Rohene Ward on choreography, the team is now uncovering their groovy side after last year’s lyrical short and free dances. Among the many highlights is a swoop move directly into the twizzle sequence that the team calls the “whoop.”

“It was pretty tricky at first,” said Chock of the move. “It took more than a few tries to nail this one.”

“When the crowd gets into it and we start to get excited, I think that is the challenge to stay consistent and knowing the elements,” said Bates, reflecting on the program’s development thus far in the season.

Styling across the ice to “Disco Inferno,” Gilles and Poirier swooned and sassed to third place with a score of 72.12. Distinctively costumed in bell bottoms and a high ponytail, the innovative team is thrilled with their new groove.

“It was such a short-lived style of dance,” Poirier said of the era’s tunes. “Because of that, it allowed us to make this our little timebox where you open it up and you can just reminisce.”
Building on the momentum of their top five short dance finish at the world championships and pre-season results, the team is adjusting to their new success.

“We got a little bit excited and there was pressure on us based off our strong finish at Nebelhorn,” Poirier explained, “but those little things don’t distract us and we got our job done. Early in our career, that would have derailed us.”

Capellini and Lanotte were disappointed with their fourth-place finish and score of 71.08 for their animated Frankie Valli short dance.

“We don’t quite understand the marks,” Lanotte said of the level one midline step sequence. “I don’t know what to think. This is the first time in my career, and it’s been a long career, that I didn’t understand what happened there. We skated good. Everything was in place.”

Despite the problem, they skated their program with panache. Dressed in polka dots and a crimson red blazer, the team’s impressive straight line lift included Lanotte in a lunge position.

“I fell in love with it,” said Lanotte of the 60’s routine. “With the story. With the music. Really, really. We love these sorts of rhythms, so we thought ‘lets do this.'”

“We felt like we didn’t have enough time to really make a good program,” he added about the choice not to perform hip hop like many of his competitors.