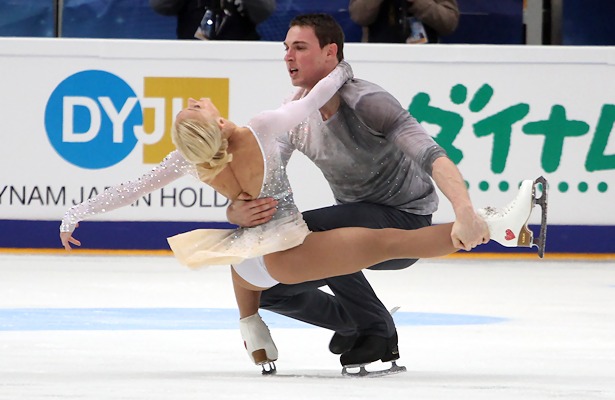 Aljona Savchenko and Bruno Massot of Germany celebrated victory in their debut as a team on the ISU Grand Prix of Figure Skating at 2016 Rostelecom Cup. Natalia Zabiiako/Alexander Enbert and Kristina Astakhova/Alexei Rogonov saved the honor of the Russian pairs and took silver and bronze.

Zabiiako and Enbert led in the short program by just 0.26 points after Savchenko and Massot both fell on their triple Salchow. The lift went wrong too, as Savchenko’s skirt of her new dress got in the way and she could not hit any positions, so the element received just a base value.

“I don’t know what happened, we never fell on the jump,” Savchenko said.

Their romantic long program to “Lighthouse” looked much smoother. The team landed their solo triple toe and Salchow jumps, completed excellent lifts, and their trademark huge triple twist. However, the throws were a problem today. Savchenko popped the throw Axel into a double.

“I got in a tracing on the take off and I had lean in the air, so I had to open it,” she explained of the throw Axel.

Then she crashed on the throw quad Salchow, the very last and newly-included element into the program. The five-time world champion and her partner of two and a half years earned 207.89 points.

“We worked on the throw quad the last two weeks, and after one week, I had problems landing the triple. It is better to do the quad. We’ll get more points for it even I fall than for a two-footed triple,” Savchenko reasoned.

“I am overall really happy with this competition here, except for the fall in the short,” Massot added. He explained that the couple will go straight to Paris on Monday for their second Grand Prix next week.

Zabiiako and Enbert overall were a nice surprise. Their short was clean, and in the long, they missed the side by side Salchow, but made no further major errors. They earned 197.77 points.

“We know we can do the Salchow and I think we’ll be calmer for it in our next competition,” said Enbert. “We are pleased with our other elements. We need to analyze some levels and correct our mistakes for Paris.”

Astakhova and Rogonov struggled with the side by side triple loop and Salchow (she doubled), but their throws were good and they moved up to third to take the bronze at 188.74 points.

“The mistakes on the jumps we do in practice are regrettable, but I think we’ll come to Russian nationals well prepared,” Rogonov said.

Valentina Marchei and Ondrej Hotarek of Italy were third after a solid short, but she fell on the exit of the triple twist and on the triple toe in the free and the Italians dropped to fourth.

Canadians Julianne Seguin and Charlie Bilodeau were far behind in the short when they missed their loop – both fell and she had doubled it on top of it. The long went better, but they remained in fifth place.