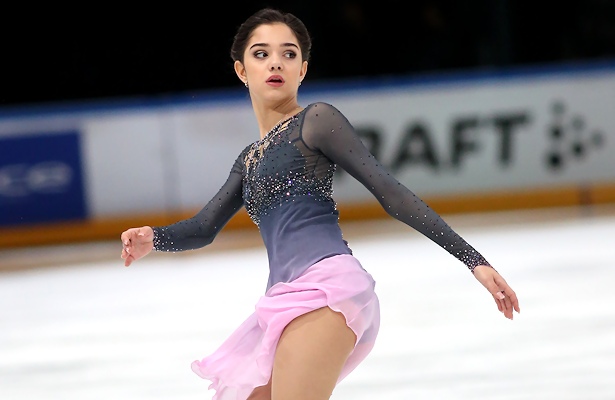 Evgenia Medvedeva of Russia once more reigned supreme and won the Ladies competition at 2016 Trophee de France with 21 points to spare. Two new-comers joined her on the podium in their debut at the senior Grand Prix series: teammate Maria Sotskova, who took the silver medal, and Japan’s Wakaba Higuchi, who captured the bronze.

Medvedeva was off to a good start in the short program, once again showing off her amazing consistency and nailing all her elements effortlessly – the triple flip-triple toe, triple loop, double Axel. The World and European champion improved her personal best at 78.52 points and it probably won’t be long before she will break Japanese Mao Asada’s record score of 78.66 points, set at the 2014 World Championships. Medvedeva already holds the record score for the free skating with 150.10 points, achieved at the 2016 ISU World Championships.

Although the Russian skater was flawless in her practices, she is not a robot and took an unexpected fall in the free skating on the triple Lutz. Her other six triples were clean and the spins and footwork excellent as always. The performance to music from Extremely Loud and Incredibly Close, dedicated to the victims of terrorism, was strong overall.

Medvedeva is a little actress on the ice, and considering that exactly one year ago on November 13, terrorists had attacked Paris, this program and its theme were very up-to-date. The Muscovite, who will turn 17 next week, was “absolutely not satisfied” with her performance.

“I was too slow, not only on Lutz, where the lack of speed was the reason for the error, but in general,” she said. “I will go back and work on it for the Grand Prix Final. Mistakes push you further and make you work harder. I also need to improve my component score.”

Sotskova was solid in her short, as well as the long program to “Adagio” by Alfred Schnittke, where she portrays a butterfly. She landed six clean triples and only underrotated a triple Lutz. However, the World Junior silver medalist looked cautious and was very focused on the jumps.

“My butterfly was not free today,” the 16-year-old admitted. “I was terribly nervous, even more so than before the short program. I really need to think about how to deal with my nerves.”

Higuchi, a dynamic 15-year-old from Tokyo, Japan, sat in fifth after short as she had doubled her flip. In her long to Scheherazade, the two-time World Junior bronze medalist completed a triple Lutz-triple toe combination, as well as three more clean triples, but popped a Lutz. The skater won her first Grand Prix medal with 194.48 points.

“This is my first senior Grand Prix and I was aiming for the podium,” said the teen from Tokyo. “I am happy that I achieved that. In the short program, I popped my flip, but I was happy that I did the triple Lutz-triple toe and I was pleased with my score. I popped one jump again, but overall the performance was good and I’m happy with my medal. I try to skate with more expression, move my arms and have bigger movements,”

Canadian Gabrielle Daleman shone in the short, cracked the 70 points for the first time, and skated clean. Unfortunately, she could not hold it together in the long. A hard fall on her opening triple toe (planned in combination with another triple toe) threw her off and she made errors on other jumps to drop from second to fourth at 192.10 points.

So Youn Park of Korea turned in two solid performances, she only missed a triple Lutz in the free, to place fifth.

Frenchwoman Laurine Lecavelier looked strong in the short with a clean program, but struggled with some elements in the free and came sixth.

Three-time World Champion Mao Asada of Japan and UA’s Gracie Gold were not in shape. Gold popped two jumps in the short and fell twice in the long to finish eighth. Asada, who suffered from knee pain and was not able to practice much, doubled four jumps in her free skating and was ranked ninth.