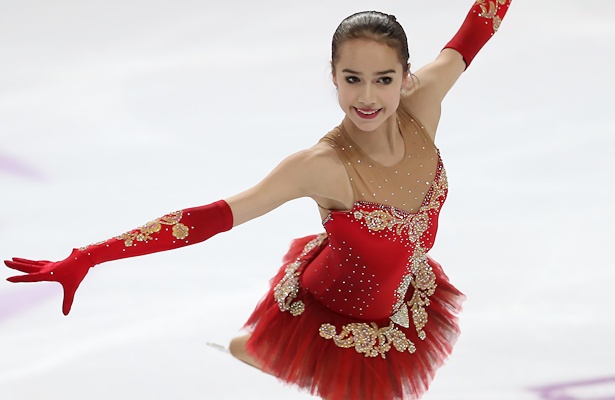 In the second event of the 2016-17 Junior Grand Prix Final, Russia’s Alina Zagitova won the gold with 207.43 points, 13 points above her teammate Anastasiia Gubanova (194.07), who, in turn, earned 17 points more than the bronze medalist, Japan’s Kaori Sakamoto.

Zagitova, who trains in Moscow under Eteri Tutberidze and Sergei Dudakov, was only ninth at last year’s Russian junior nationals, but after getting a chance to compete at the Junior Grand Prix Series, the native of Izhevsk seized the opportunity: she won the opening event in France, struggled a bit at her second outing in Slovenia and was nearly perfect on both nights in Marseille, despite arriving to the city one day later than the rest of the team.

“I forgot my permit (to travel as a minor),” she said. “I didn’t let this bother me. Maybe it was even better [as] I had less time to get nervous. I trained well for this; it is my biggest competition so far, so of course I prepared well for it.”

Skating to Rimsky-Korsakov’s “Scheherazade” in the short, the St. Gervais champion nailed all required elements, including level four spins and steps and a triple lutz-triple toe loop combination in the second half of the routine.

Her only mistake in the long, set to Don Quixote, was on a triple lutz-triple loop combination in which the second jump was called underrotated by the technical panel. The remaining five triple jumps were clean.

The debutant was understandably overcome after her victory.

“I did some small mistakes,” she told the press. “I was a little nervous, but overall, I dealt with my job and I’m very happy about that. I am overwhelmed with emotions and I can’t even describe them now. I tried not to listen to Anastasiia’s (Gubanova) scores or anything else. I just listened to my coaches. They set me up well. They encouraged me and said, ‘You can do this. You do it in practice and you will do it now.’”

In contrast to Zagitova, who was relatively unknown on the Russian skating scene, Gubanova has long been hailed as one of the great up and coming skaters. At only 14 years of age, she already had an impressive resume, including a number of victories at international novice events, and has experienced several setbacks, including a disappointing 12th place finish at least season’s junior nationals.

The student of Angelina Turenko had to overcome a setback in Marseille as well. In her balletic short program to The Swan, she fell on triple Lutz in what was supposed to be a triple-triple combination.

“I wasn’t nervous at all, quite the opposite,” said Gubanova, “but I lost concentration for a moment and made a technical mistake.”

She learned from the experience, though, and was flawless in the long set to Romeo and Juliet by Abel Korzeniowski, nailing seven triple jumps including a triple Lutz – triple toe loop combination. Beyond the impressive technical content, the program stood out thanks to the quality of her basic skating skills and presentation. The skater from St. Petersburg says that it’s one of her favorite programs to date.

“My music is from Romeo and Juliet and I am Juliet,” she explained. “I think I can show her character very well because it comes naturally to me and I do not need to pretend. That is why it is one of my favorite programs. I feel very comfortable skating it. I feel music and I enjoy my programs. I have read Shakespeare and watched the film and I cried when I watched it because it touched me so much.”

Gubanova credited the audience’s support and her mother for her excellent performance: “It is unbelievable to be here for my first time, and amazing how the audience supported me. When I heard them, any nerves I had disappeared and I got strength from them. I was very concentrated and I was sure I could do it. I had no doubts whatsoever. I think I get that from my mother. She is very sure of herself. She sets goals and she achieves them.”

Japan’s Kaori Sakatomo, the only skater with more than one season at the Junior Grand Prix circuit under her belt, was off to an excellent start when she became the only skater except Zagitova to nail all the elements in her touching short program to the soundtrack from The Artist.

Unfortunately, her long program performance was not quite as strong. The 2017 Japanese junior champion fell on her triple flip attempts, had a shaky landing to triple loop, and her triple Lutz was off the wrong edge according to the technical panel.

“I was nervous since this morning and I didn’t feel grounded,” explained the student of Sonoko Nakano and Mitsuko Graham. “Even with the jumps that I landed, I couldn’t really feel my feet. I did quite well at nationals, but international competition is a different game. I still need to improve my technique. I feel it was not good enough for here.”

Teammate and debutant Rika Kiihara attempted to land a triple Axel, a jump she has been working on since she was 12, in her long program, but she fell on the jump, which was downgraded to a double due to major underrotation. The 14-year-old was able to pull herself together after the initial mistake, but combined with the fall on the first jump of the planned triple-triple combination, it was enough to keep her off the podium (175.16).

“I was very nervous before entering the triple Axel and so I couldn’t tighten my core,” she explained. “Even after I finished the program, my legs were shaking. I wanted to give it my all and skate like I didn’t care that it was the Junior Grand Prix Final, but it was just impossible to do it. Before the triple Lutz-triple toe, I was able to recompose myself a little.”

Elizaveta Nugumanova of Russia finished fifth with 170.08 points. The student of Alexei Mishin made mistakes in both programs, falling on an underrotated triple Lutz in the short and underroated the triple Lutz and downgraded triple flip in the free.

“I don’t know what happened, I wasn’t even nervous, everything was fine in training and I have never had the kind of catastrophe I had today,” said the 14-year-old after the long program, which featured five clean triple jumps, including a triple loop-triple loop combination. “For this to happen at the Grand Prix Final is embarrassing. I was very confident, I am always confident, but it didn’t work today. In eight competitions this is the first time I have had this kind of failure. I can’t explain it.”

The three Russian skaters are now heading to the senior national championships, even though at 14 they are not eligible to compete on the senior level internationally.

2016 World Junior champion Marin Honda of Japan withdrew from the competition due to illness.