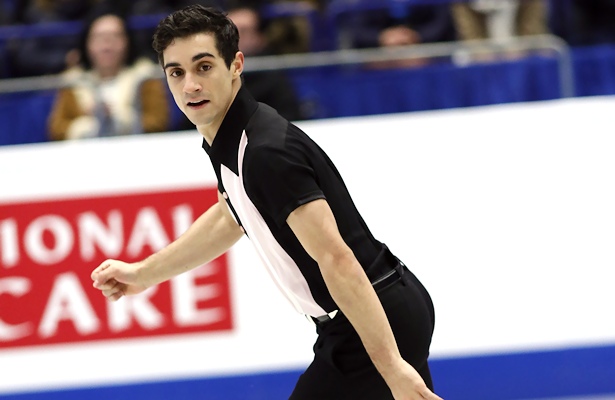 Spain’s Javier Fernandez extended his reign and took his fifth European figure skating crown Saturday in Ostrava at the 2017 ISU European Figure Skating Championships. The silver and bronze medals went to Russia’s Maxim Kovtun and Mikhail Kolyada. This season, it still seems that there is no one who can really challenge Fernandez in Europe, who became the first skater since Slovak Ondrej Nepela to win five consecutive European titles (1969-1974).

Fernandez already had a 10-point lead going into the free skate. He scored a season’s best of 104.25 points with a quad-triple toe combination that he had to save, a quad Salchow and triple Axel. In his entertaining Elvis Presley free, the two-time World champion started strongly with a quad toe and quad Salchow-double toe, but later took a hard fall on the second quad Salchow. After that, a few jumps were shaky. Nevertheless, the 25-year-old clearly won the free skate by over an 18-point margin to win the title with a total of 294.84 points.

“Yesterday, I said I want to do a personal best,” Fernandez told the press. “I didn’t do that, but I still fought from the beginning to the end, even after the fall. I tried to keep my mind and brain in the same place, but of course it is hard right after you fall and you hurt yourself. Overall, it still was a good performance. I’m saving it for Worlds, I guess.”

The fall did not only look painful, it was.

“I thought I was going to land the jump, but my skate stopped in the ice,” Fernandez explained. “My body was twisted. Half of my body went one way, the other half the other way. I hurt this (right) side of my hip and my rib. It is skating, sometimes you hurt yourself, and sometimes you don’t. It was one of my worst falls in competition I ever had, but I am still in one piece.”

For Kovtun, the fact that he was able to deliver two solid performances was a breakthrough – not the silver medal. The short was clean with a quad Salchow-triple toe and quad toe. In the free to “Iron Sky,” he landed the two quads again, plus two triple Axels. He only doubled a Lutz and didn’t do the planned combination with it. The three-time Russian champion achieved a new personal best and collected 266.80 points.

“I am really happy for today, because I feel I broke the barrier between the two programs,” said Kovtun. “Many times before, I did one program good and the second one was so bad and I didn’t know why. But we worked on the ice and I also started to work with a mental coach, and something inside now, I think, improved.”

The 21-year-old is also happy with the levels he received in both programs. All elements were level 4 except the step sequence (level 3).

“The difference between nationals and now is that we started to make some changes just before nationals,” Kovtun explained. “The changes are paying off already. I am glad that I fulfilled the task my coach gave me. It is just a shame that I didn’t do the Lutz. I will work on consistency for the next competitions and the future.”

After winning the Russian national title with strong performances, Kolyada came as a medal contender to Ostrava. However, the 21-year-old popped the Axel in the short and sat in fourth (250.18). He pulled up to third to win his first ISU Championship medal, although he singled one Axel again and fell on his quad Lutz. However, other jumps including a triple Axel-triple toe and the spins were of very good quality and it was enough to get on to the podium.

Kolyada, however, at first was not satisfied.

“My practice went well, the warm up was good, too,” he said. “I’m not upset about the fall of the quad Lutz, because it is still a very new jump for me. In practice it is 50/50 and it is hard to do it in the program. I’m upset about the Axel. I should have rotated it at least. I would have been happier if I was fourth, but had skated well.”

Jorik Hendrickx of Belgium ranked fourth, his best result at Europeans so far. The Belgian champion turned in two solid performances with only a few wobbles, but he did not go for a quad.

“This is my maximum of what I can show now as I am not doing a quad yet in competition,” the 24-year-old pointed out. “I am working really hard on quad toe and Sal(chow), but it is not there yet. It is still very risky to put it into competition context. I am really happy that I could demonstrate good skating in both short and free programs.”

Last year’s silver medalist Alexei Bychenko sat in third after a good short with a quad toe, but a tumble on that jump and a crash on the triple Axel let him drop to fifth overall (152.56).

“It was really tough to skate last,” confessed the Ukrainian-born Israeli skater. “I felt good at first in the program, but the mistake on the second quad toe threw me off and the fall on the triple Axel really affected everything else. I know what I need to work on and what I have to improve.”

“It was still an experience,” added the 28-year-old. “The audience was great. One of my first international competitions was a Junior Grand Prix here in Ostrava, maybe in 2003, and it was nice to come back here.”

Newcomer Morisi Kvitelashvili placed sixth. The Russian-born skater collected points with his quads, toe and Salchow, in both programs, but some jumps were also shaky.

“It was a very good event, there were some mistakes though – on the jumps, especially on the landings,” noted the 21-year-old. “I would like to show more consistent skating at competitions, in both short and free program.”

The son of Georgian emigrants switched his allegiance from Russia to Georgia in December 2015.

“Now I have the opportunity to compete more, and do not feel pressure to be selected,” Kvitalashvili explained. “It was hard emotionally to handle the internal competition on the Russian team.”

Deniss Vasiljevs of Latvia came seventh. Although he had a strong short and the only mistake in the free was a singled Axel, he was not happy.

“I was so stressed after I made the first mistake in the first jump,” explained the 17-year-old. “Suddenly, my head was blocked. I started to be afraid of the rest of my program and I had to decide how to continue with it. In the end, I decided to go for clean skating, but I must say, it was a poor performance. I was tight. Normally I skate with freedom and emotions, but today I went like a machine. And machines do not have feelings. I know I could do better and could have shown people real creativity which is inside of me.”