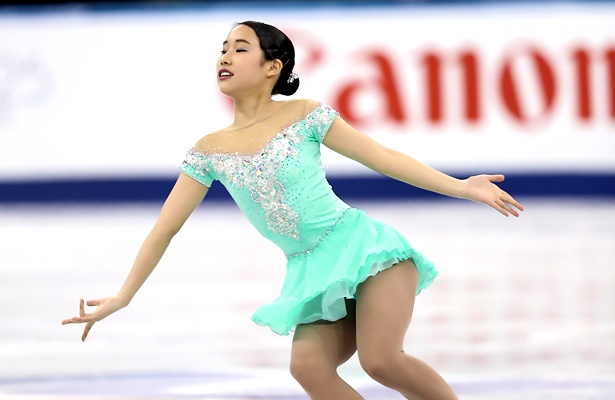 A year ago, Japan’s Mai Mihara didn’t even know if she was ever going to compete again, and now she topped the Ladies podium at the 2017 ISU Four Continents Figure Skating Championships in Gangneung, Korea. Gabrielle Daleman of Canada earned the silver medal and USA’s Mirai Nagasu took bronze. All three ladies produced personal best scores in the free skating.

Mihara was an up and coming junior skater last season who made it to the Junior Final in December 2015. However, following this event, she was diagnosed with arthritis.

“A year ago, at this time I couldn’t even stand up and walk, and to be able to compete at the Four Continents and to be selected for the World team is something just incredible,” the 16-year-old said following her clean short program that put her into fourth place.

She overcame the painful illness and came back stronger than ever, giving solid performances throughout the season. The “Cinderella” free was no exception. Once more, the petite Japanese put out a flawless program with seven triples to score 134.34 points and 200.85 points overall. And so, her fairy tale story became true: Like “Cinderella,” she rose from the ashes to triumph.

“I find it hard to believe that I won,” said Mihara. “It’s great that I finally became the Cinderella on the ice. My goal here was to skate clean both in the short and free and finish my programs with a smile. I’m glad I was able to achieve that.”

“I didn’t pick the music myself, but when I decided to return to the ice, I wanted something with a happy ending and I told my coach that,” she explained. “The reason I was able to come back so strong from the illness is the support from many people that were surrounding me, and also due to my will of wanting to be on the ice and skate again. I could not have done it alone. I want to thank all the people who helped me to get here.”

Daleman won the short program. The Canadian has had good short programs in the past, however, then struggled in the free. This time she held it together, although she singled a loop and almost fell on a double Axel. With 196.91 points, she held on to the podium and finished second, her first medal in an ISU Championship.

“It was a new experience leading after the short at such a big championship like Four Continents,” said Daleman, 19. “I’ve never done it before. It was a great learning experience. I said to my coaches that I was very nervous and they just said ‘use those nerves and do what you do every day in training, keep the rhythm of the program and just let your body take over.’ And that’s exactly what I did today. I’m very proud of what I did. Yes, there were a few mistakes, but I put those behind me and kept the program going. So, I’m ready to go home and fix those (mistakes).”

Nagasu has had many ups and downs in her career as well. This year again, she narrowly missed to qualifying for the World team and got Four Continents as a “consolation prize” when Ashley Wagner withdrew. Like last year, the 23-year-old made the best out of it. A botched triple loop left Nagasu in fifth place after the short, but then she rallied back in the free, landing seven clean triples. Her score of 194.95 points lifted her onto the podium.

“I love this music,” the former U.S. champion said about her free to ‘The Winner Takes It All.’ “This piece of music, really, I feel defines me. It’s hard as athletes to put ourselves out into the arena and not always get what we want and not always put out the performance that we want. I think when the skater is in love with the music, it translates to the judges and to the audience. Instead of being too technical, it allows me to really enjoy my skating. For that, I am so grateful to David (Wilson, choreographer) for giving me this piece of music.”

Following her good showing at the Grand Prix, Kaetlyn Osmond was considered the favorite for this event. The Canadian champion ranked second in the short despite a fall on the double Axel. She started well into the free with a triple flip-triple toe and a double Axel-triple toe, but after she crashed badly on a triple Lutz, the program went downhill. Osmond had two more big falls and popped an Axel to drop to fourth.

“The beginning of my program went super well and I’m glad that I was still able to go out there and do the beginning of my program really well,” said the 21-year-old. “I’ve been getting a lot better when I miss an element, being able to refocus and get back my feet underneath me. Today that just didn’t happen, but it’s a learning experience and something I’d like to work on going into Worlds, come up with new techniques for it. The next four weeks are just going to be a lot of training, a lot of run-throughs and just picking through every possible thing that I can to make everything perfect and maybe a couple of more trips to my sports psychologist.”

Dabin Choi of South Korea came out with two solid performances in front of her home crowd to finish fifth. She stumbled on her opening triple Lutz, but did not let that affect her too much.

USA’s Mariah Bell made several errors on her jumps and came in sixth in what was her ISU Championship debut.

“There were a few pretty big mistakes, but overall, this was the most pressure I think I’ve had in an event, so it was good to be able to go out and manage that was a big step for me,” said Bell, 20. “It’s something I’m going to take away from this and learn from for the next competition. I have a lot I can improve on, but not bad for my first Four Continents.”

Kazakhstan’s Elizabet Tursynbaeva stood in third following a strong short program, competing two days after her 17th birthday. However, in the free, the pressure seemed to get to her and she missed two jumps and singled the loop and faded to eighth place.

“It didn’t go well,” the disappointed teenager told the press. “Maybe I was a little tired and maybe nervous. I should put all my effort into the competition, not only into the practice. Next, I’m going to the Asian Winter Games and maybe Junior Worlds before Worlds. My goal is to skate better than here.”