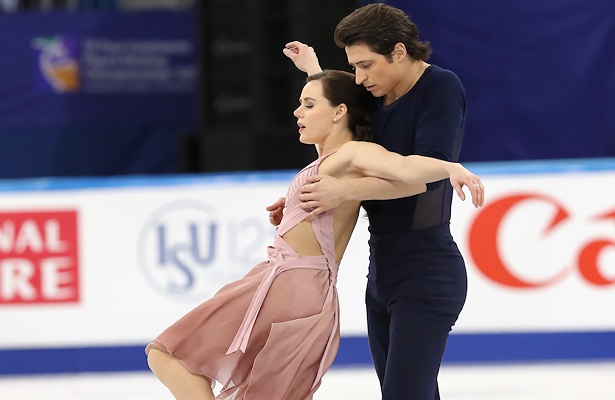 Canada’s Tessa Virtue and Scott Moir continued their winning ways in their comeback season, dancing to gold at the 2017 ISU Four Continents Figure Skating Championships in Gangneung, Korea. Defending champions Maia Shibutani and Alex Shibutani of the USA settled for the silver, while the bronze went to teammates Madison Chock and Evan Bates.

Virtue and Moir made it clear from the beginning of the season that they are serious about their comeback and they continued right where they had left off when taking a break following the Olympic Winter Games in 2014: at the top level. Four Continents was no exception – it was the sixth competition of the pre-Olympic season and the sixth victory for the Canadian stars.

The 2010 Olympic champions were off to a good start in the short dance, performing strongly to the Prince songs “Kiss,” “Five Women” and “Purple Rain.” However, Moir had a slight wobble in the partial step sequence and was not entirely satisfied with the program, although the ISU Grand Prix Final Champions scored 79.75 points, just below their personal best.

“We made a little bit of an error in one of our elements and you cannot afford to do that if you want to be the top in the world,” Moir acknowledged. “We’re not completely satisfied, but we never really are. We’re perfectionists. We’re using this competition to build, and we really tried to push ourselves and show the artistic side of the program today, as well as to get those levels. I hope we did it in some parts, but it cost us a couple of points there in the PST (partial step sequence) especially.”

Nevertheless, the 2014 Olympic silver medalists led by four points over Maia and Alex Shibutani and managed to extend their lead in the free dance. Their lyrical dance to “Pilgrims on a Long Journey” and “Latch” was smooth and highlighted by beautiful lifts. The Canadian champions got a level four for all elements except the circular footwork (which was graded a level three) and with a new personal best of 117.20 points, they racked up 196.95 points overall, just short of their own record total score from the Grand Prix Final.

“Another title, but another great learning experience,” Virtue shared. “We’ve said all along this entire comeback for us was just leading up the Olympic Games. So having the opportunity to simulate things here in this venue was really important to us and really magical and I think this will help us a lot moving forward, getting home, being able to visualize the venue and the surrounding areas. It’s a great advantage.”

“It’s an interesting dichotomy,” she continued. “In coming back, we obviously wanted to win. I think every athlete enters every competition with that goal in mind, and the Olympic Games in 2018 is the ultimate goal. More than that, after two years away from competition, we realized what really was important to us. We were very process-driven. We wanted to create art and programs that we loved and connected with. We wanted to enjoy being athletes again. So, our focus has not really been the results, but because of that, that has grown out some success. That’s a confidence boost for sure. It adds a little extra pressure, but it’s nice to know that we are on the right track.”

However, the “perfectionists” were not one hundred percent satisfied with themselves.

“It certainly didn’t feel our best in certain ways,” Virtue said. “We have really improved the program. We made a few technical glitches, but ultimately that comes down to training. We know that these programs are so well trained that even on worst days it’s not the end of the world.”

During the awards ceremony, the Canadian flag did not unfold due to technical reasons, but the dancers took it in stride.

“We feel bad for the poor guy that was holding it,” said Moir. “Mistakes happen. We’ve been so impressed with the volunteers here, even the organization of all those beautiful venues. That stuff just happens. The anthem played great, it was still a great moment for us and it didn’t affect us at all.”

Shibutani and Shibutani also looked very strong in the competition, in the Blues and Hip Hop short dance, as well as in their soft and flowing dance titled “Evolution.” The defending Four Continents champions had the same levels as Virtue and Moir in the free dance and achieved a personal best with 115.26 points as well, which added up to 191.85 points overall.

“We performed the way that we wanted to at this point and we’re excited about the work that we can put in going into the World Championships,” Alex Shibutani told the press. “These are definitely our strongest two programs so far in the season, and it’s nice to execute everything technically and artistically the way we’ve practiced in both programs.”

The siblings had to overcome a little shock in the warm up when they both fell, but the team didn’t let that affect them.

“The warm up today was a little bit unusual,” Alex Shibutani explained. “We both went down on a very simple thing. I think that we’re both very tough competitors and very mentally strong, so it didn’t bother us. We took the time to do what we needed to do and we focused on executing the performance we were planning on. We’re very proud of how we handled it.”

Unlike the other top teams, Chock and Bates had the most upbeat free dance with “Under Pressure” by David Bowie and Freddie Mercury, compared to the more lyrical style the others have chosen. Their Blues and Hip Hop short dance is also very contemporary with “Bad to the Bone” and “Uptown Funk.” The 2016 World bronze medalists made no errors and had very good levels – mostly level fours – and a few level threes for footwork. The team scored 185.58 points.

“We feel really happy with how we skated,” said Chock said of their free dance. “This is such a fun program for us. We love skating it and I felt like we really connected with each other. It feels especially good to do that in competition. I think the audience really enjoyed it, so that makes us really proud.”

“We have a long time before Worlds now,” Bates pointed out, “so I’d imagine there will be some strategic tweaking here and there with both programs. I think most of our attention will be on our footwork where we didn’t get levels today. We got Level 3s yesterday, so there’s room for improvement. That will be our main focus.”

USA’s Madison Hubbell and Zachary Donohue were close to the podium with a strong short dance, but Donohue wobbled twice in the circular footwork and the twizzles in the free dance. As a result, they were ranked sixth in that segment and remained in fourth place.

“I made two pretty costly mistakes, both in level and in GOE (Grade of Execution),” Donohue admitted. “The overall performance was pretty good, but not as strong as we’ve been practicing at home. It was a little more reserved, but we know there’s a lot more this program has to offer and we’re going to find it.”

Canadians Kaitlyn Weaver and Andrew Poje have lost some ground compared to the other top teams and they cannot afford to make mistakes. In the short dance, Poje struggled with the twizzles, but otherwise the program looked strong. However, only the lift was a level four. The Michael Jackson program itself is great.

The 2015 World bronze medalists caught up with their passionate, romantic free dance to “Aranjuez,” where the levels were stronger. Weaver and Poje were ranked fourth in the free dance, but remained in fifth place, narrowly edged out by Hubbell and Donohue.

“I think last time we had fifth place (in the short dance) was like 2011, so that gave us extra motivation for today,” said Weaver. “It gave us extra emotion, which ends up with great performances usually. Today is no exception. I think I did one less twizzle. It seems to be the twizzle mistake competition, but we love what we do and we enjoy it.”

“We want to keep boosting those marks,” she continued. “We feel like we belong with the top teams in the world. We need to do some work before the World Championships, but we have plenty of time. We never lose hope, we’re fighters, we’re underdogs. We’ll go back to work and show up stronger next time.”

Teammates Piper Gilles and Paul Poirier had to overcome an even bigger disappointment in the short dance as she fell in the side by side footwork, which left them into seventh place. The Tango free dance went much better and the Canadians moved up to sixth.

“It was physically hard and definitely tough mentally,” Gilles explained. “Going into this competition, we both felt really strong. We really wanted to give two solid performances, but obviously, that didn’t happen yesterday. So, we really had to kind of mentally regroup and look at the positive side and think of all the good things we’ve done so far this season and know that we’re super comfortable with this program and we can rely on this every time we go out. We’re very happy with what we did today. Obviously, we’ll keep pushing, we want to be in the last group because we feel like we belong with some of the best teams out there.”

As usual, the top six spots at the Four Continents were occupied by North American ice dancers. Shiyue Wang and Xinyu Liu of China came seventh with solid performances.

“The performance felt good,” said Liu. “At first we thought we were lacking a bit in the technical part, but now after seeing the detailed scores, I can say that the levels were actually okay.

“Our goal was to experience the Olympic ice rink and to get another competition under our belts,” he added.

Yura Min and Alexander Gamelin, who represent South Korea – he is American and she is Korean-American – left a good impression with clean programs to finish eighth.

Japan’s Kana Muramoto and Chris Reed made no major errors, but had relatively low levels and placed ninth.

“The performance itself was good considering that we have some injury problems,” Muramoto shared. “The levels again, like in the short dance, were not what we expected, but it just means we’ll need to work on them.”