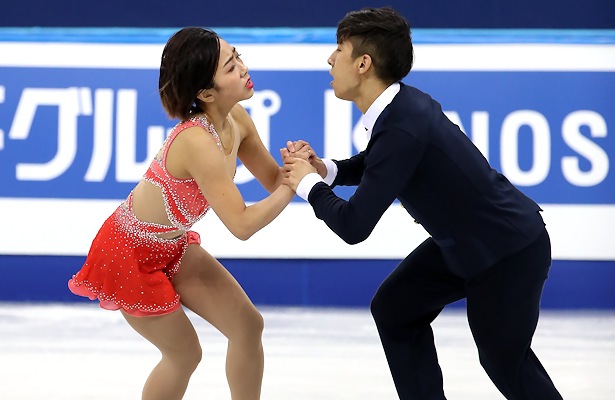 When Wenjing Sui and Cong Han had to withdraw from their Grand Prix events earlier this season as she was still recovering from surgery, not many would have believed that they could come back so strong. However, the Chinese team, proved that they are back in action and ready to challenge anyone after claiming their fourth Four Continents title.

Reigning World Champions Meagan Duhamel and Eric Radford of Canada took the silver medal. While Duhamel and Radford had hoped for better performances, their teammates Liubov Ilyushechkina and Dylan Moscovitch were absolutely thrilled with what they did and with winning the bronze medal, their first ISU Championship medal as a team.

Sui had undergone surgery on both feet following the past season. The recovery took several months and Four Continents was only their first competition of the season. Nevertheless, the two-time World silver medalists did not really let that show and took the lead with a clean short program to “Blues for Klook.”

In the free skate to “Bridge Over Troubled Water,” the Chinese team produced a quad twist and impressive throws, as well as a triple toe-double toe combo. Sui only crashed on an underrotated triple Salchow. The team earned a big score with 144.28 points in the free and won with 225.03 points.

“First of all, I am lucky to be back,” Sui said. She felt that the free program is telling their own story.

“When we chose the long program, everybody loved it, the coach and (choreographer) Lori (Nichol) loved it,” she continued. “The lyrics describe our experience after the operation. It was such a hard time. My life was very painful and I was crying every day. My partner helped me a lot and encouraged me. He said things will get better and you’ll get back soon. When I came back to ice rink he was afraid that I was in pain, but I said that’s okay. It’s just like the lyrics said, we help each other and work together.”

The skaters were rightfully proud of what they achieved, but still critical of themselves.

“It is a big honor for us to have won this title for the fourth time,” said Han, “but we got this medal not only for us. We owe it to everyone who is around us and helped us to come back. We were reborn in this championship. There were many challenges that we had to overcome and we are very happy we did that.”

“It was hard for us,” he pointed out. “We still have some problems that came out today and that we need to fix. We still need more time to practice in order to improve.”

Sui and Han have really improved as performers and show intricate choreography as both programs proved.

Duhamel and Radford haven’t yet found “their groove” this season, as Duhamel put it. Radford fell on the triple Lutz in the short program, and in the free, the quad throw Salchow and the throw triple Lutz were not clean. However, the side by side triple Salchow and other elements such as the lifts were well done. The two-time World champions were third in the short and moved up to second in the free with 212.23 points.

“This season we’re having a little bit of a hard time finding our groove, very similar to last season,” said Duhamel. “It’s part of our journey. We’re going to have to find a way to get ourselves feeling comfortable and stable every single time we go into our starting position in competition. But this was definitely a step up from the Grand Prix Final that was an absolute disaster. There’s a lot we’re going to take away from this and bring forward into our training for Worlds and also into preparing for next season, which is ultimately where we want to be at our peak.”

“I don’t know why, but I felt very nervous for this long program,” Radford admitted. “Me personally I got it together just when we took our starting position. So I’m very, very proud of how we skated. There were a lot of little things, but we stayed on our feet and that felt like it was going to be impossible before. So, that was a step into the right direction heading into Worlds.”

Ilyushechkina and Moscovitch often struggled with the solo jumps in the past, but this time they worked in both programs, except for one underrotation on the triple Salchow in the free. The only major error came when she fell on the throw triple loop in the free skating. The Russian-Canadian team ranked fourth in both segments, however, came in third overall at 205.31 points.

“It is very exciting for me to win the medal for the country which I love the most and which I am passionate about,” Ilyushechkina commented. “I got to compete at Europeans once and got fifth. This is my third Four Continents and the first championship medal. It gives me a nice feeling and the goosebumps about the improvements we’ve made as a team and about the I went to get to this point. It definitely sets up the excitement for the next big steps.”

“We’re happy with how our free skate went,” Moscovitch added. “It was definitely an improvement, it was a big step for us to land the jumps in both programs. The program got a little bit away from us in the end. We stiffened up and I think that second throw mentally took off before it even was set up. We just have to work on collecting ourselves time and time again throughout the program.”

Xiaoyu Yu and Hao Zhang of China sat in second following an excellent short program. They opened the free with a quad twist, but then she doubled the toe loop in the combination. Although there were no further major errors, overall, the ISU Grand Prix Final silver medalists looked a bit slow and lost points on the grades of execution (GOE) and in the components. They dropped to fourth at 203.40 points.

“Today we didn’t show our best skating,” Zhang observed. “We included the quad twist for the first time in competition. It is a very difficult element for us and we’ve done only like three complete run-throughs of our program with it. It takes a lot of energy. We need to practice more.”

Teammates Cheng Peng and Yang Jin lost their medal chances in the short when she fell unexpectedly on the side by side spin.

“I think I got over-excited because the program has been going so well and I lost my focus,” Peng explained. “The spin is not an element you expect a mistake to happen.”

The free skate went much better for the team as there were no mistake and the elements were of good quality. The ISU Grand Prix of Figure Skating Finalists moved up two spots to fifth place.

“This was our best performance in competition so far and we got a personal best score,” said Jin. “Still, we were holding a bit back on some elements and could have had more speed.”

Like Sui and Han, USA’s Alexa Scimeca Knierim and Chris Knierim had a comeback story. Scimeca Knierim underwent stomach surgery and they, too, were unable to compete in the fall and at nationals. However, they came out as the top U.S. team in Gangneung. The short was a bit shaky on some elements and in the free he made errors on the solo jumps, but their triple twist was great and also the throws went well. The married couple came in sixth, which was a little victory in itself. It was actually the first time for them to compete since they got married last summer.

“I think it feels different, I really do,” said Scimeca Knierim, “and I think it might have to do with everything we’ve been through this year with my illness. It was coincidentally around the same time that we got married, but with all we’ve gone through together, it really is a different place. It feels like nothing can harm us.”

Her husband agreed. “We’re more connected. Being married hasn’t really changed off-ice or our training at all. As far as skating, it didn’t change much of that. But competing now, married, I feel more connected to her while I’m skating. I’m not listening to the noise that’s going on all around me, I’m just looking at her.”