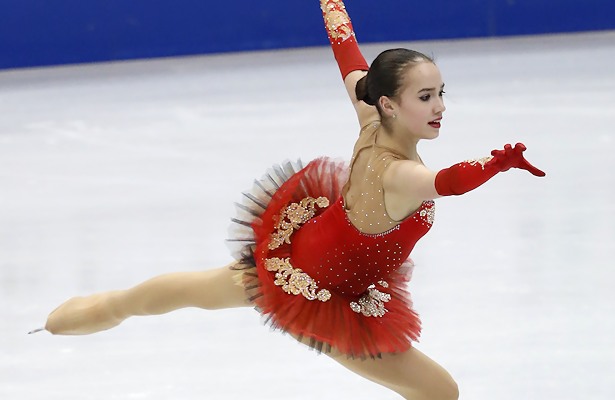 Russian and Japanese skaters have dominated in Ladies at Junior Worlds since 2009 and even have won all the medals since 2013 in this discipline. 2017 was no different as Russia’s Alina Zagitova topped the podium while Japanese skaters Marin Honda and Kaori Sakamoto earned the silver and bronze medals.

The top three were just amazing and gave clean performances, packed with the maximum degree of difficulty: They all hit seven triples in the long and three triples in the short, obviously, they showed triple-triple combos and had level fours for the spins and footwork (only Sakamoto’s step sequence in the free was a level three).

Zagitova had the edge over her competitors by maxing out the technical content. She was the only skater to land a triple Lutz-triple loop combination and to have all jumps in the second half of the program. The 14-year-old skated with the precision of a Swiss clockwork and hit her jumps right on the beat of the music, like an exclamation mark: look here, what I can do!

No doubt, the judges were looking. The rhythmic “Don Quixote” long program was an especially clever choice, underlining Zagitova’s precise movement and timing. She also impressed in the short to “Samson and Dalilah,” but couldn’t do her Lutz-loop combo as the loop is the required solo jump in the junior short program this season. She did the standard triple Lutz-triple toe instead. Zagitova scored a new personal best in the free with 138.02 points (which is the fifth highest of the season and she has one element less than the seniors) and had 208.60 points overall.

Zagitova skated right after Honda, who had put out a spectacular performance. “Of course, it was very hard to skate right after Marin,” she said. “I knew I could not make any mistake. I realized if I make one mistake, I won’t be first anymore, therefore I was nervous. But when I got into my opening pose, all doubts disappeared and I started to skate.”

“First of all, this title is a victory over myself and I am very happy about that,” the Russian Junior Champion noted. She added with a smile that for once it was good that her English is very limited – she didn’t understand Honda’s score. “When I landed the Lutz-loop, I knew that the program would go well. This combination is a key moment in my program.”

The ISU Junior Grand Prix Final champion said that she is not sure yet whether she will move up to the senior level, but she would like to do at least some senior competitions to test herself against the senior skaters.

Honda did not have as good as a season as Zagitova. The 15-year-old qualified for the Junior Grand Prix Final, but then had to withdraw as she came down with the flu. She only finished third at junior nationals and was lucky to qualify for Junior Worlds. However, in Taipei, everything came together for the Japanese skater. She posted personal best scores in short to “Smile” and long to “Romeo and Juliet” and totaled 201.41 points.

“I believe I performed this year better compared to last year,” Honda told the press. “However, I am still disappointed with the result and with the performance. In practice, I was able to do such a clean performance like today only like five times. So, I was kind of surprised I did such a good job today.”

Compared to Zagitova, Honda is the “softer” skater and especially the flow out of her jumps is beautiful.

Sakamoto had been to Junior Worlds once, in 2015, and finished sixth. She did not qualify for the event the year after, but now has improved her consistency. She skated clean and scored 195.54 points.

“Two seasons ago and this season I felt the same – I just have to do what I can do,” the 16-year-old said. “But the difference is that two years ago, I thought I’ll never be able to beat the Russian girls. Now I started to think that maybe I can after all. Two years ago, I could have won with this kind of performance. This year, the whole level of the competition is higher. So, I couldn’t make any mistake.”

While the top three were outstanding, there were several other skaters that gave strong performances and are promising. One of them is South Korea’s Eunsoo Lim, who has high and powerful jumps. She fell on a triple Lutz in the free, but the rest was good and she placed fourth in her debut at Junior Worlds.

Yuna Shiraiw is another member of the Japanese powerhouse and came fifth, again, with one fall. Russia’s Stanislava Konstantinova had higher ambitions than sixth place, but the fall on a popped loop in the short, and a single Lutz and a botched Axel in the free, cost points.

USA’s Bradie Tennell had problems with her triple Lutz in the free, but was solid otherwise and ranked seventh. Lea Johanna Dastich of Germany moved up from 13th to eighth with a clean free that included seven triples.