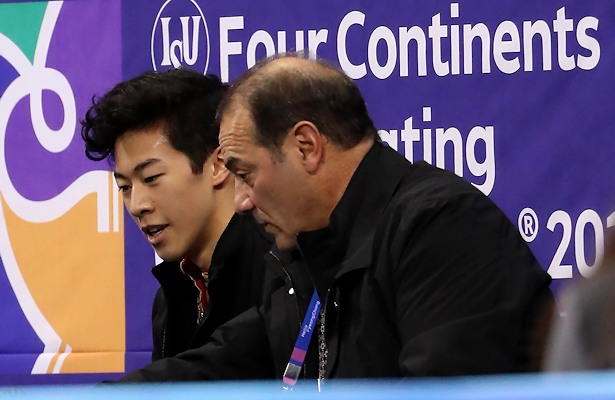 The American technician won with a total combined score of 307.46; bolstered by improved components scores nearly 20 points higher than his first outing of the season at Finlandia Trophy where he placed first with 256.44.

“I am really satisfied with what is happening with Nathan,” said coach Rafael Arutyunyan. “He is older and more sensible now. His skating at Four Continents was more mature than at Finlandia, which was only four months prior. But he is at that age where whenever he gets more and more technical and fully fledged as a man, it quickly shows, so hopefully he will keep doing what he does.”

In the short program at the Four Continents Championships, where Chen executed a quadruple Lutz-triple toe loop combination, a quadruple flip and triple Axel, as well level four spins and footwork, the 17-year-old’s components score was 43.54. He received as much as 9.5 for performance, composition, and musical interpretation. These were the fourth best components scores of the night with only Yuzuru Hanyu, Patrick Chan, and Shoma Uno edging him at 46.93, 45.76 and 44.21 points, respectively.

In the free skate, Chen garnered a whopping 88.86 points for components including scores as high as 9.25 for skating skills, performance, and musical interpretation, and 9.50 for composition. Again, these were the fourth-best components scores of the night behind Hanyu, Chan and Uno at 94.34, 92.58 and 91.08, respectively.

Arutyunyan makes no apologies for the standings shake up his pupil has triggered. “He is one of the top six men in the world which was proven by the Grand Prix Final, and I think he can be on top of the figure skating world.”

Chen’s improvement in components is noticeable. The following table charts his components trajectory over the season:

Arutyunyan explained that the bump up in components scores is a simple reflection of the ease with which Chen now approaches his technically-packed programs. Essentially, practice makes perfect, the veteran coach insists.

“The key is to get comfortable with what you need to do and then perform,” said Arutyunyan. “Today, to skate cleanly, Nathan doesn’t have to concentrate as deeply and can dedicate more energy to the program. As I said, this year he has become more mature, and his elements have gotten better. Between the elements, he moves with more emotions because he has started to get used to it all.”

Furthermore, Arutyunyan feels skating fans need to give his skater some latitude in his on-ice presence given the demanding quadruples he executes.

“He jumps five quads, one of which he jumps out of spread eagle,” he explained. “What else could one expect him to do in this situation – do a belly dance and smile or something?

Arutyunyan groans at the age-old comparison between artist and athlete and shudders at the casting of Chen as the athlete and Hanyu as the artist on social media and discussion boards as the Olympic drum beat builds.

“It’s best say to say that it’s a combination of of the artist and the athlete in both of them, and it’s always subjective,” said the 59-year-old coach of Armenian background who spent many years working in Russia.

The coach is also befuddled as to how this components kerfuffle has emerged in the men’s event. In fact, he sees a far greater controversy in the ladies’ event where he feels superior artists such as Carolina Kostner, Kaetlyn Osmond and his pupil, Ashley Wagner, are regularly out-pointed in components scores against their Russian competitors.

“We are not discussing this and I don’t know why,” he said. “They are basically doing the same elements and the Russians are more consistent, which I can agree with, but we don’t discuss components scores which surprises me competition after competition.”

To those who are resolute that Chen’s components scores are too high, Arutyunyan said to stay tuned.

Arutyunyan also said his jump entries will become more dynamic. “As jumps get easier, I will make him get the jumps with more exciting entries, but everything needs time to make it happen.”

The coach added that they’re not just looking to unveil improvements in Chen’s already-exhilarating skating for the Olympic season. Skating fans may see some changes in Chen’s programs as early as this month’s World Championships in Helsinki, Finland.