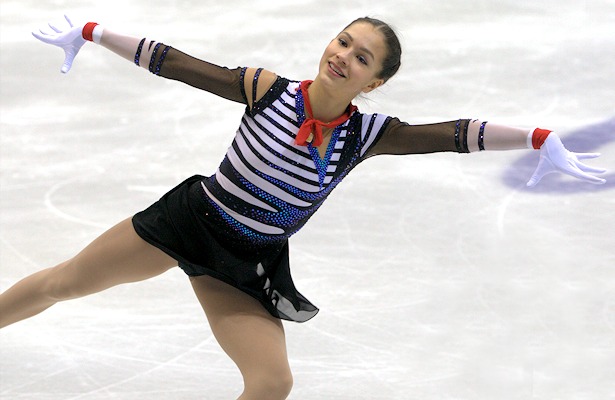 No doubt, the competition among Russian ladies is currently the toughest in the world, as Stanislava Konstantinova knows very well. The window of opportunity is very small. At age 16, most of the top Russian lady skaters have at least qualified for the ISU Junior Grand Prix Final, Junior Worlds, or even Europeans and Worlds. If they haven’t, they can call it quits, look for another country to represent, or switch to pairs or ice dance. However, there are always exceptions to the rule and Konstantinova is one of them.

At age 16, the skater from St. Petersburg was the oldest competitor in the Ladies’ event at Russian Junior Nationals. She came away with the silver medal and booked her spot for the 2017 ISU World Junior Figure Skating Championships in Taipei, Chinese Taipei, this month. Mind you, Evgenia Medvedeva was 16 when she won the European and World titles in 2016, and usually the Russian “wunderkinder” take the junior stage by storm in their first year of eligibility.

Konstantinova felt that the result at Junior Nationals was the most important one of her career. Prior to that event, the teenager competed on the Junior Grand Prix (JGP) circuit for the first time this season and was a substitute for the JGP Final.

“Last season, I also skated well, but I didn’t get to go to international events as the competition is very strong (in Russia),” she explained. “On one hand, this competition is pushing you, (while) on the other hand it is also a little depressing, because all the younger girls are jumping so well and jump everything. But I try not to lag behind and not to think about it. It is interesting when you have to fight and when there is strong competition.”

By Russian standards, Konstantinova is a late bloomer. She attributes her progress for both the current and past season to the fact that she started to work harder and feels that she has changed as a result.

“Sometimes I’m thinking I am so grown up already,” she said. “Others at my age are competing at the World Championship. Then I realize that everyone has their own path, everyone gets to certain points at a different time and draws conclusions at a different time. I am not chasing after results. I never did that. I didn’t have great results from the beginning of my career. When I came to the ice rink, I was seven years old and I was already lagging behind.”

In fact, in Russia, children usually start skating at age four or five, and even sometimes at three years old. However, the high school student feels encouraged by her coach, Valentina Chebotareva, who told her that skating seriously starts only with 14 or 15 years, and so she just tries to stay on par with the younger girls.

Konstantinova, whose parents are former athletes – her mother competed in rhythmic gymnastics and in track and field in her youth and her father is a black belt in karate – started skating by chance as there was an ice rink close to her home. She was just training in a recreational group, without any serious ambitions.

“Then I got a little better and a friend of my mom suggested that I should go to the figure skating academy and present myself to Valentina Mikhailovna (Chebotareva),” she recalled.

Chebotareva, who also is coaching Russian champion Mikhail Kolyada, agreed to take the then nine-year-old girl. In the meantime, Konstantinova’s five-year-old sister Kristina has taken up figure skating as well. Today, the Russian Junior silver medalist feels inspired by her teammate Kolyada, who earned the bronze medal at the European championships in January.

“We have a very friendly team,” said Konstantinova. “Our coach and choreographer have been teaching us since the beginning. From Misha (Mikhail), I can take his attitude. I am impressed and inspired by the way Misha motivates himself for practice and for competition. He is always calm and cool-headed.”

The 16-year-old describes her personality as “a little quiet” and says she tries not to show her emotions, although she admits to being very emotional and quick-tempered.

“I have a difficult character, but I try to overcome it and to achieve something in the sport,” Konstantinova shared, adding that she was more withdrawn when she was younger. “It is hard to work with someone who is overtaken by emotions and explosive. In competition, I try to transmit my energy to the audience. I am working on myself, trying to be more sociable, more open, and not to be a grey mouse.”

The skater, who enjoys drawing and designing her practice costumes in her spare time, doesn’t look like a “grey mouse” on the ice as she skates with expression and visible joy.

“It is not just a hobby, but I am not going to practice like to work,” said Konstantinova. “It is for my soul. I just love skating and I have goals, but I’m not skating for results, just for the process itself.”

Junior Worlds in Taipei will be the biggest event Konstantinova has competed in to date. Her goal is to get the world level and show clean skating without stumbles and mistakes.

“This is my main task, because obviously, there will be very strong competitors and I can expect something only with ideal performances,” she acknowledged. “I just want to go there and live up to the expectations.”

Nevertheless, the skater has realized that she has a chance to break through.

“You know, in the beginning of the season, I didn’t even think about the Olympics,” she said. “I thought that my time hasn’t come yet, but after Russian Nationals (where she placed sixth with strong performances), I realized that I can skate at the senior level.”