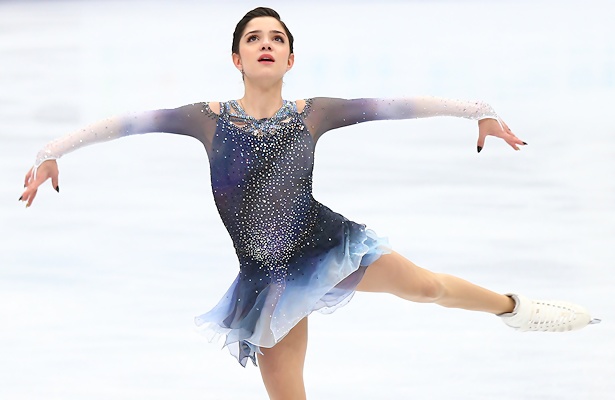 Before the start of the event, few doubted that Medvedeva would be a front-runner of the competition, but the event was not quite as smooth as one would have expected.

The 17-year-old delivered a clean short program, which scored only 0.2 point below her own record score, but told the press that she was not happy with the mood with which she approached the performance.

“All and all am happy with my skate,” she said of the short. “There were some small details that did not make me happy. It was mainly my attitude. I think I have to do some work on my head and straighten it somehow.”

The discipline, she believes, is the key to success.

“It’s quite a scientific topic and we could talk about it for hours,” she said about her ability to deliver difficult content throughout the puberty. “Frankly, in the last year or year and half, I was very cautious about my body. I am no longer able to do whatever I want, like eat after 6pm or eat as much as I want and not to feel it later.”

“Frankly, I’ve never been in another person’s body, so I can’t tell whether it’s easier or harder for me,” the 17-year-old continued. “It is different from 1 or 2 years ago, but the main secret and my motivation is the discipline. The sport itself is the discipline. You have to control yourself every day and every time you let yourself go, you start hating yourself. Everyone had been through that. So in short, it’s discipline.”

The two-time European Champion, who started the season with a long program to the The Leftovers soundtrack with all triple jumps planned for the second half of the program, decided to abandon it in favor of a new program set to “Anna Karenina” soundtrack with a more balanced layout.

“Karenina” was initially developed as an exhibition piece and according to Medvedeva, she felt far greater connection to it than to “The Leftovers” program. The debut of the new program went pretty well until the final minute when the skater unexpectedly fell on a double Axel.

“I was satisfied with today’s skate, I think I did a fine job,” she said later on. “The last double Axel was funny… I made some mistakes and had troubles with the jumps in the practices, but surely not with a double Axel and not with the last one.”

“I am not upset about this mistake,” the two-time Russian national champion added. “Usually, if I make a mistake, I tend to focus on it, especially if it was something predictable. I know all my weak points and I am disappointed if they manifest in competition. But this mistake was completely unexpected, so I can treat it with humour. I guess it was the lack of focus, I let go too early. I think this mistake will be for good me in the long run. I will work on it in the future.”

The second place unexpectedly went to Kostner, who did not attempt any triple Lutzes in the competition. On the same token, the Italian did not make a single mistake in both programs, picking up high levels of difficulty and good program components scores for her “Ne Me Quitte Pas” and “L’apres-midi d’un faun” routines.

“I came here without any expectations,” said the 2017 European Championships bronze medalist. “What I have learned from Sochi is that life sometimes surprises you. You should never be too fixed on one thing. It was a big goal for me to skate clean and I was able to perform quite clean both programs and it’s very exciting. I think there is still so much space to improve artistically and technically, but to start with these scores, it is very exciting.”

Kostner went on to explain the difference in her short and long program. In the short, she felt emotions “coming from the inside and tried to communicate it to the audience.”

“[In the long program] it was the other way around,” said the 30-year-old. “I felt that the audience helped me to gather the strength and power that I needed to push through. It was actually very special. It means that every day is different and every day is a start from zero almost. Like I started a year and a half ago from zero, so standing here, being able to perform well, being healthy and being able to go home with a smile and a medal, is great.”

The skater, who now trains with Alexei Mishin, says she does not feel any extra pressure now that she started to win medals after her comeback to competitive sport.

“It’s a process,” explained the 2014 Olympic bronze medalist. “I knew very well last year where I was standing. I was very realistic and respectful with my body and with my timing. The body is not like a radio, you cannot switch it ‘on’ and go. You first have to accept it and then to deal with it. So I have to thank all my staff for being patient and for pushing me always a little bit over much edge so that I could improve.”

The Italian is also extremely grateful to her choreographer, Lori Nichol.

“She always had a long-term vision of what ‘can Carolina reach,'” said the skater. “I think she never had a ceiling set for me and that’s why every season she brought me a step over my limit. It was with ‘Bolero,’ with ‘Ave Maria,’ with Led Zeppelin’ program last year, or with ‘Ne Me Quitte Pas’ this year.

It’s always something that in the beginning is a bit of ‘Oh, oh, may be it is too….,'” Kostner explained. “Sometimes you may be even angry with her at first, but eventually everything works out. I fell in love with all my programs, even those that were different and difficult.”

Kostner has already skated to Claude Debussy’s music in 2010-2011 season, but believe that it was very different program.

“Back then, I was just learning to appreciate the history of skating and skater like John Curry,” said the eight-time Italian champion. “Lori started showing me his skating and telling me about the quality of the lines, while for me it was just landing my jumps and skating fast. She was a huge help in defining skating for me and making skating not only about technique, but about the art and I found myself very much at home.”

“The music expresses how I feel about skating, it’s pure joy,” Kostner summed up. “It’s one of the first classical pieces that challenged true classical rules. My skating is a bit the same – I love to be classical, but then I like putting my personality into it and it fits very well. I want to feel joy when I skate. That’s what has accompanied my skating career and I feel privileged and honored to experience that.”

Wakaba Higuchi of Japan won the bronze with 207.17 points in total. The student of Koji Okajima, Noriko Sato, Yuka Kagayama delivered an expressive Gypsy Dance in the short program and a sensuous routine to “Skyfall” in the long. However, her combination jump in the short program was underrotated and she popped her planned triple Salchow into a double in the long.

“First of all am happy,” said the Japanese Championships silver medalist. “I am glad I did not repeat the mistakes I did in the short program and I was able to focus from the beginning to the end.”

“After the Lombardia Trophy, I have been training very well and I had good flow, which I couldn’t quite show yet here, but hopefully I can show it in my next competition,” the 16-year-old said.

The skater, who works on triple Axels in practice, does not plan to include it in competitive programs this year.

“It is not as consistent as I want it to be,” Higuchi admitted. “I have many other things to practice on this season. I haven’t nailed other jumps to the consistency that I need, so I will probably not perform the triple Axel this season in the competition. Sometimes I try it during run-throughs, and I have learned that it is hard to concentrate on the other jumps when doing a triple Axel. I like to make the other jumps more steady and consistent before I try the other big jumps.”

Elena Radionova pulled one spot up to finish fourth with 195.52 points. The skater, who had changed coaches during the off season, did not receive full credit for her triple Lutz – triple toe loop combination in either the short or the long, and the technical panel rated the take off edge of her flip as ‘not clear enough.’ Otherwise, she was skating fairly well until she slipped off the entry edge for a triple loop towards the end of her long program to “Historia de un amor.”

“I skated with more confidence in the long than in the short,” said the student of Elena Buyanova. “I am extremely upset about the mistake on the loop. I have no idea where it came from. Naturally, I wanted to show my best, unfortunately, it did not happen.”