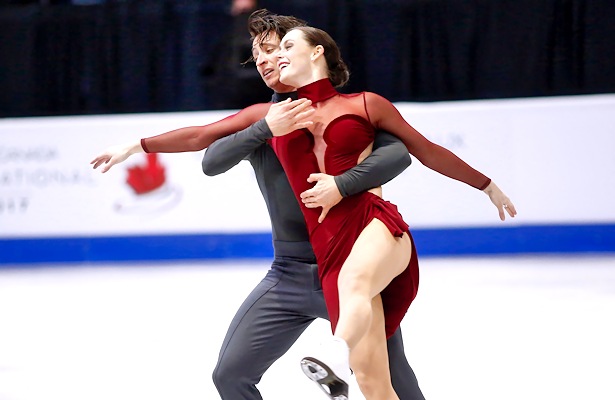 Virtue and Moir set a new record in the short dance (82.68) and total combined scores (199.86). Their free dance score (117.18) was a mere .02 points off their personal best from the 2017 Four Continents Championships. In total, the team scored 29 perfect tens in component scores from the short and free dances.

The seven-time Canadian Champions took command of the competition with their world-record scoring short dance set to nineties rock music.

“We don’t have a choice, we know who we are competing against,” Moir said after the short dance of their need for a big score. “We want to win this competition. We know that Kaetlyn and Andrew will bring their A-Game, they always do. We train with Maddy and Zach, so we knew we had to post a score like that in order to be on top.”

The 2010 Olympic Champions sported new sleek costumes for their free dance to Moulin Rouge; Virtue in a backless form-fitting burgundy dress and Moir in deep grey. “It’s sort of a natural evolution in the costuming of this program,” Virtue explained. “We wanted to start the pre-season at Autumn Classic very character-driven and character-based; really based off the movie, with Satine and Christian, and I think then shift to a bit more of a contemporary look that hopefully shows off the lines and the specific movement. Moulin Rouge with a twist.”

“It went quite well,” Virtue said of the free dance, which featured dramatic lift entries with Virtue leaping upon Moir before the rotation. “We had a couple bobbles on one of our footworks, but overall, I liked our attack and I think we recovered really well and that’s a testament to our training.”

“I’d like to think this is our last one and we are really taking it all in,” Moir said of the team’s final showing at Skate Canada International.
“It’s a nice confidence boost,” Virtue said of the scores. “We know exactly where those improvements need to be made and there’s no reason why we can’t have that at NHK. It’s validation that we are on the right track. We are in a very secure place.”

“We’d love to have a perfect score sheet at the Olympic Games and that’s a goal of ours,” Moir added of this scoring stepping stone.

Teammates Weaver and Poje delivered two steady dances for a total score of 190.01 that showed they are keeping pace with their improvements from last season’s coaching change. The team managed six level four elements in their free dance, more than any other team in the competition, but received a deduction for an extended rotational lift.

“With Latin, you have to look like you’re having a ball or else it doesn’t look like it comes across,” said Weaver on her team’s outing which garnered a personal best score (77.47). “So, we injected a lot of fun into this program, which now looking back, it’s like, ‘Why did we not do that before?’ So we’re very excited that now this represents this light-hearted aspect of ourselves, as well. This is us having fun out there.”

The two-time Canadian Champions surprised many with their announcement prior to the competition that they would be scrapping their planned “Spartacus” free dance and resurrecting “Je Suis Malade” from the 2011-12 season that helped boost their profile.

“We felt that we had a great program with “Spartacus,,” which was our original free dance this season, but there was something missing,” Weaver explained. “In an Olympic year, we feel that’s its very important for us to state out case immediately and build.”

“There wasn’t a lot of time for us to figure out what was missing in “Spartacus” and we knew that we had to lead with our best foot forward,” she continued. “It was brought to our attention by [coach] Nikolai [Morozov] that he thinks we should change and right away we felt it was right. The rules have changes, so we had to update a few things, but ultimately, this is the best that we can be. This program, we feel, is very representative of us and our team and it feels good.”

Weaver estimates that 40 percent of the program content was changed from the original “but we kept the essence of it,” she added. “Those moments that were memorable, we kept.”

“We were happy, nervous, and excited because there was so little time to prepare, but at the same time, if felt good to get it out there,” Poje added. “It felt at peace knowing that we are in the right direction for the season.”

“We know where this needs to go and we have a perfect vision of where it needs to go,” Weaver added of the program’s potential, which earned them 112.54 at this event. “The next time out definitely will be stronger and faster and more intense.”

The Americans settled for bronze, however, had the satisfaction of placing second in their sultry and jazzy free dance set to “Caught Out in the Rain” by Beth Hart and Across the Sky. They earned a personal best free dance score of 113.35 and total combined score of 189.43. The achievement left Hubbell emotional.

“Zach and I are filled with gratitude now, feeling very happy,” she said. “Gratitude for each other and for our team for training us so well. We are really proud of our skate today and almost got teary-eyed on the podium, but I didn’t want it to look bad. It was a really great day for us and we’re looking forward to going back home and training more.”

“My small mistake in the midline yesterday in the short, those three points and the extended music really show us where we can be,” Donohue reflected. “We would have been pushing 80. For our first real event of the season, that means a lot to us, so we are taking a lot of confidence out of this and we are really ready to push forward.”

While Donohue concedes that placing higher at Skate Canada International against two strong Canadian teams would have been an uphill battle, he doesn’t excuse the result. “At the end of the day, I feel like that’s juvenile train of thought,” he said. “Whereas Tessa and Scott can walk into any country in the world and win if they skate the way they need to. That’s what we are trying to turn ourselves into. It doesn’t matter what country we are from. We are there to execute and perform our jobs. Our job is to just be in the moment and do the best that we can do.”