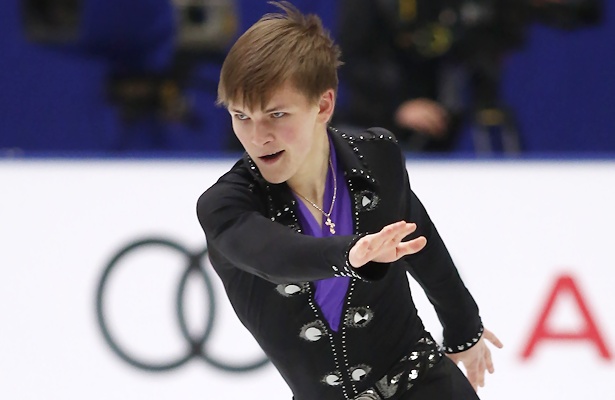 Representing a nation where the ladies have owned the headlines in recent years, Mikhail Kolyada is making a name for himself this fall. The Russian nailed a 279.38 in winning the ISU Grand Prix Audi Cup of China on Saturday, two weeks after posting a bronze at the Rostelecom Cup in Moscow.

“I can’t really believe it, but I am happy,” Kolyada said. “I made some big errors, but they are something I can work on.”

The 22-year-old from St. Petersburg struggled in the beginning of his routine, falling on a quad Lutz and doubling a Salchow. He also popped a triple Axel, but otherwise landed a quad toe and six clean triples. His routine to an Elvis Presley medley also featured strong footwork and spins, and he finished third with 176.25 points.

In winning the short program on Friday, Kolyada recorded a 103.13 to raise his personal best by eight points, set at last year’s World Team Trophy.

“I wasn’t so happy after the short program because everything is decided in the free, so I decided not to let out my emotions,” Kolyada said. “I was very happy with everything I did. I realized that I not only can skate fun programs but great programs.”

Kolyada’s victory silenced the Chinese crowd in favor of Jin Boyang, who secured a silver medal in the event for the third-consecutive year. The 20-year-old Jin is from Harbin, but he trains in Beijing with coaches Zhaoxiao Xu and Caishu Fu. On Saturday, the two-time defending world bronze medalist struggled with his jumps, placing fifth (170.59) in the free skate, but it was good enough to give him a combined 264.48 for second place.

“My performances did not go like in my imagination,” Jin said. “I was not well prepared and familiar with the program because about two weeks ago we changed some of the choreography. I just need some time to train and look at it more.”

American Max Aaron was stellar in winning the free skate with 176.58 points to climb from fifth place and win the bronze medal with a total of 259.69 points. Skating to “The Phantom of the Opera,” Aaron opened with a quad toeloop-double toeloop, and then upgraded a triple Salchow to a quad Salchow. He later hit a quad toeloop and triple Axel-double toeloop combination.

“The event was super strong with plenty of highlights,” Aaron said. “This is my third time in China and both times I was fourth (by narrow margins at the Junior Grand Prix and last year’s Cup of China). The skates were tough, but I enjoyed it. I became a different skater this year training-wise, changing my technique. We’ve modified the technique a bit. I wanted to see what was more comfortable for myself, and going through each technique, there was one that felt right to me, and I am feeling more confident as the season goes by.”

Teammate Vincent Zhou moved up from eighth after the short program to second after his long to “Moulin Rouge.” The skater Zhou underrotated two quads, falling on the Salchow, but mastered three others for the season-high 176.43 points (256.66 total) to finish in fourth place. The reigning world junior champion who was born in San Jose, Calif., is popular in China, and speaks fluent Mandarin.

“There’s definitely a difference,” Zhou said of moving up from juniors to seniors. “Everybody in seniors knows how to carry themselves. Also, the skaters here are a lot older than me. Some of my competitors are 10 years older than me. I just turned 17 a week ago, so there’s definitely a lot of pressure. It’s my first year senior internationally, so because I can do lots of quads, there are high expectations. My opponents can also do quads. I can get the technical scores, but some of my components are not able to compete with them yet.”

Two-time world champion Javier Fernandez admitted he has seen better days. The 26-year-old Spaniard, who trains in Toronto, tripled a planned quad toe in the opening, and then put a hand down on the following quad Salchow. He also missed the second half of two opening jump sequences and fell from bronze medal position to sixth with 253.06 points.

“I wasn’t able to give a great performance, so we’ll wait until the next competition,” Fernandez said.

Fernandez was just off the podium in fourth at the Sochi Olympics and mentioned that his goal for the season was to medal in PyeongChang, adding that it would definitely be his last Olympics. He did leave the door open, however, for additional seasons between now and 2022.

Aaron will be joined with Zhou and Fernandez at the Grand Prix Internationeux de France in Grenoble on November 17. Aaron said his father, who was watching at home in Scottsdale, Ariz., will join his mother in the stands in France, and he was very happy his mother made the trip to China. There will be three American men selected to the Olympic team, tied with Japan for the most athletes allotted. Russia and China have two slots for men’s skaters.

“This sets me up enough to make the Grand Prix final,” Aaron said. “My goal is to get comfortable out there, grab a big score and make a case to be one of the guys who makes the Olympic team.”

Aaron joked that “What’s the worst that could happen?” noting he was the first alternate behind Jeremy Abbott and Jason Brown for the 2014 team.

Jin Boyang will participate in Skate America for the final competition of the Grand Prix series, as will Canadian Kevin Reynolds, who was eighth in Beijing.

“I think from now on I will work on my long program and the details and skate my best performance at Skate America,” Jin said.