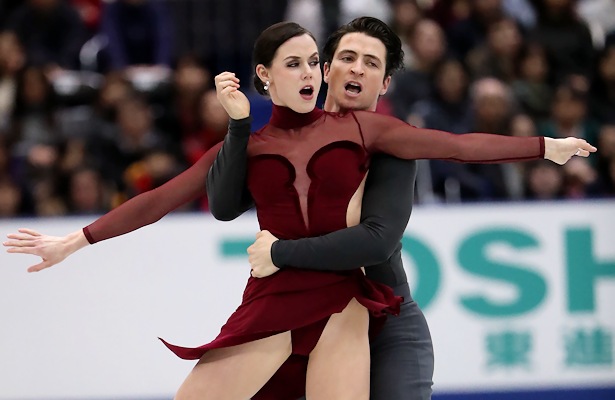 Tessa Virtue and Scott Moir of Canada perform their Free Dance at the 2017 NHK Trophy.

A cut above the rest of the competition, Tessa Virtue and Scott Moir defended their gold medal at the NHK Trophy with a combined 198.64 points on Sunday in Osaka. The Canadian ice dancers have torn through their opponents since returning to competition after a two-year break and have not tasted defeat since winning the silver at the Sochi Olympics.

Virtue and Moir nailed their Short Dance with 80.92 points. “I like the rhumba this year,” Moir said. “It’s a bit of an old school dance, but it’s based on power and speed. I think it’s a good pick for the Olympics. The relationship between the man and woman is what ice dancing is all about. Tessa and I are always excited to do rhumba together.”

In the free skate, the 2010 Olympic champions tallied 117.72 points after showing remarkable lifts, twizzles, and step sequences that garnered many positive GOEs (Grades of Execution).

“This was probably our last NHK Trophy, so it’s special to be here,” Moir said. “For us, we really wanted to come out and glide a bit more. In Skate Canada, we ended up being a little tight compared to how we had been training our programs at home. We accomplished that.”

Their training partners in Montreal, Gabriella Papadakis and Guillaume Cizeron, broke the record at the Cup of China the previous week.

“We’re keeping track of the points,” Moir said. “We’re happy with our product and how we’re progressing, so we’ll go home and figure out how to pick up six more points. Coming out of the gates, this was a personal goal for me because of Skate Canada.”

“We love this program and have an emotional attachment to this Moulin Rouge program,” he continued. “It’s hard with that music, because I’m a hockey player at heart. I want to come out and crush a guy into the boards, and that’s just not figure skating. My partner doesn’t enjoy that. I had to get back into my skates a little more, and I think we did that together.”

The ice dance team added that all roads this season, and since their comeback two years ago, have led to the PyeongChang Olympics.

“In Moulin Rouge, my character dies, so we wanted to portray that tragic heartbreak,” Virtue said. “I think it would be expected for us in an Olympic season to have an Olympic ending, and we wanted to defy that and go a route that is the antithesis. We wanted to find more of a balletic way of approaching that.”

Americans Madison Hubbell and Zachary Donohue won the silver medal to add to their bronze medal from Skate Canada. The 26-year-olds scored 112.04 points and 188.35 in the combined score.

“We felt really good,” said Hubbell. “It’s our first trip to Asia in a while, and that’s always challenging with the travel. Our practices weren’t what they normally are, but we did a good job of re-centering, not letting anything affect us and staying focused.”

Just as Virtue and Moir did, the Americans used Latin music in their short program.

“The middle piece with the lyrics felt very traditional ballroom and Latin, but they incorporated the English lyrics so it’s easier to relate to and stay connected,” Hubbell explained of the short dance. “It’s a collaboration. We wanted something that was like a story, but we ended up choosing this piece when we heard the rhumba section. We love traditional, and we didn’t want to do something too modern. We wanted to show how great ballroom can be on the ice.”

Donohue added he used to teach ballroom and the team has a teacher in Montreal.

“With Latin, there’s a lot of freedom that comes from moving your body and the music can get you carried away,” Donohue said. “So you have to pull yourself in on technical elements a little bit, but besides from that, I think it’s very technically energizing.”

In their free skate, Hubbell and Donohue skated to “Across the Sky” and “Caught in the Rain,” a program with profound serpentine and diagonal steps, plus three powerful lifts.

“I think Zach and I are really natural dancers,” Hubbell added, “and we have a lot of feeling for music together. So when we’re able to stay calm like today, and not have the music overwhelm us, we are able to stay clean and showcase how well we move together.”

For the second-consecutive NHK Trophy, Anna Cappellini and Luca Lanotte of Italy placed in the bronze medal position. The 2014 World champions skated to La vita è bella and was the only team to receive a level four on their diagonal steps. They displayed flawless twizzles and lifts, also graded a level four.

“It’s always an honor to compete,” Cappellini said. “It’s the best crowd to skate in front of in the world. They’re very well educated, and it’s invitational, so whenever we’re selected to skate here, we’re just over the moon because we know it’s going to be an honor because of the ambiance, the people are going to be great, and it will be impeccably organized.”

Her answer was similar to that of ladies’ silver medalist Carolina Kostner, regarding the popularity of figure skating in Italy, and there is hope that the upcoming Milan Worlds will revitalize interest. On her costume, Cappellini added she’s a perfectionist and always imagines what photos she wants to see afterwards.

Victoria Sinitsina and Nikita Katsalapov of Russia were in fourth place with 177.15 points, improving from sixth place at the NHK Trophy a year ago.

“We improved ourselves, but it’s never enough and we will continue to improve ourselves,” said Katsalapov, who won a bronze medal in the Sochi Olympics with Elena Ilinykh. “Not a lot of coaches like to use this music in ice dance, and this was the idea of all of our team. The audience is always great here. This time it was something special from the first day.”

Representing Denmark and coming in fifth were Laurence Fournier Beaudry and Nikolaj Sorensen with 164.60 points.

“All of the improvements we’ve been working on at home sort of happened today,” Sorensen said. “We were struggling with our step sequences earlier in the season, and I think we have it. It was just an overall nice free dance. We’ve been dreaming for a couple of years to come to Japan and skate in the Grand Prix, and we feel very thankful to have the opportunity to skate here.”

Sorensen said they spend only about two weeks during the fall months in Denmark as they train in Montreal. He added that he and Fournier Beaudry are together off the ice, as well, and they generally travel back to Denmark to visit his family or to help conduct clinics with younger skaters about four or five times per year.

“We learned to be completely upside down,” Fournier Beaudry said. “We train in Canada, so it’s a 14-hour time difference. So to wake up at three in the morning and still feel like we can perform is good for us.”

“We need to use these Grand Prixs to sort of rehearse for the big championships like Europeans and Worlds,” Sorensen added. “This was the first chance we got to skate in front of a big arena full of spectators, with a complete panel, and we are using that for our advantage.”

Three ice dance teams from the NHK Trophy will compete at Skate America in two weeks: Cappellini and Lanotte, Kana Muramoto and Chris Reed (Japan, ninth place), plus Sinitsina and Katsalapov. This was the first time since 2000 that no Japanese skaters medaled in any of the four disciplines, and no Japanese ice dance team has ever found the podium at the event.