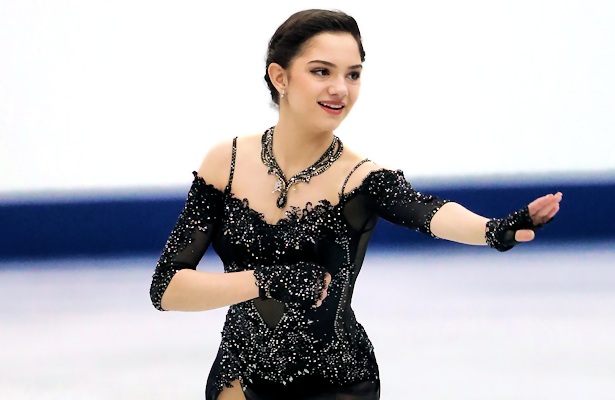 While Russia’s Evgenia Medvedeva wasn’t perfect on Osaka, Japan, her performances were still enough for her to add the 2017 NHK Trophy to her growing collection case, beating Italy’s Carolina Kostner by 12 points. Polina Tsurskaya, Medvedeva’s 16-year-old training partner, won the bronze medal in her senior debut on the Grand Prix.

“I was so blessed to show my performance to people who really love figure skating,” Medvedeva said. “I feel happy to see my fans. I am not satisfied with my free program, but I am glad with what I did in the second half. My main goal for me is always to do my best. When I am finishing my program, I want to feel satisfied with my performance. I did all that I can do for today.”

Medvedeva delivered a solid short program to put her in the lead, but struggled in the beginning of her expressive long program to Anna Karenina, falling on an opening triple flip (meant to be in combination with a triple toe) and stumbling on a triple Lutz. Nevertheless, the teen rallied back, displaying level four spins and footwork, and landed a total of five solid triple jumps and a double Axel-double toe-double toe combination.

“In the short program, I am satisfied with my performance, but I really feel like I can do better,” said Medvedeva, who turns 18 later this month. “I could do a better double Axel for example. My main goal is to show the audience my good performances and to enjoy the free program. The triple-triple combination makes me more confident. It’s really fun, because in practices, you can do what you shouldn’t do in competition. The most important training off the ice for me is ballet because our sport is half sport and art, and we must show our soul in our performance.”

Apart from a fall on a double Axel combination, Kostner was solid in her flowing and graceful routine to L’Après-midi d’un faune, earning the highest program component scores of the evening. The 30-year-old landed a total of five triple jumps and garnered high grades of execution in nearly all elements. The Italian has twice won the NHK Trophy, in 2007 and 2010, and first competed at the event in 2005, when Medvedeva was in kindergarten.

“It was a program where I needed to fight and believe to the end,” Kostner said. “The first element was not easy; I had to really concentrate, and sometimes you can get lost. If you don’t feel perfect, you have to fight. The last couple of years have taught me to fight for what I believe, what I love and what I dream.”

“I am so grateful to share my skating, especially with the people here in Japan,” continued the veteran skater. “It’s so great to share it with people who are so great and knowledgeable about the sport. It’s not the same in my home country, so each time I come to Japan, I try to take a little bit with me of this love of my sport. That gives me a lot of motivation to go out there on the ice and perform my best.”

Kostner wore a black ribbon in honor of two young Italian skaters who were tragically killed in a recent car accident. Although Kostner did not know them personally, she said she was very upset once she heard the news, as the girls shared her passion.

“I wanted them to feel like they had one more skate with me,” Kostner said through emotions.

Tsurskaya earned three new personal best scores in her Grand Prix debut in Osaka. The teen captivated the audience with a solid free skate to music from the Games of Thrones soundtrack which featured seven triple jumps. The skater also showed good ice coverage, displaying strong spins and footwork throughout, finishing second place in the long (140.15) and third (210.19) overall to win the bronze.

“There are more things I need to work on, and I will work on them,” Tsurskaya said. “This is my first senior tournament and there are more spectators who are much more excited, so I can really feel like it. I enjoy everyone’s support. I will begin preparing for Skate America, and I definitely want to achieve better results and a better score in my next tournament. Any time I encounter problems, she (Medvedeva) helps me out. On the ice we are rivals, but off the ice we are friends.”

Mirai Nagasu of the United States was fourth with a season’s best 194.46 points (129.29 in the free skate). The 24-year-old, whose parents are from Japan and addresses the media in their native language, skated a strong routine to Miss Saigon with the exception of a double-footed landing and underrotate triple Axel. She otherwise landed five clean triple jumps and showed good spins.

“Compared to Russia, it was much better,” acknowledged Nagasu, who was ninth in the Moscow event. “There’s room for much to come. I was aggressive. Compared to three years ago, my program is more difficult. When I get nervous, I can’t even breathe, so I take deep breaths because that’s what my coach (Tom Zakrajsek) says. Hopefully, I keep skating better.”

“Going into Nationals, I need to show that I can still do the triple Axel,” added the six-time U.S. national medalist. “If I want to enter a lot more competitions and learn a lot more about myself. I won’t experience this after I stop skating, so what I learn from skating, I want to take with me in my future career. There are still a lot of things I can experience.”

This was the sixth NHK Trophy appearance for the 2008 Junior Grand Prix champion. Her highest finish was a bronze in 2012, and last year she was fifth. Now she will try to take this strong showing and apply it to Nationals, where she was fourth the last two seasons, in hopes of returning to the Olympics, where she was also fourth in 2010.

“Confidence is something we gain in training and every day we practice,” Nagasu said. “If everything were set in stone, I am sure my life would be a lot easier, but it’s not, so I will continue to train hard and do my best. That is all I can ask from myself. Of course, I want to be on the team, whether I have a bad day, my expectation for myself is I try my hardest. I’m really dedicated to my triple Axel and triple-triple and cleaning up all my jumps until I have two clean programs. I can’t wait to continue to progress how I skated today.”

Sixth-place Alena Leonova left the ice in tears following her Bollywood routine that would earn a season-high 127.34 points (190.95 total). Her solid program featured six triple jumps, as well as good spins and footwork. Much like Nagasu, the 26-year-old Russian is seeking an Olympic return for the first time since Vancouver, where she was ninth. Last season, however, she plummeted to 13th in the Russian Championships.

“I went through my own emotions,” the 2012 World silver medalist said. “I gave everything I had and there was an explosion at the end. I performed really well. I thought I would get a higher score in the short program, so I was short of my own expectations. I really wanted to do better than what I expected, and I was able to deliver.”

Mariah Bell, struggled with three of her jumps to place ninth place with 166.04 points.

“It’s not at all what I am capable of,” the 21-year-old said. “I try to think I am mentally prepared, but it didn’t work. I have to definitely keep working harder. I can’t second guess. I was coming off the Cup of Russia, which went really well (sixth place). I’ll keep training for U.S. Nationals. I don’t think I need to keep making changes, I just need to stick to my plan. I know I have a lot of Grand Prix events left in me.”

The U.S. bronze medalist is using the same “Chicago” short program that sent her to Worlds last season.

“I am really enjoying the experience,” Bell said. “I have two other programs choreographed that didn’t quite feel as comfortable as ‘Roxie’ did, so I decided to go back to that.”

Nicole Rajicova of Slovakia came in 10th place with 159.78 points, skating to “Rain, In Your Black Eyes” for her free skate.

“I’m so excited to be back in Japan, it’s always a really good atmosphere,” Rajicova said. “I wish I skated a little bit better, but overall, I am trying to enjoy the experience. I worked really hard for this season. I am doing much better in practices. I was disappointed I fell in the program. I wasn’t expecting that, but it’s still early in the season. There’s so much room to improve, but I think I improved from last year.”

Rajicova will graduate from Fordham University with a degree in finance and math next month. Although she lives and trains in New York City, she visits Slovakia several times a year depending on the competitions. She added she believes the triple-triple combination is her strongest element.

In 12th and last place was South Korea’s Park So-youn (135.79 points). Park competed at the Sochi Olympics, but along with Choi Dabin, would like to be one of the two women to represent her homeland in PyeongChang.

Miyahara had medaled in the past three NHK Trophy events, and this was the first time a Japanese lady was not on the podium since 2000 (Irina Slutskaya was the gold medalist). Miyahara had missed most of the year with an injury since winning the Japanese championship. The 15-year-old Shiraiwa will compete next week at the Internationaux de France. Miyahara, Leonova, Tsurskaya, and Rajicova will head to Lake Placid the following week for Skate America.