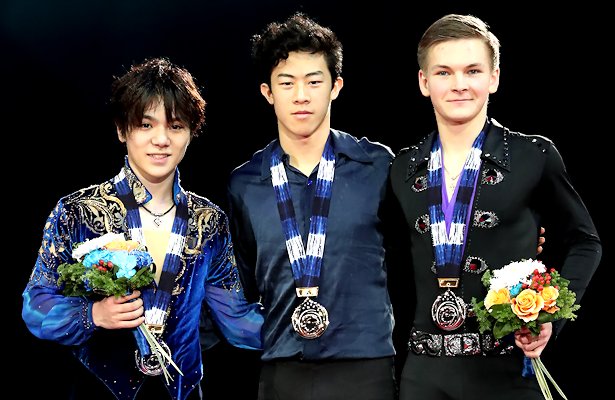 Overnight leader Chen opened his long program with a solid quad Lutz-triple toe, earning 19.90 points right out the gate in his routine to music from Mao’s Last Dancer and “Sacre du Printemps.”

The skater was fortunate enough to have a conversation with Li Cunxin, the dancer that was portrayed in Mao’s Last Dancer, and was able to gain insight on his personality and things that he went through so he could better tell his story through his performance.

“Ultimately, I can’t fit into his shoes,” Chen pointed out, “but I think his story definitely resonates more of my parents. They were immigrants from China to the U.S., and my parents have felt more of the struggles that he had than I had. They worked hard so I can have a great life. Being able to understand his story, read his book, and watch his movie definitely helps me understand his character more and hopefully it shows in my performance.”

The 2017 U.S. champion landed a bit forward on a solo quad Lutz and then doubled a Salchow. He also underrotated a solo quad Lutz and fell on an underrotated quad toe. Despite the mistakes, he otherwise landed a quad toe-loop-double Salchow (meant to be a triple) and finished second with 183.19 points. With a total score of 286.51, he finished in first overall by a mere half a point.

“Not really the performance I was expecting to do here, but I will take it as a good experience and just try to improve from here,” said the 18-year-old. “There were some technical things that I know I can fix and these things I just adjust as the season goes on. Especially the quad toe. I know I was tired toward the end, so I wasn’t able to get the lift that I needed, but the only thing I can do is keep working on it. Now, I just need the rest that I need heading into nationals and focus on doing the best that I can there so that I can secure my spot for the Olympic Games.”

Chen has pushed the technical elements throughout last season, as well as this one, and feels sometimes it has worked and sometimes not.

“I don’t regret trying,” said the 2017 Four Continents Champion. “I believe that is the only way to feel satisfied with what I have done in this sport.”

“In skating, we are doing the same program, same elements throughout the season and we know what to expect,” said Chen on advice for overcoming difficulties. “So, we need to make sure we know what our end goal is and focusing on every little step, little goal that will help you achieve that goal. For me, I know what I want to achieve at nationals and these big competitions, so being able to have that big goal allows me to focus on the little things in practice and when time comes, just to trust all the training and preparation that I have done.”

Uno finished first in the free skate (184.50) and second overall (286.01). The 2017 World silver medalist underrotated and fell on his opening quad loop, but rallied back to land a quad Salchow, triple Axel, quad flip, and quad toe. Unfortunately, he double-footed the landing on a quad toe (meant to be in combination with a double toe) and underrotated the next solo quad toe. The skater otherwise showed good spins and footwork, and earned the highest program components (91.36) of the men in his impressive routine to Turandot.

The 19-year-old said he did not feel nervous going into the free skate.

“The quad toe loop today was the jump my body was not ready for,” explained the Japanese champion. “I was fairly disappointed by that. I was proud of getting both quad Salchow and quad flip done. I just need to work on the toe loop from now on.”

On his development, one of Uno’s goals is to continue to keep pushing and improve himself, but noted that his five components have improved since last year.

Uno was wondering how he would feel competing in in a rink in his home town as it has been awhile. The last time was when he was a junior, but he was met with “warm cheer and support” from the audience.

Kolyada gave up a lot of points early in his “Elvis Presley” routine, falling on his opening quad Lutz and quad Salchow. The 2017 European bronze medalist also stepped out of the landing on a triple Axel and later singled a loop, but managed to land a quad toe-triple toe, as well as four more clean triple jumps.

“If you don’t fall, you don’t learn,” said Kolyada when asked what advice he would give on overcoming difficulties. “Each day you need to try again and make errors, and the most important thing is not to be afraid of them. You always need to set an almost non-achievable goal for yourself and strive towards it to achieve it one day. This is probably all I can say, because everybody has their own life and lives it their own way.”

The 2017 Russian champion was pleased that he was able to rotate all three quads. “The only thing I can myself scold for is the loop. I did a single instead of a triple. I just rushed it. Out of tiredness, maybe I wanted to finish the program faster,” he joked.

Kolyada otherwise displayed strong spins and footwork, all of which received high grades of execution, finishing third in the long and overall (182.78 / 282.00).

“It’s great, a great feeling!” said the 22-year-old of being on the podium. “It is a special feeling I can’t put it into words. This word doesn’t exist yet in the Russian language. Now I am going with a positive feeling into Russian Nationals.”

“I think it was the right decision to let Russian athletes compete,” he said, when asked about the IOC’s decision to suspend the Russian NOC. “Honestly, I can’t imagine the Olympic Games without the participation of the Russian team.

Teammate Sergei Voronov placed fourth (266.59) overall. The veteran skater opened with a solid quad toe-triple toe and triple Axel. The only error in his free skate was a two-footed landing on a solo quad toe. He otherwise landed a total of four clean triple jumps and showed strong level four spins throughout his dramatic and engaging routine to “Sarabande Suite,” earning 178.82 points.

“I felt really great today,” said the Russian skater. “It was such a pleasure to skate here, I really enjoyed it. I was not thinking about anything at all—there were just me, the music and maybe pleasant thoughts about tomorrow. I don’t want to talk about them, it’s just plans to visit some place.”

Vornov doesn’t like the word “if” and is reluctant to talk about qualifying for the Olympics.

“Life always gives you a chance,” he said. “On every competition, you have so many good people around, everybody supports you. I have been skating for so many years that I can say that I live on the ice. If I go to the Olympic Games, I want to show at least the same skating as I showed today which made the audience to stand up.”

When asked about the IOC’s decision to suspend the Russian NOC, the 30-year-old said: “For me, it was not like a day of judgment. I came here to compete, and Olympic Games are in the future, even next year. Let allow new year to come and then we will see. The most important is peace without war. Of course, I feel sorry about this situation, but I didn’t compete in the previous Olympic Games and today this situation is not related to me directly. Although I want to go there for sure, but I try to live in the present.”

“I always enjoy skating,” said the 28-year-old. “Whenever I have the chance to skate in front of the Japanese audience, but I was kind of bad today. I felt like I put on a good performance, but I did some shady things and I paid the price on my scores. Overall, this is the third competition in a row, having only one week in between, and I wanted to show everybody that I’m strong and that I can do it. I did make a few errors here and there, but that’s just because I am tired from the constant traveling.”

Rippon will now prepare for the U.S. Championships and Olympic Games and feels good about it.

“It’s only going to get better,” he said. “It was not a good attempt today (quad Lutz), I’m not known for my quads, so it takes a lot of energy for me to get them all done. I know I can do it, I did a nice one at NHK, so I’m going to keep building up and get ready for U.S. Championships. I can’t go into the rink and jump as many quads as Nathan (Chen), and I know that, so I do my best on everything that I can do every day.”

Teammate Jason Brown fell on an underrotated triple Axel (meant to be in combination with a triple toe) to finish sixth (253.81) overall.

The 22-year-old was a replacement for China’s Boyang Jin who withdrew due to ankle injuries.

“After NHK, my focus was US championships,” said Brown. “I got new skates, getting prepared so I can be in top shape there (US championships). Then, at 2 a.m. on Friday, I was in my bed when I got a text from my coach telling me to pack my bags we leave on Sunday. I was so excited. I have been training my butt off, so this event felt like an extra bonus.”