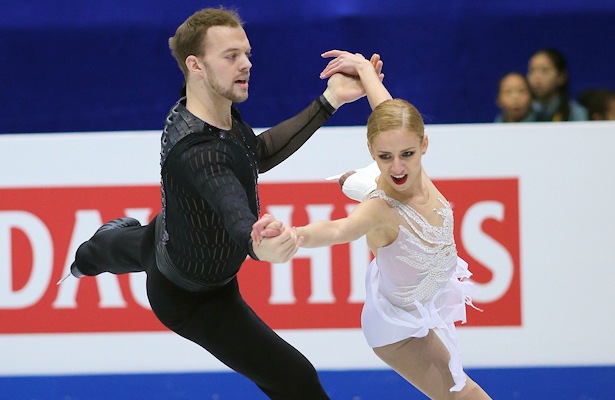 USA’s Tarah Kayne and Danny O’Shea rose from third place to capture the gold at the 2018 Four Continents Figure Skating Championships. Teammates Ashley Cain and Timothy LeDuc earned the silver, improving on their ninth-place finish from last season. The surprise of the day came when Tae Ok Ryom and Ju Sik Kim of North Korea captured the bronze — the first time North Korea has ever medaled at a figure skating ISU Championship event.

Kayne and O’Shea were nearly flawless in their routine to Swan Lake, which featured perfect side-by-side triple Salchows, a throw triple Salchow and a throw triple Lutz. The 2018 U.S. silver medalists also impressed with good level four spins and lifts to earn a new personal best of 128.68 for a first place finish in the long and overall (194.42).

“I feel really great about our performance,” said Kayne. “We got the levels we’ve worked for and it is really exciting for us. I felt fantastic when I came on the ice today. As we are the first alternate for American to Olympics, we will continue training really hard until that time. Then, we will continue our training for the World Championships. It’s busy as usual for us and this is a stepping stone. Next season we will definitely work on a higher technical mark and we are going to start immediately trying other technical things. Hopefully next year we can continue this hard work to get higher scores.”

“I was a little disappointed at my mistake on the Axel,” said O’Shea. “It is disappointing for me because it is a very easy element and I just kind of lost my focus right on the first landing. But everything feels great and I am very happy with the improvements from Nationals to here, and I think we can keep growing as the season continues.”

In their routine to music from The Great Gatsby soundtrack, Cain and LeDuc landed strong side-by-side triple Salchow-double toe-double loops, as well as a throw triple Lutz and throw triple Salchow. The 2018 U.S. pewter medalists also scored a personal best (123.85), however, their total score was not enough to maintain their overnight lead and they slipped to second overall (190.61).

Cain admitted that it was a “fight” and that they knew they couldn’t make any mistakes going into the long program.

“Being on the podium is enough for us, we’re extremely happy,” she said. “I found out yesterday that my grandfather is in the hospital and he might pass away soon. So I felt like today I fought for him, and I skated for him. It wasn’t easy for us, coming in the first place team after the short program in such a huge event. We kept our eyes straight forward for the free skating. We didn’t want to let any distraction come in and affect us.

“It’s been a hard season, and it’s been a lot of learning,” Cain continued. “We’ve really fortunate to be able to train with people like Nina Mozer who’s the top coach in Russia, and she has taught us so much that now we’re ready to apply to the off season. We got a really late start for this season because we competed at the World Team Trophy last year.”

“I think the best thing that we showed for our future career over the next four years, is that we’re fighters and we can trust each other to push under any circumstances,” said LeDuc.

Ryom and Kim showed strong component scores in their routine to “Je suis qu’une chanson,” however, the North Koreans had a fall on the side-by-side double Axels and struggled on a throw triple loop. Nevertheless, their overall score (184.98) was enough to land them on the podium after subpar performances from several other teams.

While the team was happy with their placement, it was a different matter for their performance.

“We didn’t reach the same level as we did as in practices,” said Ryom. “I’m really upset and it’s a pity. What I want to keep working on is to improve my technical level as fast as I can.”

“We are not satisfied at all,” added Kim. “What I want to work on is to perform as well as we did when practicing because we did better in practice. After finishing this competition comes the preparation for the Olympics. I hope we can take the experience this time and perform all the technical elements well in the Olympics. It’s really a pity that we did not do as well as we did when practicing.”

Both Canada’s Liubov Ilyushechkina and Dylan Moscovitch and Australia’s Ekaterina Alexandrovskaya and Harley Windsor struggled with jumps and a lift in their programs. They finished fourth (179.00) and sixth (178.10), respectively.

“We’re definitely capable of doing much more,” Moscovitch. “It’s been a bit of a roller-coaster for us for the last month or so. The nationals and the accident before the nationals. So we’ve been kind of treading water on the middle of the ocean, so we’re just trying to keep our head above water. We haven’t given up, we kept pushing hard, but still disappointed with how everything turned out for us this week. This is our last season.”

“Honestly, it was not a good skate,” said Windsor. “Lots of mistake in the program, so understandable for us to go down, it just wasn’t meant to be for us today. I mean the preparation wasn’t as good as it was for other competitions where we skated well at.”

“Both programs were disappointing for us,” said Stellato. “So we are hoping that this kind of lights the fire in both our bellies to kind of continue training hard in the off-season and take that confidence that we should gather from these six months before we start competing again in the following season.”