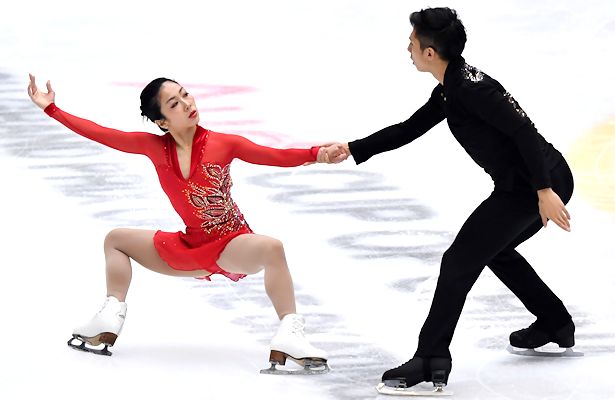 Wenjing Sui and Cong Han of China perform to “Turandot” at 2017 Cup of China.

The choice of music is very cautious thing for every figure skater, and China’s Wenjing Sui and Cong Han is no exception. The reigning world champions of pair skating feel they have chosen their winning Olympic winning program.

“If you want to choose Turandot as your long program, I will be very proud,” Hongbo Zhao, the head coach of the Chinese figure skating team told Sui and Han during their summer camp 2017 in Canada.

“Turandot is an opera of great momentum suitable for an Olympic rink,” Zhao said of the music. “It is also a piece of music figure skaters want to skate to at least once in their skating career. Many famous skaters did their great performance, but I believe Sui and Han will show their own story. It was a very brave choice for them and it is a good one for me.”

No stranger to Turandot, Zhao skated to this music (choreographed by Lea Ann Miller) with his partner and love of his life, Shen Xue, 16 years ago when they captured their first Olympic medal on Salt Lake City ice. Sui, who was seven at the time, was inspired by that performance. She recalls pointing to the television screen telling her mother, “I want to learn ice skating.”

“I was too young to understand their performance, but it was beautiful,” Sui said. Several days later, she put on her first pair of ice skates.

Both Sui and Han realize that  Turandot is much more than a program to their coach. Like British ice dancers Jayne Torvill and Christopher Dean and their renowned “Bolero” routine, Shen and Zhao have set a precedent with Turandot. To this day, the International Skating Union still uses video footage of their 2003 World Championship performance as a demonstration of top-level pair skating.

Sui, 22, and Han, 25, partnered together in 2007 without any previous pairs experience. They graduated from the junior level with three consecutive World Junior titles and competed at both the World and World Junior championships in 2012. They have competed at six World Championships total, winning two silvers (2015 and 2016), and are now the current reigning champions.

Although Sui and Han demonstrated immense talent at a very early stage, like many other athletes, injuries came along with their career. Epiphysitis kept them sidelined from the 2012-13 Grand Prix season., and the following year, they switched from longtime coach Luan Bo to Hongo Zhao, Bing Han, and Bin Yao. The following season, they finished second at Skate Canada, third at NHK Trophy, and third at nationals, failing to qualify for the 2014 Olympics.

“Both of us were inspired by our coach’s Olympic performance,” said Sui. “Skating at the Olympic stage is our dream, but the dream was broken to pieces. We didn’t know what to do at that time. We were practicing at the same rink everyday with our teammates, but they were going to Olympics.  I didn’t know where we should go and what should we do.”

It was hard for the young pair to accept the fact that they could not compete in Sochi.

“If you truly believe in your dream, you shouldn’t waste every minute before you realize it,” said Shen.

Zhao understood the disappointment and confusion all too well based on his experience when he and his partner missed the throw quad Salchow they were relying on at Salt Lake City. It took another eight years for them to realize their Olympic dream.

“I watched that video over and over again those days,” said Sui of Shen and Zhao’s 2002 Olympic performance. “Even though they missed the throw quad-jump, I could read the trust and confidence in Ms. Shen’s eyes when she landed on the ice. She kept smiling and performing. The program maybe was not perfect on the technical level, but it doesn’t matter. The power and love between them is extremely impressive.”

After a long talk between Sui and Han, they managed to make a very strong come-back at the 2014 Four Continents Championships by winning the gold medal and setting a new personal best of 212.40 points. After earning back-to-back Worlds silver medals in 2015 and 2016, Sui made the big decision to undergo surgery to rebuild her lateral collateral ligament in her right ankle and reset the Achilles tendon in her left foot in May 2016.

“She was laying on the bed and pushed into the operation room,” recalled Han. “She tried to make a smile to us, but failed, tears on her face. I could do nothing but comfort her and wait for her outside that door.”

Han said he would never forget the helpless expression of his partner, because in his mind, Sui had never feared anything before.

The operation took four hours, and Sui was bedridden for a month. It would be another two months before Sui could get back on the ice on Aug 12, 2016.

During those days, Han practiced alone or “borrowed” other pair girls from their practices, but he said he had never felt the connection with Sui so strong, even though she was not on the ice. “She would come back. I have never doubted about that.”

The team resumed regular training in December 2016. They progressed so quickly that they were able to deliver two amazing performances (marred only by a fall on the side-by-side triple Salchows in the free skate) at the 2017 Four Continents Championships, renewing their personal best of 225.03 and winning the title for the fourth time.

“I know what I have been through–that’s why I can stand here,” Sui said at Gangneung, the city where they won their second world junior title. “I remember when I was a junior skater; it was like not so far away, but I underwent up and downs. I am still the girl dreaming to be world champion, dreaming to win the Olympic gold medal. If anything changed, I think it is that I enjoy skating much more. I could enjoy the pressure of competing, because when you lay in the bed, you truly miss that feeling.”

With only one international competition win, Sui and Han headed to Helsinki, Finland, as favorites. Again, they struggled on the side-by-side triple Salchows, but otherwise showed high quality skating and became the third Chinese pair team to capture a World title.

“It was a dream come true for us,” Sui had said the press conference. “For years, we kept training and chasing, and the day finally came.”

A week later, renowned choreographer Lori Nichol played Turandot–the Italian opera they knew very well–at a Toronto rink, and persuaded the Chinese pair and their coach to skate to the music.

“I have worked with Sui and Han since 2015,” said Nichol. “I know what music is suitable for them. I know that Shen and Zhao’s program before may be a big challenge, but pair skating has changed a lot over the last decades, and the judging system has changed. I promise, it will be a different Turandot and another masterpiece to be remembered.”

In the debut of their new routine at a national event in September, the team missed their side-by-side triple Salchows, as well as a throw triple flip. Sui cried.

“I have never felt like this,” she said. “I don’t think I have any pressure. It may exist, but I didn’t notice it.”

Leading the Chinese team in preparation for the 2018 Olympics, Hongbo Zhao looked at the mistake in a different light.

“Winning the world title before the Olympic season is a double-edged sword to them,” he said. “They earned the confidence and reputation to be one of the favorites, but on the other hand, they may think too much of that and lose the concentration. This is the early stage of the Olympic season. They still have time to fix their mind to be prepared. I hope they can turn this into a positive light. It is a good warning for them. Situations change all the time during the season, so you can’t take anything for granted.”

“Could we have our own standing ovation by this program?” Cong Han kept asking himself everyday from then on.

The pay off came at both their Grand Prix events at Cup of China and NHK Trophy where they won gold. In Osaka, Japan, they scored 155.10 points with a flawless routine, surpassing the previous ISU highest score of 154.66 points set by Russian pair Tatiana Volosozhar and Maxim Trankov four years ago at Skate America.

“We finally showed our Turandot to the world,” said Han. “It is really a relief for us. For the past months, we trained very hard, even harder than when we won the world title. We tried to learn everything about this opera. We want to show not only a technical element package, but a touching story. A story of us.”

“It is a new expression of the opera,” Sui explained of the program. “My character is more cool and elegant, and emphasizes the power of the love story.”

For perfecting the programs, Nichol flew back and forth between Beijing and Toronto, before leaving Beijing for the last time in November. Nichol told Sui and Han, “I did everything I can do for you. Now it is your turn to realize your dream.”

World-renowned Chinese film director Yimou Zhang (Raise the Red Lantern, Hero, and House of Flying Daggers), who used to direct the stage opera Turandot in 1998 and 2009, came to watch Sui and Han’s practice, and share his opinion with the skaters from a performance aspect. “I don’t know much about figure skating technically, but it has something in common with film. It is a display of beauty. I will try my best to help them.”

Sui finished a 500-hundred paged book about the story of Turandot, a present from Xue Shen.

“At the end of the book, the story does not tell us the princess and the prince live happily together like a fairy tale,” noted Sui. “It ends with a question, ‘What will happen to Turandot and the prince? Who knows?’ I think that is the reflection of true life. If you do not fight to the end, you will never know the result.”

Though the team lost to Germany’s Aliona Savchenko and Bruno Massot at the 2017-18 Grand Prix Final, Sui and Han have not lost their confidence moving forward to the Olympics.

“I made a mistake in short program,” said Han. “It was a fatal one, but it was not the end of the world. We will keep going on the route mapped by our coach.”

Turandot earned Shen and Zhao applause and reputation 16 years ago, and the only regretful thing was that it did not bring them an Olympic medal. In Pyeongchang, Sui and Han hope to get a chance to make that up.

“I want a gold medal,” said Sui, “and I want to deliver two programs that deserve the gold. Train hard, trust your partner and team, enjoy every moment on the ice, and everything will be paid off. That is my belief.”