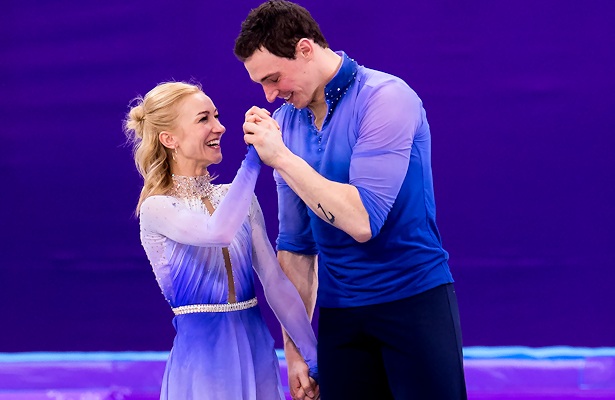 Aljona Savchenko and Bruno Massot of Germany share a moment on top of the 2018 Olympic Pairs’ Figure Skating podium.

In a what was a tense and exciting competition, Germany’s Aljona Savchenko and Bruno Massot rose from fourth place after the Short Program to capture the 2018 Olympic gold in the Pairs Figure Skating event on Thursday. Wenjing Sui and Cong Han of China slipped to second to settle for silver, while Canada’s Meagan Duhamel and Eric Radford maintained third place overall for the bronze.

Savchenko and Massot, who skated first in the final warm-up group, delivered a perfect routine to “La Terre vue du ciel,” which opened with a level 4 triple twist that came complete with +3 grades of execution (GOE) across the board. The team went on to land a throw triple flip, side-by-side triple Salchow-double toe-double toes and triple toes, a throw triple Salchow, and level 4 lifts and spins. They broke their own record for the highest Free Skate score (2017-18 Grand Prix Final) with 159.31 points. With a total score of 235.90, the Germans took first overall by a mere 0.53 point.

“Today I wrote history,” said Savchenko of winning the gold at her fifth Olympics. “This is what counts. I was positive after yesterday. I said to Bruno, we will write history today. And then everything happened as I had imagined it and it came true. It is my moment. We celebrated new year together and we said 2018 will be our year and it became our year.”

“Yesterday it was a difficult day for me,” Massot confessed, “but today when I woke up, I felt good. The practice was good and when we went out, we felt like ‘now it’s your time to fight.’ I got the gold medal in my head. Yesterday I said I don’t want her (Savchenko) to come back with another bronze medal. She deserved this gold medal. We were on the ice for the gold medal and we didn’t give up. We were ready for this competition and we proved that we are ready.”

Overnight leaders Sui and Han showed a quad twist but then Han popped the second jump in a triple toe-double toe-double toe and Sui stepped out and put a hand down on the next element, the side-by-side triple Salchows. While the team from Harbin made no more mistakes, the errors were still costly. However, their emotional routine to “Turandot” featured two clean triple throws, level 4 spins, and difficult lifts, all of which garnered no less than +2 GOES. They earned 153.08 points for third place in the free skate and finished second overall with a personal best total of 235.47.

“I was quite nervous, this being my first Olympic Games,” admitted Sui. “We really wanted to do well, but simply fell too short in the end. But I hope that this will give us the motivation we need over the next four years to do well again at the Beijing 2022 Games.”

“We feel very blessed,” said Han. “To get this result makes us happy. Even though we didn’t do well in the long program, I think we will be in China at the next Olympic Games to do our best. As an athlete from China, to stand here and fight for our dreams is already an immense honor. The results weren’t very great, but we should have no regrets. We will continue to strive and fight.”

Sui, who opted out of taking medication for pain, feels that the Olympics are an “incomparable experience.”

“It’s something we have to manage every day,” said Han. “On a scale of one to 10, the pain is probably at a seven or eight. We’ve stopped doing some of the harder moves in training and only did simple moves in practice this morning.”

Apart from a hand down on the side-by-side triple Lutzes, Duhamel and Radford were clean, showcasing a solid throw quad Salchow and throw triple Lutz, as well as side-by-side triple toe-double toe-double toes. The team also impressed with level 4 lifts and spins to earn 153.33 for a second-place finish for their “Hometown Glory” free skate. With 230.15 points, they maintained third place overall.

“I had a little bit of a mishap on the Lutz, but the quad throw was going so well in training,” said Duhamel. “I didn’t even question it and I said, ‘No, you are landing this.’ I wasn’t surprised. I said, ‘Now I have to go on to the next thing.'”

“We were really, really well trained when we came here,” said Duhamel of on skating four programs this week and taking the bronze. “I think we are at the peak of our mental and physical state right now as the elderly skaters. I don’t think we could be any more prepared. Those four programs this week are exactly along the lines of what we do in training every week. I think we paced our energy very well throughout the week so that we had enough in the tank to give it everything we had today.”

Duhamel was unaware that a throw quad had never been landed at the Olympics, that is, until she got a message from Isabelle Brasseur (CAN, 1992 and 1994 Olympic pairs bronze medalist).

“This is better that anything we could have imagined,” said Radford of winning the bronze. “This competition, there were so many good pairs that anything could have happened. So for us to go out and lay it down, it meant so much to us.”

“That was a better way to end, with an awesome long program,” he added of their upcoming retirement. “A bronze medal is more than I could ever have hoped for. Meagan and I, our lives are intertwined and they will be for the rest of time. We’re definitely keeping our foot in the door when it comes to skating and we look forward to doing tours and shows. We just feel fortunate that we’ll have these incredible memories for the rest of our lives.”

“I feel so settled when I think about everything we’ve done in the last eight years together as a team,” said Duhamel. “We did everything and more that we could possibly have dreamed of. Everything feels so complete, I feel so complete right now that I can just be happy for the rest of my life. We both look forward to staying in skating and doing other things, but we will keep this feeling of the four performances that we did here as the lasting impression of our skating careers. I think we can thank all our achievements here to our struggles because that’s what defined us and made us who we are today.”

Evgenia Tarasova and Vladimir Morozov (OAR) stood in second after the short, but finished fourth in the long (143.25) and overall (224.93). The team from Moscow also executed a quad twist and showed a strong triple loop, along with strong lifts and spins, however, they doubled their side-by-side triple Salchows and Tarasova went down on the throw triple Salchow.

“We are obviously upset,” said Morozov. “We had a chance, a good chance, but we did what we did. It was not enough what we did. We have worked a lot and hard, but we were not able to skate better. The jump and the throw did not work out at the beginning, nerves probably showed. We pulled ourselves together and did the remaining elements well, but we did not get high enough scores as the others had skated clean more or less. We fought until the very end. We did not pay attention to the scores of the others, we focused on our performance. The judging was fair, you got the scores you deserved for your performance.”

“It is difficult to pull yourself together when success is so close but in fact we were focused,” he said, regarding being second going into the free skate. “It was a bit hard emotionally, we were a bit worn out after the team competition, but this is not the main reason. The mistakes came in the beginning. That means physically we were strong enough for the rest of the program and skated well, but it did not work out today.”

“It wasn’t the perfect program that we wanted to do, but we fought from beginning to end,” said James. “With the almost-fall on the quad it wasn’t easy. Concentrating hard until the flip and attacking the program I am very proud. Even with the Salchow, we wouldn’t have been on the podium because we had some great skates out there today. To start the program strong and finish strong like that I am very, very happy.”

“I am happy how we fought out there today,” added Cipres. “That’s what the Olympics Games are. Everybody tries their best and this competition which started yesterday with the short program was already amazing, and today it was incredible with the level of skating. I’m pretty proud of us and this is the best result at the Olympics. I am very happy about this. We didn’t get a medal, but we still have time to do it (in our careers). Last year, we were so far away from this opportunity. I am really happy about how we skated today and yesterday.”

Italy’s Valentina Marchei and Ondrej Hotarek scored a personal best for sixth place in the free skate (142.09) and overall (216.59). Their routine to “Amarcord” featured a triple twist, solid side-by-side triple toes and triple Salchow-double toe-double toes, and a throw triple loop and Lutz.

“It’s great,” said Hotarek. “It was hard for us to face this event. Everybody skated so good today and we had a great free skate. It actually worked even better today. I actually experienced different emotions throughout the program, but it really worked in our favor. We are really happy.”

Natalia Zabiiako and Alexander Enbert (OAR) under-rotated their triple Salchows but were otherwise clean in their “Sleeping Beauty” free skate. They earned a personal best of 138.53 for seventh place in the free skate and overall (212.88).

Xiaoyu Yu and Hao Zhang of China slipped from fifth to eighth (204.10) overall.

“I wasn’t as nervous as I was yesterday, but maybe I just wasn’t strong enough,” said Yu of their performance. “After the first fall, I was really affected mentally, and although we tried to make up for it later on, I didn’t have enough strength to carry it through. Perhaps that’s why we made this many mistakes. This was a very precious learning experience.”

“Everything was actually quite routine today, and practice in the morning went well too,” said Zhang. “To make this many mistakes in a free skate is quite out of the ordinary for us. I would say it’s possibly nerves, given that this is Xiaoyu’s first Olympics. It’s inevitable to have some nerves. We still have a shot at the World Championships. We’ll try again there.”

“I’ve been to more than 10 world championships and this is my fifth Olympic Games,” said Zhang when asked about pressure. “I have a lot of experience from all that competing, but this is Xiaoyu’s first. There is a learning process to all this. If we succeed, we succeed. If we fail that’s also OK. (But) there are bound to be some regrets not to have continued on from a good performance in the short program. We will definitely feel a little low now, but as athletes we must know how to recover, be it from success or from failure.”

“Unfortunately, too many mistakes today,” Scimeca-Knierim said. “It was one of our lowest scores. I was sick last night and this morning with a normal stomach bug. I had asked Chris to kind of pick up the slack for me today because I knew I was going to be more fatigued, but then my adrenaline kicked in and I rose to the occasion. I think his fatigue might have set in because he was concerned for me.”