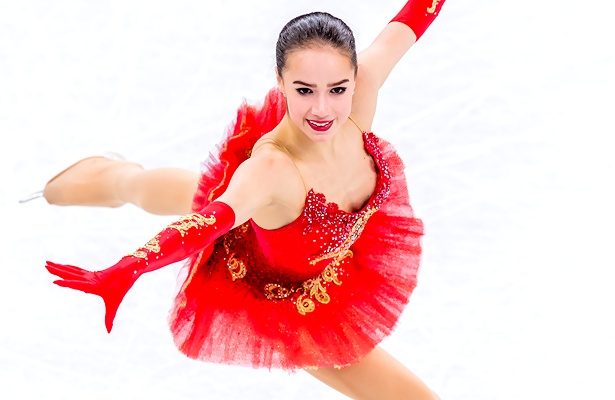 The Figure Skating event at the 2018 Winter Olympics concluded with the Ladies Free Skate on Friday at the Gangneung Ice Arena in Pyeongchang. Alina Zagitova (OAR) edged out teammate Evgenia Medvedva to win Olympic gold, while Kaetlyn Osmond of Canada won the bronze in what turned out to be an exciting and nail-biting event.

Zagitova, the leader after the short program, admitted to being nervous going into the free skate.

“I was more calm in the short program because I understood I had no room for error and I have to skate clean,” she explained. “There was a lot of pressure on me and Zhenia (Medvedeva). All fans were waiting for us athletes from Russia to be on top.”

The skater, who has been undefeated in all events this season, left off a triple loop on her opening triple Lutz combination, but tacked in on to another triple Lutz later in the program.

“We discussed this with my coach, so in case the first combination doesn’t work out, I will do the second Lutz with the loop,” explained Zagitova. “Honestly, I was in shock, because I was ready to (do) everything on the first try. But this can happen. Each athlete has to deal with it and it is another experience that I went through.”

In all, she landed a total of seven clean triple jumps, earning high grades of execution (GOE) on all elements, including her level 4 spins and footwork. The 2018 European champion earned 156.65 for her brilliant skate to Don Quixote.

“I won!” said the 15-year-old who earned a total of 239.57 points. “Honestly, my hands are shaking, because I haven’t understood yet that I am an Olympic champion. When I saw the score, I was surprised and it was a nice surprise. I am glad that I was able to deal with my nervousness, go out there and skate my program calmly.”

The young skater, who trains under Eteri Tutberidze and Sergei Dudakov, was glad to be able to show what she had worked on.

“I didn’t feel the competition,” she said of her performance, “but that I don’t have any room for errors. “That was a motivation and anxiety at the same time. My hands were shaking, but my body remembered what I’ve been doing many times in practice.”

Medvedeva, who was in a close second after the Short Program, finished first (156.65) after a phenomenal Free Skate to music from Anna Karenina.

“I felt today in my program really like Anna Karenina in the movie,” she said. “I put everything out there that I had, I left everything on the ice. I have no regrets.”

The two-time World champion landed all seven triple jumps cleanly but didn’t have the triple Lutz-triple loop in her arsenal as Zagitova did. However, she made up for it in the program component scores with her artistry and expression, earning many positive GOEs as well as level 4s for her elements. Her total score was 238.26, a mere 1.31 points behind her teammate.

“This was my mindset going out—not to leave anything on the table,” said the 18-year-old. “I didn’t think about errors, not about a clean skate. Honestly, I skated like in a fog, for the first time. It is because I realize that I am enjoying the process. These four minutes are historical and they only belong to me and the whole world is watching only me for those four minutes.”

“My soul thrives on that feeling, the body and the brain did their job,” she added. “This will remain forever in my memory, because I gave it my all.”

The skater felt that the stress fracture earlier this season did have an impact in that it took away two months of practice and preparation time.

“I didn’t go out on the ice, I didn’t skate for a few weeks again,” Medvedeva explained. “This did leave a trace, but I don’t connect that in any way to today’s performance and result.”

“I want to understand what is going on, as always I don’t realize right away what just happened,” she said regarding her future. “I need to recover, then I’ll continue to live and enjoy what I love most.”

Apart from an edge call on a triple Lutz, Kaetlyn Osmond of Canada pulled it together, selling her brilliant routine to Swan Lake.

“I was so excited, I was so ready for this program,” said the current World silver medalist. “All day I was terrified, I was so nervous, but it is a program I feel super comfortable with in practice and I was so ready to show it in competition, that’s exactly what I felt.”

Osmond earned positive GOEs on the remaining six jumps, as well as on her level four footwork and spins. She scored 152.15 for a third-place finish in the free skate and overall (231.02) to win the bronze.

“Not long after the last Olympics, I didn’t even know that I would be competing at this one,” she said, regarding the 2014 Olympics. “It means so much, and to know that I fought so hard in the last four years. My main goal was to place higher than 13th, which I did, and I improved that by 10 placements. I am so excited!”

“I was so confident and so ready to go into this event,” the 22-year-old added. “I felt strong and in the best shape I have ever been in my entire life. To be able to put out two clean programs on Olympic ice—it means so much to me!”

When comparing the difference of her skating to that of four years ago, the Canadian feels she has definitely improved a lot in terms of maturity.

“My presence on the ice, I don’t feel as young, and bring a different side to my skating and I feel so much in control and that is something I lacked at 18,” she said. “I feel a lot stronger overall.”

Japan’s Satoko Miyahara earned a new personal best of 146.44 for her lyrical routine to Madame Butterfly. The 19-year-old was clean, landing all seven triple jumps and showing strong spins and footwork throughout.

“Being here is glorious enough and I’m very happy, whatever the result,” said the four-time Japanese champion. “Standing on the Olympic (ice), I wanted to devote every effort to what I’ve worked towards for four years. It was beyond imagination. I fully enjoyed my performance and being able to reflect myself. It was a priceless moment.”

Carolina Kostner of Italy displayed elegance as always, but fought for the landings of several of her jumps, stepping out of a triple flip and later, under-rotating a combination jump. She placed fifth (139.29) in the free skate and overall (212.44).

“The big difference is that I truly enjoyed it,” said the 31-year-old of her fourth Olympics. “I know that I have gone such a long way since the first Olympic Games. The goal was to live it in a positive way and it was all the way through. It wasn’t always straight ahead, it was a bit bumpy, but that’s what sport is all about. It’s about standing back up when you fall and always look ahead. That’s what I did, I am truly amazed of the experience. I am really, really proud that I pushed through. I hope that this can be help and (be an) inspiration for others that struggle, that look for some inspiration. For me it was totally worth it and I am so happy.”

“I am so amazed and so happy of a true Olympic experience,” she added. “Two years ago I started from zero. I was hoping to be here and now I am here among the best skaters in the world, the best ladies. Being part of such high level figure skating and competitive ladies (single event) is truly amazing. It was absolutely an amazing Olympic experience. I go away with a huge smile and a heart full of warmth, love and kindness.”

Japan’s Kaori Sakamoto delivered a refreshing routine to music from Amélie, opening with a triple flip-triple toe and displaying strong spins and footwork throughout. However, the skater received an edge call on a triple Lutz and stepped out of a triple loop near the end of her program. The 2018 Four Continents champion finished sixth (136.53) in the free skate and overall (209.71).

Dabin Choi of South Korea delighted the crowd after a poignant routine to music from Doctor Zhivago which was highlighted by a triple Lutz-triple toe-double toe and level four spins. She fought for every element, earning a personal best of 131.49 for eighth place in the free skate and seventh overall (199.26).

Maria Sotskova (OAR) was solid in her routine to “Claire de Lune,” which featured seven triple jumps, including a triple Lutz-toe. She finished seventh in the free skate (134.24) and moved up from 12th to eighth place overall (198.10).

The skater, who was fourth at the 2010 Games, said it clearly wasn’t program that she came here to do, and that’s it been a long three weeks.

“I kept my (bronze) medal (from the team event) with me this whole time,” she said of her Olympic experience. “We earned this and our team was in jeopardy and I went out there and delivered. I am so, so mentally drained and exhausted. But this is what I came here to do. I delivered when it counted for me and really felt like I skated for the team. I haven’t stopped crying since. I set out to win a medal and I did it. It’s been a long time coming and eight years later I am taking a medal home.”

“I thought of today as my ‘Dancing with the Stars’ audition,” said the 24-year-old. “That’s what Adam Rippon told me to do. So I tried to smile as much as I could even though I popped the triple Axel. I wouldn’t want to do it again for any reason because I did my one triple Axel (in the team event) and I am taking that title from Tonya (Harding).

Teammate Bradie Tennell finished ninth overall (192.35). The 2018 U.S. champion landed a triple Lutz-triple toe, but later under-rotated the back half of a double Axel-triple toe, as well as a triple Lutz.

“Today was OK,” Tennell said. “Obviously it wasn’t the way I wanted to skate. It wasn’t that perfect Olympic program, but I’m really happy for getting out there and holding myself together. I’m pretty hungry and really tired, but I’m proud of myself.”

Canada’s Gabrielle Daleman, who stood in seventh after the short, slipped to 15th overall after struggling and falling on several jumps.

“I’m heartbroken, to be honest,” said the 2017 World bronze medalist. “That’s not me, that’s not how I skate. I’ve been very strong and very consistent, but it’s sport. You have good days and you have bad days, and unfortunately today wasn’t my day. I don’t know if it was nerves or pressure that got to me, but at the end of the day, I’m human and today was not my day.”