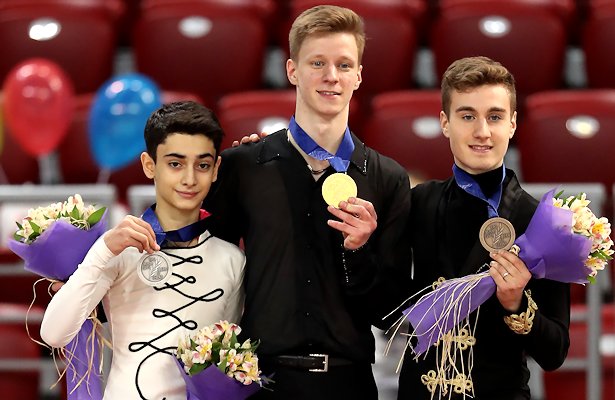 Russia’s Alexey Erokhov won the gold in the Men’s event at the 2018 World Junior Figure Skating Championships on Saturday in Sofia, Bulgaria. Teammate Artur Danielian rose from eighth place to capture the silver, while Matteo Rizzo of Italy won the bronze.

USA’s Alexei Krasnozhon was in first place after the short program, however, the 17-year-old injured his right ankle after falling on his opening quad Salchow attempt and withdrew from the event.

Erokhov, who was just over four points behind Krasnozhon after the short program, was focused on winning going into the free skate, but was very upset that Krasnozhon had to withdraw.

“I wish him a quick recovery,” he said of his teammate, “but that is the sport and it can happen. I was in a fighting mood, but then I got nervous when I realized that Lesha (Krasnozhon) was going to withdraw. I didn’t know what had happened and when I had to go out to skate, I tried to shut everything out.”

The victory meant a lot for the 2018 Russian junior champion as he had set a goal for himself to move up to the senior level next season.

“I am really happy about this win,” said the skater, who is coached by Eteri Tutberidze and Sergei Dudakov. “I’ll try to go on and to take first places. To be honest, the performance was not the best. There were many mistakes.”

Erokhov, who feels the medal is a small step in his career, said “You just need to do your job,” when asked what can be expected of the Russian men. “Right now nobody (in the Men’s) in Russia shows consistent skating. I think that our senior guys are competitive, but they are not consistent enough.”

Danielian surprised in his solid free skate to music from Notre Dame de Paris, landing a total of eight triple jumps, including two triple Axels. The 2018 Russian junior bronze medalist, who stood in eighth after the short, also earned a level 4 on all spins to earn a new personal best of 149.61. With a total score of 218.76, the skater from Moscow catapulted from eighth to second overall.

“For me this second place is very unexpected,” said the 14-year-old. “I came here to skate clean and to show what we’ve worked on this season, show consistent skating and to make the people that work with me happy. This second place is a motivation for me to continue to work, learn quads and be competitive. I want to skate well in the Junior Grand Prix, get to the Junior Grand Prix Final and come back to Junior Worlds.”

Rizzo, finished sixth in both the short and long (141.34) program, but with a total score of 211.58, edged out Canada’s Joseph Phan for third place overall (211.58). The 2018 Italian champion doubled two jumps, but otherwise had a solid skate which featured two triple Axels.

The 19-year-old was happy with his placement, but did not feel it was the best way earn his first medal, citing Krasnozhon as a friend.

“It was really unexpected and I wish him a fast recovery,” said the skater from Sesto San Giovanni, “but I’m really, really happy. This medal means a lot to me and for my team. It is my last junior competition, it’s my last junior year. I competed in the Olympic Games and it was amazing, but this (medal) is a big step to be in at a good level in the seniors.”

Rizzo, recalling his 30th placement at his debut at senior worlds last year, feels that he’s proof that anyone can be successful if they “believe in themselves and keep working.”

“I think my work was very good this season,” he said of his progress. “I did a lot of competitions. My team has been working well and I’ve been working well and this was the result. I think I’m not lucky, I just worked. Yes, Alexei (Krasnozhon) got injured and I’m very sorry for him, but that is the competition and anything can happen. I worked hard for the Olympic Games, that was my first goal and winning a medal here was my second goal. All achieved, but it was work, not luck.”

Phan had a dismal place short program (14th), but managed to finish third (145.65) in his free skate despite several errors in his routine to The Godfather, earning 210.91 overall for a close fourth-place finish.