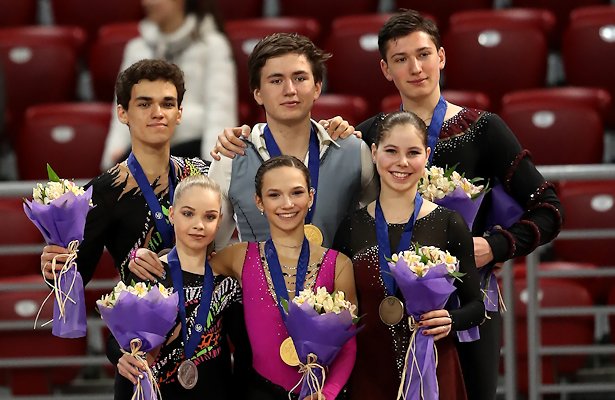 Overnight leaders Pavliuchenko and Khodykin skated to a personal best in their Short Program to music from Cloud Atlas yesterday, which featured the only level 4 triple twist. In their Free Skate to music from Chicago, the 2018 Russian junior champions had a touch-down on the landing of their side-by-side triple toe-triple toe combo, but showed a strong level 4 triple twist, throw triple flip and loop, as well as side-by-side triple Salchows. The team earned also earned a level 4 on all lifts and two of their spins to earn a new personal best of 117.41 for first place and overall (180.53).

“We are pleased with the result,” said 18-year-old Khodykin. “There were still some minor mistakes, probably because of nerves and stress—it was the (Junior) World Championship after all—but overall, we are happy with our performance. For the future, we want to perfect what we have and maybe learn new elements. We’ll decide about that with our coaching team. That could be jumps or pair elements.”

“We work hard every day and that’s why we are strong,” said Pavliuchenko, regarding Russian pairs, “but we have a few mistakes.”

“I really liked how Aljona Savchenko skated and I am very glad that she finally earned her Olympic gold,” she said. “I also want to say to those for whom it didn’t work out—continue to work and it will all happen. When watching Aljona, I thought that this is the perfection that I want to strive for. Also it shows that you should never give up and continue to work, no matter what.”

Kostiukovich and Ialin also had a personal best (61.77) in their Short Program to “Malagueña,” and their plan was to pull themselves together and continue “in the same spirit” for their Free Skate to selections from Cirque du Soleil. However, the team, who is coached by Vasili Velikov, struggled, receiving a three-point deduction for falls on their side-by-side jumps and throw triple Salchow. However, the team executed a quad twist and a solid throw triple loop, earning a new personal best (106.22) for third place. With a total score of 167.99, the team from Moscow managed to hold onto second overall.

“We are happy about the result, but there were quite a few errors and falls in the program,” Kostiukovich noted. “We prepared very well, but the last starting number affected us. We’ll continue to work to make sure that doesn’t happen again.”

Ialin feels that Russian pair skating has always been strong and acknowledges that it takes a lot of work and “huge desire to be the leader that allows Russia to be on top.”

“There are a lot of strong pairs and there is really a lot of room to grow for us,” said the 19-year-old, adding that it is yet to be decided on whether they will move up to the senior level next season.

Mishina and Galliamov, who stood in fourth after the short, earned a new personal best of 110.29 for their routine to music from 1492: Conquest of Paradise, finishing second in the Free Skate and third overall (167.24). The 2018 Russian Junior silver medalists under-rotated their side-by-side triple Salchows, but were otherwise clean, landing a throw triple loop and Salchow, as well as a side-by-side triple toe-double toe-double toe combo. The team from St. Petersburg also earned a level 4 on all their lifts and spins.

“We are happy to be here,” said Mishina. “It is not easy to get selected in Russia for the World Championships because we are skating in our first season together. It was not our best performance— we can skate without mistakes.”

“For next season, we’d like to improve our whole program, but we’ll work on perfecting the lifts, the skating skills, choreography and jumps,” said Galliamov, adding that they are undecided about whether they will stay juniors. “Taking part in senior Nationals doesn’t yet mean that we’ll move up to the senior level. We haven’t really thought about it yet. Maybe we’ll stay in juniors.”

Yumeng Gao and Zhong Xie of China, who stood in third after the Short Program, had the second highest program component score in their fifth-place finish Free Skate to music from The Twilight Saga: Breaking Dawn. However, the team from Beijing under-rotated their side-by-side triple Salchows and slipped from third to fourth overall (164.70).