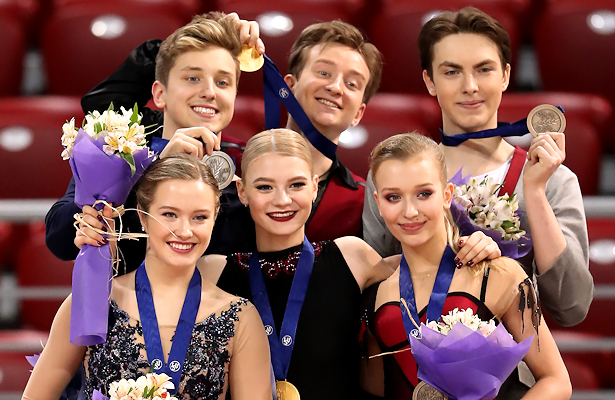 Anastasia Skoptcova and Kirill Aleshin of Russia took the gold in Ice Dance at the 2018 World Junior Figure Skating Championships on Friday in Sofia, Bulgaria. USA’s Christina Carreira and Anthony Ponomarenko rose from sixth place to capture the silver, while Russia’s Arina Ushakova and Maxim Nekrasov maintained third overall to win the bronze.

Skoptcova and Aleshin were pleased with their Short Dance in which they earned a new personal best (66.44), and felt it was one of the best, if not “the” best, one of the season. Going into the Free Dance, they had no expectations other than to show what they had been training.

The 2018 Russian junior champions danced a solid tango which featured strong level 4 twizzles and lifts. The team earned many positive grades of execution (GOE) to score 88.71 for a first place finish in the Free Dance and overall (155.15).

“Our performance today I rate nine on a scale of ten,” said Aleshin. “I could have done better in some places, but I am sure that Nastia did everything she could have done. Obviously, we’re very happy about the victory. This victory means motivation for us to continue to work at the senior level.”

Last year, the team, who is coached by Svetlana Alexeeva, Elena Kustarova, and Olga Riabinina, were fifth despite skating two solid programs.

“Maybe there were some little errors, but that was last year,” Aleshin offered. “This year we’ve improved and fixed everything that we didn’t do last year.”

Skoptcova, 17, and Aleshin, 20, plan to move up to the senior level for both national and international competitions next season.

Skating to music from the W.E. soundtrack, Carreira and Ponomarenko showed good level 3 circular steps, as well as level 4 lifts and twizzles. The 2017-18 Junior Grand Prix Final silver medalists earned 86.83 for a second-place finish in the Free Dance, and with a total score of 147.68, edged out Ushakova and Nekrasov for second overall.

The 17-year-olds were disappointed with their sixth-place short dance in which Ponomarenko stepped out of a twizzle.

“After the short dance, after the mistake, she (his mother, 1992 Olympic Ice Dance Champion Marina Klimova) was like, ‘Anthony, it’s okay, I still love you,'” said Ponomarenko. “Actually, she really motivated me. She told me, ‘you’ve been a fighter since the beginning, so just give all in the free dance.”

“We wanted to come here and deliver two strong performances and that’s not what happened, but we came back strong I think,” said Carreira. “Today, we still had a few technical mistakes, but overall, it was much better.”

The team was happy with their bronze medal from last year as it wasn’t expected. “This season we’ve been working really hard, so it’s an extra reward to get a medal and we’re very proud of it,” said Carreira.

Their future  plans are to work towards the Olympics, but the goal for next season is to continue to put out clean performances.

“We haven’t really decided if we’re doing senior yet,” said Ponomarenko. “That is something we need to talk with our coaches about.”

Ushakova, 15, and Nekrasov, 17, placed third in the Free Dance after their performance to “Be Italian” with 85.59 points. The Russian junior bronze medalists delivered strong lifts, and earned the most GOEs with their level 4 twizzles of the entire group. They scored 146.88 overall to maintain third place in their debut at this event.

“We are very happy to have won this medal,” said Ushakova. “At the beginning of the season, I said in an interview that we have big plans for this year and we realized them.”

The team from Odintsovo will be competing at the junior level next season in order to improve.

“We’re very excited about the medal and now we know what to strive for,” said Ushakova.

Lajoie and Lagha, slipped from second to fourth overall (146.22) after placing fifth (83.83) with their routine to “Dream” and “Nemesis.” The two-time Canadian junior champions displayed strong level 4 lifts and twizzles, but their circulars steps received a level 2.