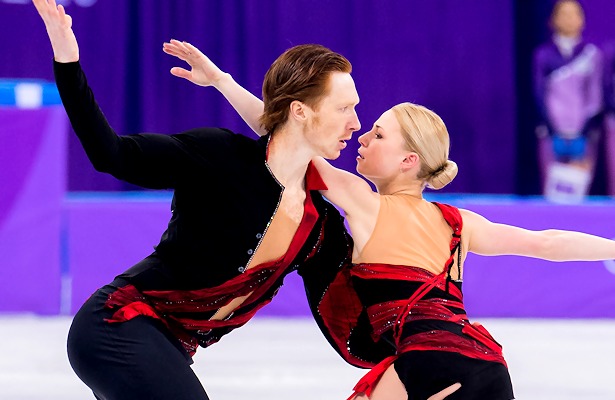 In a country where pairs figure skating is a very prestigious discipline, Russia’s Evgenia Tarasova and Vladimir Morozov are considered the number one team. They are currently the number one in Europe and aim at becoming number one in the world this upcoming season. Following the Olympic season, the team from Moscow changed coaches in the pursuit of that goal and are now working mainly with 2014 Olympic Pairs Champion Maxim Trankov.

Tarasova and Morozov would have been very happy with the past season, which brought them their second consecutive European title and the silver medal at Worlds, if it wasn’t for the disappointment from the 2018 Olympic Games where they came in fourth following an error-ridden free skate.

“The experience (of the past season) was taking part in the biggest competitions and that you always have to present yourself from the best side,” said Morozov. “Some things worked out, some didn’t. Obviously, the Olympic Games didn’t go too well for us, but Europeans were not bad, we won, and coming second at Worlds is also a very good position. Now we’ll have four years to redeem ourselves (at the Olympic Games).”

“For me, it probably was very important to skate well at Worlds after the Olympic Games,” added Tarasova. “Not to prove that it (skating poorly in PyeongChang) was a fluke, but probably to redeem myself bit. After the Games, I wasn’t in a good mood almost all the time. I was very upset. We prepared for the World Championships, we skated and I was able to exhale (relax) a bit. I can’t say that I was overly happy, but we finished the season on a good note.”

Following the World Championships, the skaters took a break and Tarasova underwent surgery on her nose that had been broken in her youth. The nose was corrected to make it easier for her to breathe, but the recovery took quite long and she wasn’t able to return to full-fledged practices until earlier this summer.

The coaching change became official in May. Nina Mozer, the head coach of the pair skating school where Tarasova and Morozov have been training since teaming up in 2012, decided to take half a year off. The skaters, that had also been coached by Andrei Hekalo and Robin Szolkowy, decided to turn to Maxim Trankov for help.

“It was our choice,” said Morozov, 25. “We think that Maxim can give us what we need and what we want. We see prospects with him. He can give us what we are lacking for our progress. We need more creativity and ideas in the programs, some nuances in the relationship between the partners. He inputs his views and his experience, and he sees the deficits, the shortcomings that affect the overall picture for the judges and spectators.”

Trankov admits that he never really wanted to coach, but he didn’t want to turn down his former teammates.

“I agreed mostly because it is another challenge for me and also because I couldn’t decline their request, because they are my friends and they grew up in front of our eyes at our rink,” said Trankov. “I just couldn’t leave them alone in that difficult situation when we practically don’t have any new generation of pair skating coaches in Russia.”

Trankov feels he can develop the artistic side of the young team that technically, is already one of the best in the world. In addition, the skaters are also making some changes to their technical content. They added the throw triple flip to their repertoire and have been working on the lifts.

“It is interesting to work with Maxim, because he is in shape after all, he is performing in shows,” Tarasova pointed out. “In some lift, he is lifting me himself and shows us how to do it. That is good to compare. I can tell Vova (Vladimir) Maxim’s hand is there or here. It looks like a small change, a detail, but the lift as a whole works better. This is a big plus.”

In addition, Szolkowy is still on the team as well and will continue to work with Tarasova and Morozov. He will be joining them next month.

The World silver medalists built their new programs with choreographer Peter Tchernyshev, but are not yet ready to reveal the music.

“The short program has a rock theme. We chose the music together with Petia (Tchernyshev),” Tarasova said. “The free skating is completely different, in contemporary style. Maxim suggested the music for the free program and we really liked that music. That’s a totally different style for us, we didn’t skate to something like that before. It is more lyrical.”

The 23-year-old also pointed out that there is a sharp contrast between the short and free program. “They are absolutely different in the theme, the tempo, and the presentation of the program.”

Trankov added that he wanted his students to show a different side of their skating.

Since Trankov is performing all summer with his partner and wife Tatiana Volosozhar in Ilia Averbukh’s ice musical “Romeo and Juliet,” his skaters are traveling with him. In June, the team trained in St. Petersburg in the morning and afternoon and then Trankov went to the other ice rink to prepare for the daily show in the evening. After a short break, the show continued in Sochi and will go on until the end of September.

“Maxim already had signed the contracts for the summer when we came to him and asked him to coach us,” noted Tarasova. “He couldn’t cancel them and therefore we’re going where Maxim will be and have our training camps there.” “We spent a lot of time in Sochi before,” Morozov added. “We’ll train in the same rink in Sochi as usual and it’s nothing new for us.”

However, they are Trankov’s only students and will not train in a group like they used to.

“That will be some novelty for us, to be on the ice alone, just us,” commented Tarasova. “Maybe it will be a bit boring at one point, to skate alone, but it will be productive.”

“No, it won’t be boring, there is enough to do,” her partner objected. “We know that our competitors are training all the time and we need to compete against them. No matter if we are in a group or not, we need to do our stuff.”

As for the recent ISU rule changes, Tarasova feels this may result in an easier free skate in some ways.

“With the free skating being four minutes, and in other places they have become more difficult, we have to look for new levels of difficulty in the lifts and in the spins,” she said. “The old features don’t work for a level four anymore. You need to find something new, which is not easy to learn.”

“Four minutes will be fine. I don’t think it will be harder, maybe even easier,” Morozov agreed. “The only question is about the levels for some elements, how the judges will look at it. You can write it on paper, but how to do it is not always clear.”

Morozov is not certain how he feels yet regarding the new scale for the grades of execution (-5 to 5+). “Some people say it will be more impartial and other people say it will be less impartial,” he noted. “Again, it depends on the view of the judge. If the bullet points are fulfilled. Someone likes it (what you do), someone doesn’t.”

Like the other Russians skaters on the national team, Tarasova and Morozov will attend the test skates in early September in Moscow and present their programs for the first time to the public. Before heading to their Grand Prix assignments Skate America in Everett and Rostelecom Cup in Moscow, the two-time European Champions are planning to compete in a Challenger Series event and are considering participating at Finlandia Trophy.