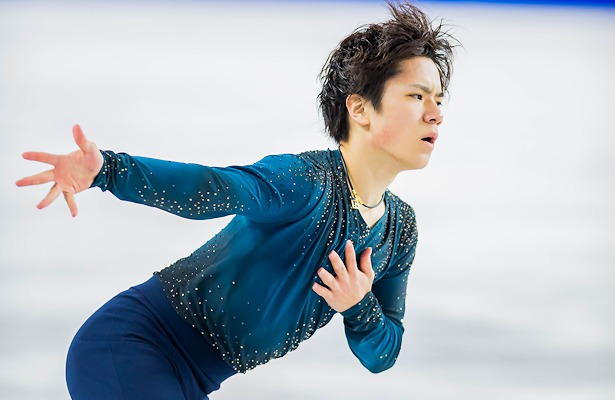 Japan’s Shoma Uno roared back from an error-filled short program to win the free skate and his second consecutive Skate Canada title in Laval, QC, on Saturday afternoon. Overnight leader Keegan Messing of Canada landed on the second spot on the podium while while Junhwan Cha of South Korea maintained third place to win the bronze—his first Grand Prix medal.

Uno caressed the ice and emoted throughout his gentle “Moonlight Sonata” free skate. The 2018 Olympic silver medalist managed a clean quadruple flip and two toe-loops, one in combination. The skater went down, however, on his late triple Axel-triple flip sequence and triple Salchow-triple toe loop combination. He scored first (188.38) in the free skate and overall (277.25).

“I was able to put in all the frustration from yesterday and I was able to perform the program,” said 2018 Olympic silver medalist. “I thought I’ll go all out from the beginning, so I went at 100 percent from the start. That’s probably why I did get a bit tired at the end. I made mistakes on the last two jumps, so this is something I’ll take as a task for the next competition.”

Coming off his first-place finish in the short program, Messing maintained composure in the free skate to land a quadruple toe loop and two triple Axels in his animated Charlie Chaplin program. The Canadian national silver medalist tripled his planned quadruple Lutz and tumbled on his second quadruple toe loop, but closed his routine with impressive spins that were well-positioned, fast and centered. He was second in the free skate (170.12) and maintained second overall with 265.17 points.

“I had a couple bobbles in the long, but I stuck with it and I had an absolute blast,” he added. “To walk away with a medal, I’m so honoured.””I’m overwhelmed,” said the 26-year-old after his performance. “The crowd was absolutely amazing and they really helped me through the whole program.”

It was the first time the skater went into the free skate in first place at a Grand Prix event.

“So the nerves were there,” Messing admitted. “My coach and I did our best to learn from the experience.”

Cha captivated the audience with his mesmerizing “Romeo and Juliet” program. The South Korean impressed judges with his musicality and ability to rebound from a tumble on his opening quadruple toe loop. He went on to land a quadruple Salchow, triple Lutz-triple loop combination and two triple Axels. He was third in the free skate (165.91) and overall (254.77).

“I think today my performance was pretty great,” said the skater who just turned 17 last week. “I really tried until the program was finished.”

“I really love it,” he said of his program choreographed by Shae-Lynn Bourne. “There are very exciting parts and there are very interesting parts. For this season I just want to get more experience from the competitions and grow up more from the skating skills and jumps. And the best thing is no injuries.”

Nam Nguyen of Canada climbed from seventh in the short program to fifth in the free skate and fifth overall (240.94). The 2015 Canadian champion managed a quadruple Salchow and two triple Axels.