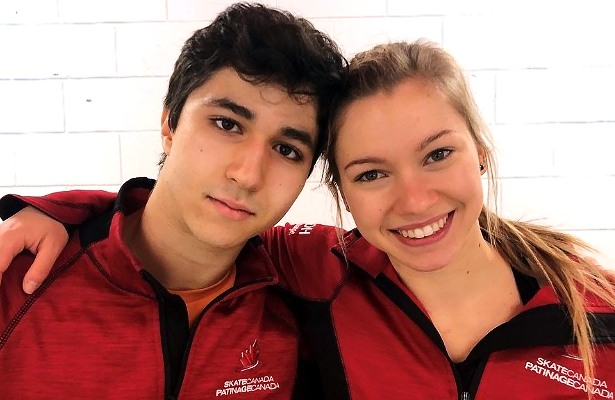 Marjorie Lajoie and Zachary Lagha of Canada have qualified for the 2018-19 Junior Grand Prix of Figure Skating.

Last season, the team trained alongside Olympic Champions Tessa Virtue and Scott Moir, who Lajoie looks up to. “It was really inspiring to see how constant and intense they were in training every day, and watch them perform just the same way in competition,” she said.

“There are a lot of incredible skaters,” added Lagha. “When I was young, I used to like to watch Nikita Katsalapov (Russia) and I really love his program this season. There are so many good skaters and there are things you can learn from each of them. The top ten in seniors last year was really strong! There is something interesting and unique about all of them.”

This season, the team is skating their Rhythm Dance (RD) to “Perro Viejo,” “Otro Puente Alsina,” and “Essa,” by a group Lagha found called Otros Aires. They feel this dance is much more difficult compared to that of last season.

“You have to be really sharp on the tango,” said 19-year-old Lagha. “The free legs, the edges… it’s more challenging than the Latin theme last year.”

“It’s really fun and it’s new for us,” said Lajoie, adding that the style is an interesting one. “It’s not like the classic Tango. We are doing something that is a little different and fun.”

At first, the team struggled to find music for their free dance, however, when Lagha proposed “Warsaw Concerto” by Richard Addinsell, everyone agreed it was a good choice.

“It’s a really rich music that hasn’t been used a lot in the world of figure skating,” he said. “We wanted to find a music that is close to our style for our last junior season.”

“What I like the most about the free dance is its intensity, especially at the beginning of the program, when we do the stationary lift,” said Lajoie. “I also really like how the music becomes slow and calm right at the heart of the program as it is, for us, a special moment of connection together, and it allows us to reset for the rest of the program. At the beginning of the season, we just did it with our intuitive feeling of the music. Now we have been working with a coach who helped us refine the story.”

“We have different interpretations and multiple stories to help us reaching a good level of connection between us,” said Lagha of the free dance. “Our story is not limited to a single story. The most important is to make the public feel emotions and we need different inspirations at different moments of the programs to deliver feelings to the people watching our programs. I particularly like the ending of the program,” said Lagha. “The main theme on which the music started comes back then, and the moves of the choreography are more sustained with every accent of the music. This makes the end very special to me.”

There was marked improvement in both dances at JGP Canada, which was held in mid-September. Combined with the silver they won in Austria, the team qualified for the Junior Grand Prix Final which will be held the first week of December in Vancouver, B.C.

“We actually changed half of our footwork and we focused on the turns for the training week that was before,” Lagha explained regarding the level three they earned in their midline steps in Richmond.

The team also earned a level four on the dance spin and a level three on the diagonal steps. Their win wasn’t that much of a surprise as they felt they had worked hard to improve since the JGP in Linz, Austria.

“It felt good!” said Lagha, of their win. “As usual, the Canadian crowd was awesome (especially for a Junior Grand Prix). They gave us so much positive energy before our programs and we had to give them something back! We delivered strong performances and were proud of our accomplishment. Indeed, it makes us be more confident moving into the Final. That being said, we still have a lot of work to do before presenting the programs in Vancouver.”

“We changed some risky elements,” Lagha revealed. “In fact, we slightly modified our spin and some details in the twizzles. We had a risky arm movement which led to a downgraded level at Linz. We also modified our one-foot work from a technical aspect perspective.”

“Obviously we were disappointed with our score at the first JGP, but the reasons behind the score were clear,” said Lajoie, who just turned 18 this month. “We were able to focus and improve in time for our second JGP, although there was only one week in between, and break the 100 points.”

“It was good to have broken the 100-point mark in the free dance,” Lagha added, “but we have to put this victory behind and focus on the training for the Final.”

While the JGP Canada champions are making changes to their dances, they also plan to continue to improve their lines and connection.

“As you know, those are things ice dancers keep working on their entire career,” noted Lagha. “Getting our key points consistently in the Rhythm Dance is important too.”

The ice dancers from Quebec have recently begun working with a performance coach and hope this will pay off at the JGP Final.

“One of my goals would be that we see the difference in the story-telling of the free dance,” said Lajoie. “I also really want the difference to be noticeable in our two dances from last season at this Junior Grand Prix Final.”

Lagha agreed, adding that he hopes they are able to deliver two solid performances in Vancouver next month.

“Of course we will have to improve the technical aspects of our programs, mainly in the RD and our lines,” he added, “but I think that once we will be at the Final, our main goal will be to set a new level of connection between us.”

Lagha is currently a student in CEGEP (Collège d’enseignement général et professionnel) while Lajoie will begin CEGEP next year.

When not training, Lagha likes to spend time with friends and also enjoys playing the piano, which he began playing when he was 4. Most recently, he reached the final round of the edition 2018 Canada Music Competition after performing a complete program of the piano repertoire, including the first movement of Tchaikovsky piano concerto no. 1, which was also played with an orchestra.

Lajoie is a professional actress which she says helps her in skating. Titanic is my favorite movie!” said Lajoie, while Lagha added that Shutter Island is one of his.

Lagha also enjoys Reggae. “Actually, my team leader caught me singing in the shower when we were competing in Australia. When I went to the rink the next day, he told me I sang really bad,” he laughed.

After the JGP Final, the team will prepare for the Canadian championships on the Junior level and hope to perform at their best for the 2019 Junior World Figure Skating Championships.”