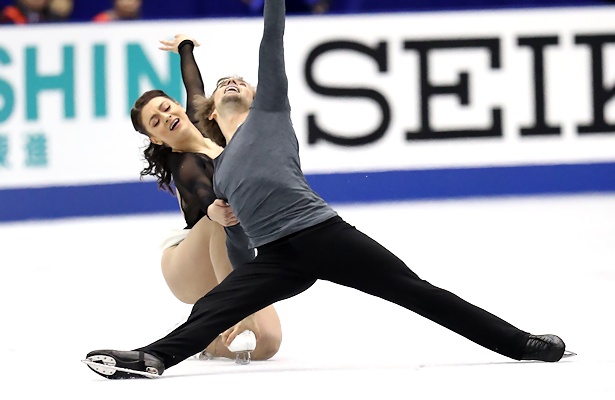 USA’s Kaitlin Hawayek and Jean-Luc Baker edged out Tiffani Zagorski and Jonathan Guerreiro of Russia to win the gold in Ice Dance in what was a tightly-contested affair at 2018 NHK Trophy on Sunday afternoon in Hiroshima, Japan.

“Our main goal coming into this event was to put out two solid performances,” said Baker, who is recovering from a concussion. “It is our first event (of the season), so we really wanted to get our feet wet as they say. We wanted to understand how our programs work, and we mentioned yesterday, it’s the start of a four-year plan for us.”

Skating to music by The Irrepressibles, the Four Continents champions delivered a curve lift-stationary lift combination and an exquisite midline step sequence. It was their second career Grand Prix medal, having won bronze at the NHK Trophy in 2014, and they also became the fourth U.S. dance team to win the event in its 40-year history.

“It was just such a pleasure and honor to be here performing,” said Hawayek. “It’s completely different, coming into this competition [as] we had just three weeks of training fully recovered. We were really relying on our eight years of skating together and the great team we have. We’re so excited to start our four years with our new team, and I think that’s why it’s different than Four Continents, because with Four Continents, we have an entire season behind us.”

Zagorksi and Guerreiro scored a total of 183.05 points after their performance to “Blues for Klook” by Eddie Louis in which a twizzle was missed as well as a one-point deduction received for an extended lift.

“Today’s performance was probably not one of our best,” Zagorski pointed out. “Overall, we’re still happy with what we put out on the ice. We’re still improving, and we’ll continue to improve and next time, do even better.”

“There’s always pressure,” said Guerreiro. “I think this was our first time leading in a Grand Prix going into the free, so I can’t say we mentally prepared ourselves the wrong way. It was just one of those mistakes, the twizzles, and a few of the elements after that were shaky.”

The former World Junior and Junior Grand Prix champions of the U.S., Rachel Parsons and Michael Parsons, discovered the podium at a senior Grand Prix for the first time with a bronze medal. The Americans from Maryland scored 109.57 free dance points to the music of “To Build A Home,” which featured strong level 4 twizzles and lifts. Their combined score was 178.64.

“This was our goal before this competition,” said Michael, “and it feels really good to accomplish that goal. Again, we left some points on the ice there with the levels, so there’s lots to work on for sure, but we’re really happy.”

“I feel like it was a really strong skate,” added Rachel. “We left points out there on the technical aspect that we know we can get and we are consistently getting in practice. We just need to transfer that into competition.”

Despite a one-point deduction for an extended lift, Lilah Fear and Lewis Gibson of Great Britain bested their previous score from Skate America with 113.29 points for a second place finish in the Free Dance. The team racked up many high grades of execution (GOE) for their elements, and moved up from seventh to fourth overall (177.20).