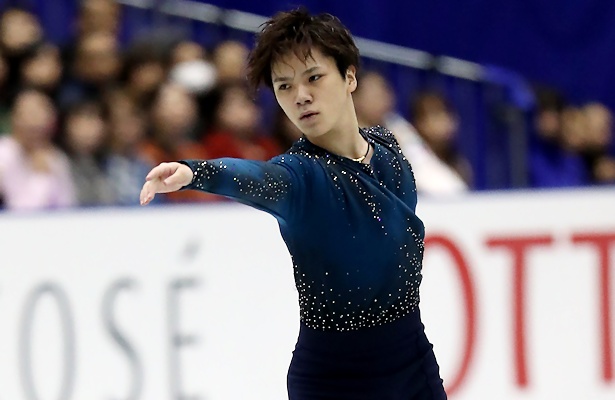 In his first appearance at NHK Trophy, Shoma Uno won the Men’s figure skating event with over 22 points to spare Saturday at the Hiroshima Green Arena.

The 2018 Olympic silver medalist under-rotated his opening quad Salchow and put a hand down on a planned quad toe combination as well as a triple Salchow. He also landed two perfect triple Axels and produced level four spins and footwork throughout his routine.

“I think today was one step closer to a good performance,” said the skater from Nagoya. “I wasn’t too happy with the combination jump, but compared to the short program, I really wanted to show myself what I am capable of in the long program.”

“I wanted to address my issues because I over-rotated too much,” Uno added. “I talked to the coaches, and I think we will be able to keep this program as is. I made some mistakes with my first combination jumps, but despite that, I was mentally able to keep it together. Believing in myself for both competitions, maybe in this long program, I was really able to believe in myself and put 120 percent out there.”

Reigning champion Sergei Voronov of Russia won silver (254.28) after his free skate to “Way Down We Go.” The 31-year-old opened with a quad toe loop and landed a triple Axel-double toe loop midway through his skate, showing good spins and footwork throughout.

“I want to thank the team who supported me in this free program,” said Voronov. “For two days, I was the last skater, so maybe it was destiny. It was very difficult for me to perform because there was a lot of blood on ice. I thought maybe this was a battleground, and that was distracting.”

Matteo Rizzo of Italy was all smiles after winning the bronze medal with 224.71, edging out USA’s Vincent Zhou (223.42) for the last spot on the podium. Skating to the music of the Rolling Stones, he scored 147.71 points with a big triple Axel-double toe, level 4 footwork and strong spins, but under-rotated several other jumps, including his opening quad toe.

“It was pretty amazing for my first year,” said the 20-year-old. “I think these two competitions were very important for me. One week in Japan for any skater is very much appreciated. I think my skating skills improved and all jumps are better, but the most important change for this season was to introduce the quad jump into competition. I think it’s the first time for a man from Italy to win a medal in the Grand Prix, so this is very important to me. It’s very important for me and my future.”

Zhou doubled his opening quad and under-rotated several jumps, including a quad Lutz later in his routine to from Crouching Tiger, Hidden Dragon and Rising Sun, but the U.S. Olympian found state of mind with two triple Axels.

“Overall, I’m reasonably pleased with how this competition went,” said Zhou, said the 18-year-old. “There was a really stupid mistake on the double Lutz. I should have had that just fine, but I had a pretty good go with the second quad Lutz to make up for the first one I missed. As far as the rest of the program, I felt it was really solid. I felt like I did what I could. At the beginning of this week, I didn’t even know if I would be able to compete.”