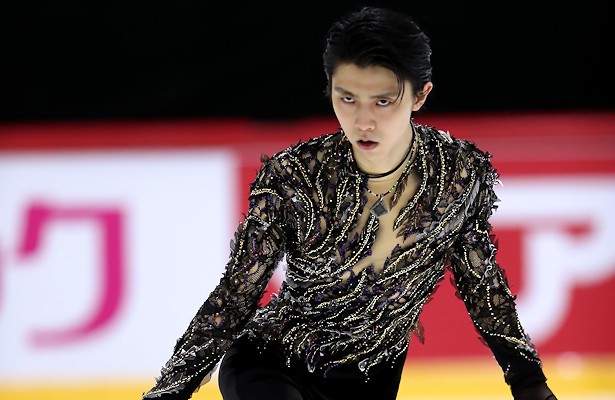 Yuzuru took a hard fall on a quad loop in practice, twisting his right ankle, and left the session early.

“The injury is not the same as last year, but it is very painful and it forced me to change my program,” said the 23-year-old. “I thought about withdrawing because of the injury, but it is my choice. I really wanted to skate this program in Russia.”

The two-time Olympic champion opted to open his routine with a quad Salchow. The skater was not perfect, falling on a under-rotated triple Axel and popping another, but still showed strong spins and footwork to easily win the free skate with 167.89 points. He was instantly showered with Pooh bears by appreciative fans at the end of his dramatic routine to music from Edvin Marton.

“I wanted to skate perfectly in Russia,” said the  two-time World champion. “Too bad that it was not possible. I did what I could do considering my condition.”

Kvitelashvili under-rotated a triple Axel, but landed two clean quad combinations and displayed level 4 spins throughout his routine to music from Mozart, L’opéra Rock, earning a season’s best of 158.64.

“I did everything as planned, but not everything went as smoothly as I would have liked,” said the Finlandia Trophy bronze medalist. “We’ll just continue to work. I am glad that I was able to show my program as clean as I could.”

Tomono had several under-rotated jumps and had a few minor mistakes throughout his routine to music from Riverdance, but landed a clean quad Salchow to score a season’s best of 156.47.

“Unfortunately I was unable to control my nerves and lost to myself, but then I was able to get a grip on myself,” said the 20-year-old from Osaka. “This is the first time I made the podium at a Grand Prix and I am very happy about that.”

Russia’s Mikhail Kolyada, who was in eighth after the short program, placed fourth in the free skate (156.32) and overall (225.42). His routine to music from Carmen featured a quad Salchow and quad toe-triple toe.

Alexander Majorov of Sweden fell from third to ninth (205.59) after an error-ridden program.