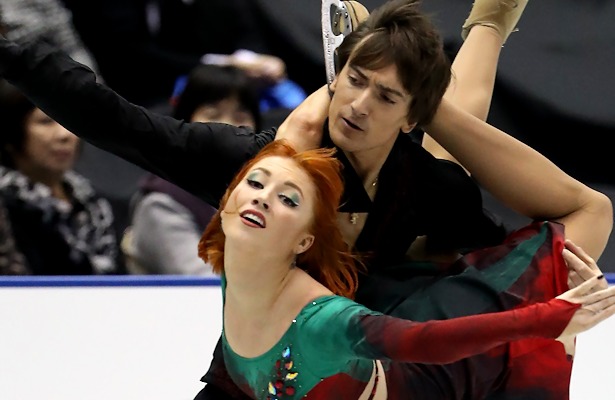 Tiffani Zagorski and Jonathan Guerreiro of Russia scored a new personal best of 75.49 points during their tango routine to take the lead after the rhythm dance at the 2018 NHK Trophy in Hiroshima, Japan, on Saturday, with two American teams in second and third.

“It felt good, but not the best,” said Guerreiro, “but we haven’t really traveled to Asia for a competition in a while. Hopefully, tomorrow, we’ll be better. I think the actual skate today, we did all of our elements.”

The Skate America bronze medalists produced strong level 4 twizzles and met seven of eight of their key points in the tango pattern, colorfully ending their routine with a level 3 midline step sequence.

“It wasn’t our best, it wasn’t our worst, but we did fine,” said Zagorski. “We just want to do the same tomorrow, put out a nice performance, and hopefully do better than our last Grand Prix. We received a few deductions (at Skate America), and we decided we’d change a few things to show the free dance as a whole.”

Skating to “Vuelvo Al Sur A Los Amigos,” USA’s Kaitlin Hawayek & Jean-Luc Baker produced solid level 4 twizzles, and while their exquisite midline step sequence was only graded a level 2, the element scored the highest of all teams of team due to high grades of execution (GOE). They concluded with 70.71 points and sit in silver medal contention.

“We’re both really excited to be doing a tango,” said Hawayek. “It’s something neither of us has performed with previous partners. We like the style, it’s a fun dance. We felt there were a lot of things from last year that we continue to build on and improve on. We have some level things we’re working on in the tango, but overall, we’re happy with the progress we’ve made.”

The high scores at the NHK Trophy were also refreshing for Baker, who is recovering from a concussion he suffered while training in Montreal. The team entered senior B events in preparation for the Grand Prix series.

“It’s an ongoing process from sure,” said Baker. “In early August, I fell over skating and hit myself in the back of the head.”

Teammates Rachel Parsons and Michael Parsons showed a good level 4 curve lift and twizzles in their tango to score 69.09 points.

“We need more levels,” said Rachel. “We need to nail our consistency, showing we can go out there and get everything technically down. I think we’re on the right path, we just want to get there faster. Everything’s a work in progress.”

The brother-and-sister tandem is trying to break through with a gold medal this season after three-consecutive silvers at ISU events – the Asian Open, Lombardia Trophy and Nebelhorn Trophy.

“That’s the only thing we left on the ice today, was we needed more levels,” said Michael. “One of our main goals this season is to show we are a consistent team. We’ve started off much better this season already, as opposed to last year. Everything’s a journey right now, and we’re still half way through the season.”

Right on their tails are the 2018 Asian Open champions, Shiyue Wang and Xinyu Liu of China, with 66.27 points, followed by the 2018 Four Continents silver medalists Carolane Soucisse and Shane Firus of Canada (66.01).

“We were both very present,” said Firus. “We had moments where we really connected with each other and the audience.”