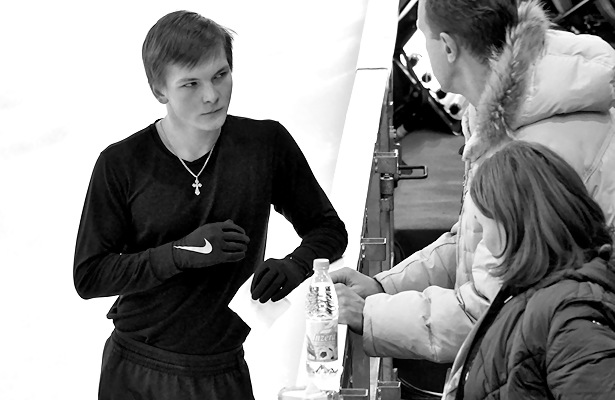 When Mikhail Kolyada stepped onto the ice for the 2019 Russian National Championships, he didn’t know if he would be able to finish the performance or if he would pass out halfway through. Fighting bad sinusitis, the reigning World bronze medalist had come more or less straight out of a hospital bed to the competition in Saransk. However, the skater pulled off two decent performances to take the silver medal and earned a spot on the team for Europeans at the end of January.

This silver medal behind Maxim Kovtun is almost worth more than gold to Kolyada, who was the defending two-time national champion. He feels that he learned something new about himself. “I opened up some reserves in myself,” he said. “I just knew what I had to do and I did it and that’s it.”

Kolyada had come down with sinusitis on the right side this past summer and underwent treatment, but apparently never quite fully recovered as it surfaced again just before nationals. On the Thursday evening practice at home in St. Petersburg, exactly a week before the Men’s Short Program in Saransk, Kolyada suddenly felt unwell. He went home, hoping to feel better soon. Instead, it became much worse.

“I woke up in the middle in the night and felt that I am somehow really not well,” the two-time European bronze medalist recalled. “I got up, rinsed my nose, put drops in my ear and it didn’t help. I realized that I have to go to Russian Nationals and I can’t miss a day (of practice).”

When the skater went to the hospital the next morning, they took X-rays and informed him that he needed to be hospitalized immediately. Kolyada discussed the importance of the event that he didn’t want to miss, and while the doctor staff consulted with a sports physician, he called his primary doctor who told him he needed to follow orders.

While in the hospital, he underwent endoscopic sinus surgery to clean the sinuses. “On that day when everything came out, everything hurt terribly,” the skater said.

He stayed in hospital over the weekend and was released on Monday. On Tuesday, he took the plane to Saransk, still not having been on the ice since Thursday.

“The flight was terrible,” Kolyada recalled. “We had two flights – one to Moscow and then one from Moscow to Saransk. From Piter (St. Petersburg) to Moscow, my nose was bleeding. On the take-off and landing everything hurt terribly. It was like the eyes were popping out of my head. I didn’t know what position to take anymore. That was because of the change of air pressure. To Saransk it was the same.”

Despite the pain and lack of practice, the two-time national champion was determined to compete.

“Of course (I wanted to compete),” said Kolyada. “This is the starting point for Europeans and Worlds and I had to go through it. I am really very happy with how it went. Everything that doesn’t kill us makes us stronger.”

“I knew exactly that even in this condition I could skate at the least the short,” he continued. “There were big questions about the long. I decided after the short, if I skate the long or not. We took the decision to skate, with an easier version and that was the right decision.”

Kolyada and his coach Valentina Chebotareva decided to take out the quad Salchow and the second quad toe, but there still was a quad toe and two triple Axels in the long program. On the ice, it was still not easy for the skater.

“My head was spinning,” he recalled. “I was in that (strange) condition, somehow sluggish. When they released me from hospital, I had even trouble talking. That is, I was thinking, before saying something and I spoke slowly.”

The doctors eventually gave the green light to compete and the coaches told Kolyada that it was entirely up to him to decide if he would compete or not. He decided he wanted to try, no matter what. “As they say, ‘it is better to try and to regret than to regret not to have tried,'” he pointed out.

After his performances, especially after the free skating, Kolyada almost collapsed. He made only one serious mistake in the long when he fell on a triple Lutz.

“There, to be honest, my consciousness was starting to fade away,” recalled the 23-year-old. “I don’t even remember a lot how all that happened. That is, I did the footwork and half of it I just can’t remember now. And the spins, of course. When I am spinning, it all starts to flow in, hurts. Not a nice feeling and the breathing gets out of rhythm, naturally. And when the breathing is off, the rhythm of the program is off and it is hard to get back into it.”

“I never have felt as bad as I did (after the program),” said Kolyada. “Who came to me, said something, I don’t remember that at all. We went to TV, they did an interview, I don’t even remember what I said. I was in such a condition that I couldn’t even focus, my vision was blurry. And then, when they took me to the anti-doping control, I saw stars, spots … The doctors said that it comes from a major lack of oxygen, hypoxia.”

Kolyada started to feel better over the next few days and attended the awards ceremony, but wisely withdrew from the exhibition gala. However, he regretted not being able to show his new fun “Charlie Chaplin” exhibition program that he had prepared.

After returning home to St. Petersburg, the plan was to see the doctors again, rest up and get healthy before hopefully returning to the ice on January 2 to prepare for Europeans. Kolyada feels he learned a lot from going through this ordeal.

“It is like a snowball,” he described. “At first a little bit, it is still okay, tolerable. Then, it becomes more and more. You realize that it is hard for you, but you still manage somehow. You forget about it ‘oh, it’s working, great.’ Then, when this snowball presses you down and you realize ‘that’s it,’ you can’t get out, then you take the shovel and start digging.”

“I think indeed I somehow switched my mindset,” said Kolyada. “I didn’t think about Russian Nationals, I didn’t stress myself out with extra thoughts. That is, I left the hospital and I didn’t know what would happen. It was just interesting for me to watch myself like from outside, if I manage, good. If I don’t manage, that means there is room for improvement. Actually, there’s always room for improvement. It was a kind of, I wouldn’t say painful, but useful experience.”

Kolyada, who medaled at all three challenger series events this fall, is optimistic to be ready for Europeans that start January 21 in Minsk, Belarus. “This is generally a good amount of time (until then), I can prepare. Before I got sick, I skated my program with three quads (one Salchow and two toes), and I think at Europeans I will skate this version. At the beginning of the season, I said that this is my construction kit. That is, I tried this, I tried something else and I felt what I can do and what I can’t and I chose a final version. I like it and I can do it and need to do it.”