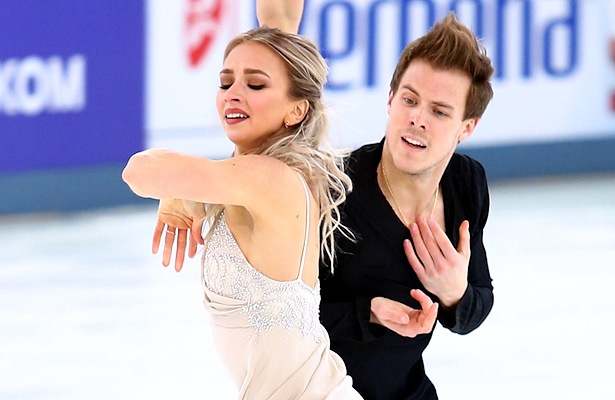 A year ago, Victoria Sinitsina and Nikita Katsalapov withdrew from Russian Nationals during the free dance as he suffered an injury and their season was over. This year, they came back to take the title. Alexandra Stepanova and Ivan Bukin settled for the silver medal as they did the previous year, while Sofia Evdokimova and Egor Bazin somewhat unexpectedly captured the bronze medal.

Sinitsina and Katsalapov turned in a beautiful performance of their “Air” program, seemingly effortlessly executing intricate footwork and exiting lifts. The ISU Grand Prix Final silver medalists earned a level four for the lifts, their spin and her part of the synchronized twizzles. The other elements were rated a level three. The Muscovites scored 128.31 points, which added up to 212.32 points overall.

“We left everything on the ice today,” said Katsalapov. “I was very nervous before the performance, but we looked in each other’s eyes and skated like one. I am grateful to Vika that she helped me to become Russian Champion.” It was the first National title for the team and for both partners.

Stepanova and Bukin’s blues routine to “I am the One” by Beth Hart is a completely different, but not less fascinating program, and shows the dancers from a new, sultry standpoint. They had almost the same levels as the winners, except that both picked up a level four for the twizzles. The two-time European bronze medalists earned 126.54 points and remained in second place at 208.49 points.

“We didn’t skate without mistakes at nationals and we know what we have to work on, ” Stepanova noted and elaborated: “There is nothing we can leave out. We have to work on everything—on technique, emotions and our mistakes, every day. You need to skate perfectly.”

Evdokimova and Bazin delivered a powerful dance to “Nocturne” by Secret Garden and “Sarabande” by Globus that featured four level-four elements. The team from Togliatti in the Samara region in the south of Russia received 109.34 points and pulled up one spot on 179.21 points overall.

“We fought until the end and we were not looking at the marks of others,” said Bazin. “From the beginning of the season, we aimed at third place at nationals and we got this result.”

Betina Popova and Sergey Mozgov came in fourth with their dramatic program to “The Master and Margarita” with 176.93 points, followed by World Junior Champions Anastasia Skoptcova and Kirill Aleshin, who skated to an unusual version of Michael Jackson’s song “Bad” (175.10 points).

There was drama around Tiffani Zagorski and Jonathan Guerreiro, who appeared to be a lock for the bronze medal. However, after the first lift, the laces on Guerreiro’s left boot became undone and the program went downhill. Zagorski had trouble with the twizzles and the one-foot step sequence and the straight line lift garnered only a level one. The choreo lift was shaky and the whole program to “Blues for Klook” wasn’t up to par. The ISU Grand Prix of Figure Skating Finalists dropped from third to seventh (171.76 points).

“Unfortunately, this was the worst performance we’ve ever had. I knew we could have stopped, but I didn’t want to get the five points deduction, although eventually we lost more points than if we had stopped right away and skated the rest of the program clean,” Guerreiro explained.

There is still the chance that Zagorski and Guerreiro will be named to the team for Europeans as their case will be discussed by the coaches’ council on Sunday.